It’s safe to say that the NES Classic is a hit, since the $60 mini version of the famous Nintendo Entertainment System has been selling out faster than Nintendo can keep it in stock. Even though the NES Classic is bringing back a lot of good memories for gamers who grew up playing games like Super Mario Bros. in front of a CRT TV, it does have some problems that can’t be ignored. The biggest problem is that the library of NES games on the console, which is mostly made up of the best and most important games ever made for the NES, is too small, with only 30 games. This means that a big chunk of the NES library is missing.

Now, it’s true that most NES games haven’t held up well over time, so it would have been irresponsible of Nintendo to pack it full of games that no one would ever want to play, but there are still a lot of games that need to be on there. Even though licencing and other issues may have kept many of the following 30 games from making the cut, think of this as our wishlist of NES games that also deserve to be included on the NES Classic. We’ve put them in alphabetical order to make things easier for you. Hudson Soft’s sequel to the original Adventure Island came out in 1991. It added an inventory system and the ability to collect and ride dinosaurs, both of which improved on the simple platforming gameplay of the first game. In other words, Adventure Island II is a follow-up game that knows what’s important. In Adventure Island II, the main character is a yachting playboy named Master Higgins. You have to explore eight different islands, sometimes while riding a skateboard, to find a beautiful princess who was taken by an evil witch doctor. Even though the story isn’t the most interesting, Adventure Island II is a great NES platformer that is often forgotten. A spot on the NES Classic’s library would help to change that. 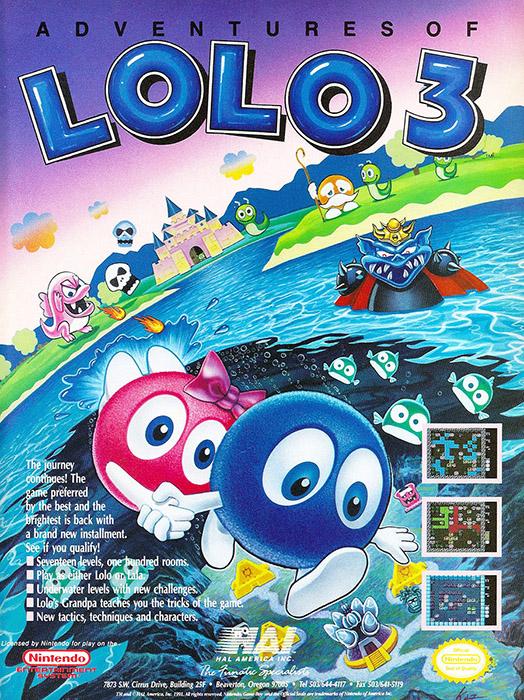 Adventures of Lolo 3 was made by the talented people at HAL Labratory, which is best known for making Kirby and his many great games. It is the best and most loved of the three Adventures of Lolo games for the NES and one of the best puzzle games for that system. Don’t be fooled by the cutesy look of the game. Adventures of Lolo is a busy and difficult puzzle game that never feels unfair. Victory always seems close, even when it’s clear that it’s not (the game actually gives you the option to kill your character if you get trapped or find yourself unable to proceed). Puzzle games are more popular than ever because of the rise of mobile gaming. Adventures of Lolo 3 is the perfect NES game to play again because it’s still as fun and rewarding as it was when it came out 25 years ago. It’s no secret that most licenced NES games are bad, and Batman has had more than his fair share of really bad video games. However, the NES movie tie-in game based on 1989’s Batman was not only good, but it was arguably one of the best platformers on the console that didn’t feature Mario. Batman: The Video Game, which was made by Sunsoft, isn’t as good as modern Batman games like Rocksteady’s Arkham Asylum, but it’s still a good take on the Caped Crusader on its own.

This was the first game that really let players feel like they were Batman. It had many of the hero’s moves and gadgets, like the grappling gun, which made the platforming more fun. Even though it might be hard to put this game on the NES Classic because of licencing issues, Nintendo should try to find a way to do it. Both gamers and Batman fans need to be reminded that there were good Batman games before 2009. Battletoads was probably too hard to get for the NES Classic library, like a lot of the other games on this list, because Microsoft owns the rights to the game. Still, Nintendo could probably work out a deal that would let them use the game, and if they did, Battletoads would be a great addition to the Classic’s library. Battletoads was probably one of the hardest games of its generation, if not of all time. It was a test of gamers’ patience and raw gaming skills for a whole generation, and finishing it is a badge of honour for those who did it.

Even though it’s hard for most people to get past the first level, Battletoads is still a fun game. It’s a beat-em-up, the graphics are good for the time, and, as usual with Rare games, the soundtrack is great. Battletoads probably won’t ever make it to the NES Classic. However, it was included in the Rare Replay collection that came out on Xbox One last year, so you can always play it there. Bionic Commando by Capcom is still different from other games like it. Bionic Commando is a platform game, but it doesn’t have a jump button like almost every other game of this type. Instead, you use your character’s bionic arm to hook onto platforms and swing around levels like Spider-Man with very few abilities. This may sound silly and not very fun, but Bionic Commando’s unique way of getting around is actually a lot of fun once you figure out how it works.

The game also takes a page from the Metroid playbook in that you have to find certain weapons and tools to move forward. When you add a fun story in which you fight Nazis as Rad Spencer—still one of the best names for a main character in a video game—you get one of the best and most creative games on the NES. It’s too bad that it’s not on the NES Classic, where it should be. There weren’t many racing games for the NES, and even fewer of them were good. Even though the controls and graphics in R.C. Pro-Am aren’t very realistic, the game is a fun and challenging isometric racer that influenced the genre for years to come. Even though Microsoft now owns the series, they haven’t been doing much with it lately. This makes it more likely that they could work out a deal with Nintendo for this one.