These Harry Potter games are for people who whisper “Wingardium Leviosa” in their sleep and sometimes wake up to a floating pillow. Ranked from “pretty fun” to “out of this muggle world”, these are the best Harry Potter themed board games for your next post-Triwizard Tournament gathering. 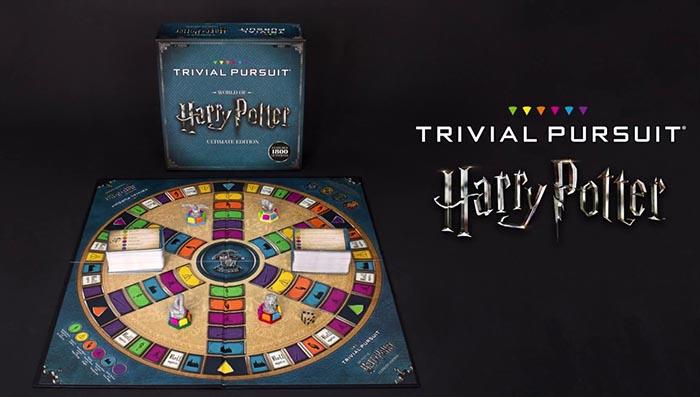 Trivial Pursuit is a classic game for a reason: the rules are easy to understand and the questions are hard. This ultimate version of Harry Potter Trivial Pursuit has 1800 questions based on the movies, including information from all 8 of the movies.

The house crests of Gryffindor, Slytherin, Hufflepuff, and Ravenclaw are on the four custom movers that come with the game. The question categories are magical places, objects, and artefacts, the dark arts, spells and potions, magical people and animals, and magical creatures. This game is a good way to see how much you know about movies. It’s best to play it with a group of people who know the movies, so no one gets stuck and gets left behind.

Hedbanz is a great party game for people who are at least 7 years old. This silly guessing game can be played by 2 to 6 people. Each player has a headband with a card on it that they wear. The card has a picture of something or someone that belongs to a category, such as creatures or spells.

Players have to ask others “yes” or “no” questions to try to figure out what’s on their card. If they’re right, they get a chocolate frog token and get a new card. Potion tokens make the game more interesting by making it so that you have to act out, rhyme, or describe a clue. The winner of the night is the first person to get 5 chocolate frog tokens. This version of the classic game Clue is a lot of fun. In this version, the game board is a map of Hogwarts, and players move around the school to try to figure out what happened to a missing student. The board is different because it has wheels that, when turned, can show hidden passages and move the rooms.

Players can choose to be Harry, Hermione, Ron, Ginny, Luna, or Neville. The goal is to find out who attacked the student who went missing, what spell they used, and where it happened. When a player is ready to make an accusation, they move to Dumbledore’s office, keeping an eye out for the Dark Mark along the way. Players can use Help cards to protect themselves from the Dark Mark. This is one of the best Clue games with a theme, and it’s a lot of fun for the whole family.

Pictopia is a picture trivia game, so even non-readers in your family can play if they want to join in on the witchcraft and wizardry. The game has 1000 questions about all of the Harry Potter movies, even “Fantastic Beasts and Where to Find Them.” Trivia fans will enjoy this game because sometimes the group works together and sometimes each player works on their own.

It makes people less competitive and more willing to work together. Before hearing the question, players look at the pictures on each card that is drawn and bet based on how well they know the topics and how likely they think they are to answer correctly. This is a fun game for the whole family and goes well with a Harry Potter movie night. In this version of Codenames, the cards have both words and pictures on them, which makes the game more interesting and fun. The cards have information from the Harry Potter universe, but the rules of the game allow people who don’t know as much about Harry Potter to join in.

Like in the original game, there are two teams that compete against each other. Each team has a player who gives one-word clues about secret agents on the cards. The players want to guess the right cards for their team, but they don’t want to help their opponents by guessing their cards by accident. Both teams should try not to pick the Death Eaters, because we all know that can’t end well.

Labyrinth is a game of strategy that both kids and adults can enjoy. As in the original, the game board has a moving maze with paths that change every time a player pulls and replaces a tile. Players move their pieces around the labyrinth to try to get to the treasures first and keep the other players from getting there.

The treasures look like creatures and people from the world of Harry Potter, and the board is covered with spells. This game is hard and fun to think about, and this version lets fans collect their favourite Harry Potter heroes and bad guys. It’s hard to argue against the fact that a game that players build themselves before playing deserves a high spot on the list of best Harry Potter games. This LEGO set comes with all of the pieces you need to make a board that looks like the Hogwarts School of Witchcraft and Wizardry. The goal is to get items from different classrooms that match the Hogwarts house you are playing for.

The winner is the first person to bring all of their things back to the common room. Because this board is made of LEGO, it can be built in any way the players want. This gives them an edge over their opponents and throws them off. As they try to get to the common room, players run into magical obstacles. This is a great game to test your creativity and play over and over again, since each time the board is different.

A Harry Potter Edition Of Clue

A classic game gets a magical twist in the Clue: Wizarding World Harry Potter edition. You can move around the board as your favourite characters, like Harry, Ron, and Hermione, to figure out what’s going on. For a unique HP twist, players can move the wheels in each corner of the game board to reveal changing staircases, secret passages, directions to different rooms around the board, and more. This is a great addition to a game night with the family or a party with a Harry Potter theme.

“This Harry Potter Clue is so much fun,” said a reviewer. You never know if you’ll be able to get in or out of a room because the doors lock and unlock. There are also dark cards that will cost you house points if you don’t have a certain spell or ally card. Our whole family really likes this!”