Since 1993, when Magic: The Gathering’s alpha set came out, people have been able to play competitive card games. Since then, a lot of different companies have made their own card games based on their own franchises or on new ideas.

In the modern world, many companies have made their card games available online. Virtual card games are something that every gamer should try at least once, whether they are on a phone app or on Steam. The best digital TCGs give players a way to get the cards they want without having to spend too much money. They also have fun and healthy ways to play. Yu-Gi-Oh! Duel Links is a phone app that lets players use their favourite archetypes from the original Duel Monsters series. The player skills are different, and you can play as different characters from different series. There are also a few other things that make the game different from the real-life game.

The idea behind Duel Links is fun, but it’s hard to get new cards because of how the boxes work. Online games should have a way for players to make the cards they want, but Duel Link only gives out random packs and doesn’t have a good crafting system. This makes it hard for players to finish their favourite decks.

Vanguard Zero is based on the popular anime show Cardfight!! Vanguard and the physical card game with the same name. It has changed the way the game is played with new ways to guard. If you’ve liked Bushiroad games in the past, you should try Vanguard Zero.

After moving into the “G” era, the game is in an odd place. Even though the game has become more difficult and requires more skill, it is now harder to get a full deck thanks to a new “hard-to-pull” rarity. Players can make their own cards, which they can’t do in Duel Links. However, making the new “Generation Rare” cards requires a lot of grinding or spending in-game money. Fans of The Witcher may have heard of Gwent even if they have never played the digital game. Gwent is a game inside a game that has been made more official outside of The Witcher series.

Gwent does a great job of giving players a strong deck quickly. The rewards are good, and the scraps system lets players open packs more often and make cards they want. Gwent isn’t as complicated as other games, but it can still be fun for both casual and serious players.

Riot’s TCG, Legends of Runeterra, is for people who like League of Legends or Arcane. The cutest and coolest champions from League of Legends fight each other in this epic card game that has parts of both Magic: The Gathering and Hearthstone.

With Legends of Runeterra’s wildcard system, players can exchange a wildcard for any card of the same rarity. This makes it easy for fans to put together decks quickly. The fighting is different and fluid compared to other trading card games, and the meta is usually pretty good, too. Slay the Spire is a great game for people who like to play card games but don’t always want to play against real people. Slay the Spire is a PvE TCG where players build a deck by slowly adding cards as they climb the spire and face new enemies who give them new cards each round.

Fans of Slay the Spire can play the game as much as they want for free after the first purchase on Steam or the Nintendo Switch. There is no need for DLC.

Hearthstone’s biggest flaw is also what some players like best about it: the large number of random card effects. The signature TCG of one of the best MMORPGs, World of Warcraft, is for players who are willing to give up some of the competitiveness that comes with consistency in exchange for random things that make every game feel different.

Hearthstone’s crafting system works well, but if a player wants to make more than one deck per expansion, they may need to spend real money. Pokémon TCG Online is the next best thing for Pokémon TCG fans who don’t live near a game store. Not only do the new releases match the physical game, but players can also enjoy the same wide range of rarities and art styles (a unique trait to online TCGs based on physical games.)

The money system is the only problem with Pokémon TCG Online. Even though in-game currency can be used to buy a few packs, the only way for players to get specific cards they want is through codes that can only be found in real packs. Paper TCG players who don’t play online can sell players codes for a reasonable price, but it’s still more expensive than most online TCGs.

Master Duel is much better than Duel Links for most people who want to play Yu-Gi-Oh digitally. Not only is it more like the paper game, but the unique royal finish rarity cards give players the same excitement of opening real-life packs and looking for a special card.

Master Duel has a lot of in-game money that can be used to buy packs and a good crafting system that lets players trade a few cards they don’t want for one card of the same rarity they do want. Master Duel is probably the most complicated and competitive digital trading card game, just like Yu-Gi-Oh is in real life. But players who don’t quite understand the many new summoning rules can always play in solo mode if they just want to play with their friends using their favourite classic Yu-Gi-Oh card. 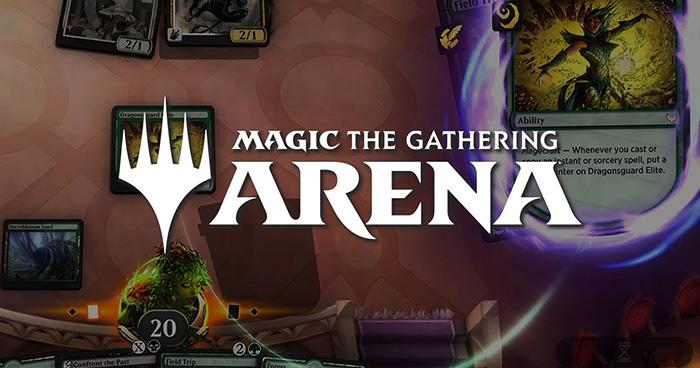 Hearthstone’s success led to a lot of new ideas, but it also led to a lot of copies. As soon as game companies around the world heard about the CCG hit, they rushed to make their own version of it and try to get a piece of the pack money. There are a lot of digital card games that aren’t Hearthstone, but none are as close as Magic: The Gathering Arena, which is the digital version of the physical CCG. How could they, with such a history behind them?

Arena is a digital version of the popular trading card game designed by Richard Garfield. It uses the same rules and card pool, but adds fancy graphics, voice acting, animated card effects, single-player campaigns, and tonnes of other content.

It took Wizards of the Coast a few tries to make a really good digital version of its most popular card game, but Arena is a very polished and easy-to-use way to play Magic: The Gathering. If you want to learn how to play MTG, you’re better off downloading Arena than buying a physical starter kit.

It makes sense that Arena would be the top challenger to Hearthstone’s position as the best digital card game. Before Magic was even on the internet, it had been around for decades, so it already had a huge fan base and a lot of experience making money. Since there is no cost to join and a huge number of people play MTG all the time, there are always new cards, new ways to play, and all kinds of events to take part in. If you don’t like Hearthstone, why not sit down with one of the old masters?

Many modern digital card games have tried to copy the way Hearthstone works, but with one or two interesting twists to make them stand out. Some games have more than one lane, use commanders as units, let you draw from more than one deck, or even let you build your deck as you play. Grid-based, tactical movement has been a mainstay of turn-based video games for decades, but it isn’t used nearly enough.

In most card games, the units you bring to the battlefield just stand in a line and attack or defend. They don’t really do much else. When you add a physical space to a card game, you have to think about more than just the cards you play. You have to think about when and where you place them, how they move and attack, and how their position on the battlefield affects your overall strategy.

Faeria looks a lot like Blizzard’s monolithic card game, but as soon as you start a game, you’ll notice that the field in front of you looks different. You and your opponent are separated by a big mess of hexagons, which is strange because none of them have anything in them. That’s because in Faeria, you not only place your creatures on a hex-based board, but you also build the board as you play. Each turn, you’ll use different tiles and cards to expand your territory, either getting closer to your opponent to attack them or trying to take control of the magical wells that are spread around the map. These wells are an important resource. If you play smart, you can starve your opponent of the points they need to defend themselves before going in for the kill.

Faeria is one of the most creative player-versus-player card games out there. It has a lot of smart ways to introduce new players to its format, like the Codex system. In Faeria, building a deck is a lot easier and more guided than in MTG, but it still has all the depth and variety that players have come to expect from the genre. It strikes a good balance between the top end of the spectrum, where very competitive users will make crazy creations, and the bottom end, where new players can try things out without being left with nothing but a starter deck and the shirt on their back.