Board games that allow players to work together to win as a team are some of the most popular on the tabletop. Players can either beat the game itself or work toward a shared goal.

When you play a co-op game, you work together with other people. Some games, like Gloomhaven, are huge boxes filled with miniatures and hundreds of tokens. Other games, like a simple pack of cards, are all you need to have fun. A game might have you rolling dice against the clock, flicking discs around the table, or even facing an AI opponent that’s run by a smartphone app.

These games come in all shapes and sizes, but the best co-op board games all have one thing in common: they let everyone around the table come together and share in defeat or victory. Many cooperative games have more difficult challenges for players to work together to solve as a group, while others are a more relaxed way to enjoy a fun story with your friends.

You can play simple games with just one other person to big games that will keep you and your friends busy for hours. Gloomhaven has quickly become known as one of the best co-op board games of the last few years, joining the likes of Pandemic and Arkahm Horror as a modern favourite.

The game Gloomhaven has become a huge hit because it’s a great mix of fantasy roleplaying, innovative legacy games like Pandemic Legacy, complex strategy games like HeroQuest, and dungeon crawling in the style of HeroQuest.

There are dozens of unique scenarios that players can play as a group of adventurers, going through each of Gloomhaven’s hex-based levels together to fight monsters and find treasure. Combat is controlled by each character’s deck of cards, which makes for a very strategic game that can be changed as players add new cards to their deck. Between missions, the group goes back to the city that the game is named for to experience story-driven events. Gloomhaven’s legacy game elements keep changing the world through stickers, destroyed cards, and more.

Founders of Gloomhaven is a game that tells the history of the city. Jaws of the Lion is a game that is easier for newcomers to learn about Gloomhaven. There’s also a huge follow-up called Frosthaven, and the hotly-anticipated new board game will be out in 2022. Until then, the original is still one of the best co-op board games ever made. It’s the perfect replacement for a weekly D&D session in a single, but very big, box.

2. The Crew: Quest for Planet Nine A few years ago, The Mind was thought of as the best cooperative card game. If you can’t talk to each other while playing, it makes for an interesting game experience. But it’s always felt a little too simple. Because of this, The Crew: The Quest for Planet Nine is a great co-op card game. It takes the main idea of The Mind, which is that you can’t talk to each other, and expands on it to make it more difficult.

The Crew is a trick-taking game at its core, which means that players lay down cards of the same suit, and the player with the highest number wins that round. The Crew turns the vastness of outer space into a short little game that tests players’ attention spans. Each game of The Crew is about players working together to meet a set of goals. These goals can be simple, like having the last round be won by a card of a certain suit, or more complex, like having to play each round of each suit in a certain order. They also have to watch other people play and keep in mind what their goals are because they can’t talk to each other.

In some versions of The Crew, players can use certain cards to help their fellow astronauts figure out what they might have in their hands. Finally, players should be able to play without these helpers, because The Crew is also good at making things more difficult. Get ready to go on a journey into space in this fun co-op card game. Mansions of Madness is a game set in the Lovecraftian world of the Arkham Horror Files series. Players go into spooky houses (and sometimes creepy city streets) to find out what happened to the people who lived there – and try not to be killed by the same thing.

In the second edition of the co-op board game, the antagonistic dungeon master-like human player is replaced by a companion app. This adds to the mystery as events happen at random and players’ investigators race against the clock to find clues before it’s too late.

Game play is simple. Each unique investigator moves around, interacts with objects, and fights off creatures from other worlds when it’s time. There are some familiar faces from Arkham Horror and Eldritch Horror in the game.

Mansions of Madness is great because it has a spooky atmosphere. Every new room has a chance to tell a story or find something new. When investigators search for the same thing again, they can get different results.

For friends who want to do something more than just watch a scary movie together, Mansions of Madness: Second Edition is one of the best co-op board games to play. You might not live, but you’ll have a great time together. Too many board games give colonialism centre-stage, tasking players with taking control of parts of the world and exploiting them for their own gain without a second thought. It turns the colonialist model on its head in Spirit Island, which puts players in charge of powerful natural spirits who must drive invading forces away from their island.

In Spirit Island, like Pandemic, the players work together to control and stop the threat on the board from spreading. This time, it’s European colonisers, not diseases, that the players have to control and stop from spreading. Each spirit has a special ability that can be used to protect the Dahan in the area. They can use their power cards to make the invaders afraid, which will make them leave. To keep everyone on their toes, add some traitors to the mix. This is done very well by Unfathomable, and the end result is good, so this is a good thing. You could say it was very, very good.

A small miracle: To be honest, it’s also a little miracle. Some board games are out of print, and this happened to a great Battlestar Galactica tie-in from the 2000s. Good news: This new “spiritual heir” gives the idea another chance. Even though it’s set in the Arkham Horror universe, Unfathomable still has the same great gameplay that made Battlestar so great.

This is how it works: You are human beings trying to steer your passenger ship away from Deep Ones, while also trying to protect yourself. Other than me, the rest of you are “hybrids” who want to sabotage the ship in secret. This means that you can’t trust anyone, so don’t. Because you need to work together to win, it’s a fun Catch 22 to play with. 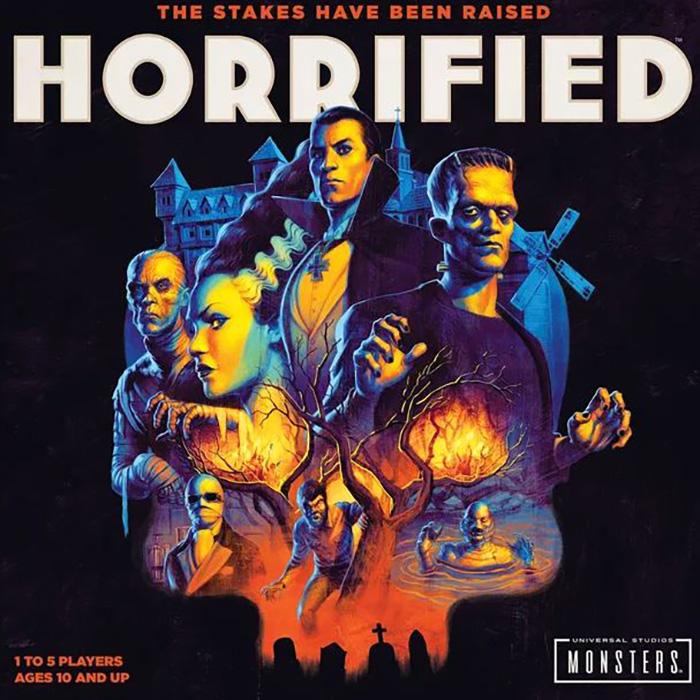 When you play Horrified, you feel like you’re stepping into a pair of old, comfy slippers. Icons like Dracula and the Mummy are so heavy that the game almost squeaks. But that doesn’t mean it doesn’t work hard. Horrified, on the other hand, backs up the nostalgia with great ideas that will keep you coming back for more, so you don’t get bored. Is that all? It’s one of the best cooperative board games on the market right now, and if you’re looking for Halloween board games, it’s a good one to look for as well.

Boogeymen from the old days come to a village every time, and you’re the only thing that stands in their way. If you want to stop this rampage, you’ll have to kill the monsters before they can eat any people in the area. This is not as easy as it sounds. Each villain has a weakness, and there’s a way to take advantage of it. For example, you’ll need to destroy all of Dracula’s coffins before you can stake him in the heart. Is there a way you can do this without leaving innocent people unprotected?

The chaos that ensues is a great memory. Horrified’s biggest strength is its love of the “trolley problem,” which is a situation where there isn’t always a right answer. There might be one person in the village who Dracula comes to feast on. Several more people have been cornered by a Creature from the Black Lagoon at the same time as the creature itself. Because you only have time to save one person, someone will die. What are you going to do? Because this game is played by two people, it has a unique advantage.