This April marks the tenth anniversary of the premiere of the HBO Original Game of Thrones. For eight seasons, fans ate up and learned about a story with a strong ensemble cast, epic battles, emotional turns, and shocking twists. It’s almost impossible to pick a favourite moment, but in honour of the Iron Anniversary, we asked fans to vote for the ones they’ll always remember. Here are the results, based on more than 34,000 votes:

Battle of the Bastards (Season 6, Episode 9) The fact that the battle that made the “Greatest Battles” list at No. 1 is at No. 10 here says a lot. Game of Thrones has never just been about bloody fights. Still, the fight between Jon Snow and Ramsay Bolton over the fate of Winterfell is the one we remember the most. It was a hard, dirty, and amazing episode that you should watch again and again.

Yes, Daenerys did say “Dracarys” before when her baby dragons set fire to Pyat Pree, but it was when she turned the tables on Kraznys, which led to the destruction of Astapor and the release of the Unsullied army, that we will always remember. No one word says so much about a Game of Thrones character. We’ve always known that Dany was made of fire and blood, but this was the moment when she really said it. 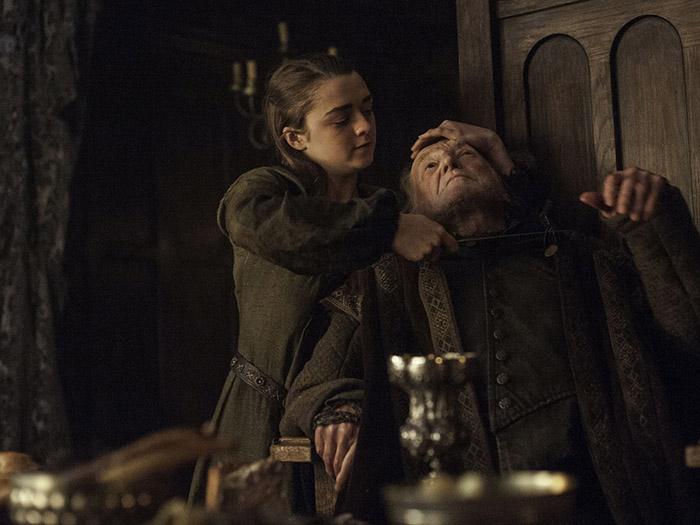 “As long as one wolf is still alive, the sheep will never be safe.” After seeing Arya kill Walder Frey at the end of Season 6, some viewers may have been surprised to see Walder toasting his men in the Riverlands at the beginning of Season 7. But this cold open was meant to make people confused for a moment. David Bradley’s performance as Arya as Walder is what makes this scene fun to watch again and again, but the scene itself gives us a sense of closure that we didn’t even know we needed. Winter came to House Frey, and it was scary.

The scene where Brienne of Tarth kneels before Jaime Lannister and is finally knighted is one of the most beautiful things in the whole series. It is also one of the most emotional and joyful parts of the story. In a movie with a lot of different actors, Gwendoline Christie’s character won our hearts with her bravery, loyalty, and ability to fight while still being kind. No one else was more deserving of the award.

From the way Ned Stark talked about his relationship to Jon to the rumours about Lyanna Stark and Rhaegar Targaryen from the start, there were a lot of clues about Jon Snow’s true family history. But a theory is just a theory until the show proves it, and the transition from the baby in Lyanna’s dying arms to Jon’s grown-up face sealed the deal. Jon finds out in Season 7, but the end of Season 6 was the moment we’d all been waiting for. The death of Ned Stark was the biggest game-changer of all. From then on, fans knew that Game of Thrones was willing to kill its favourite characters. In just nine episodes, Sean Bean gave a performance that will be remembered by every fan (and every character) for the rest of the show. Jon Arryn’s death before the premiere may have set everything in motion, but Ned Stark’s was the spark that changed the fate of Westeros for good.

Hodor’s simplicity won us over in a show full of complicated characters. It took a long time to set up, and when people finally found out what his one-word statement meant, it hurt and shook them to the core. When we talk about this scene, we can’t help but feel sad about the deaths of the Three-Eyed Raven, Leaf, and our beloved Summer. But the sound of young Wylis’s voice will stay with us forever. No, she didn’t. Cersei Lannister was never a woman to mess with, but in Season 6, when she burned down the Great Sept and everything inside it, she took it to a whole new level. The then-Queen Mother took out Queen Margaery, her brother Loras Tyrell, the High Sparrow, his followers, and everyone in between. What did she do? Smile and sip some wine. Every day’s work.

It might be an understatement to say that Arya Stark had been preparing for this for the past eight seasons. Back in Season 3, she might not have known that these were the “blue eyes” she’d closed for good, but as soon as Melisandre said it again, it all made sense. In the end, it’s not surprising that the kill that wasn’t even on her list made it to the second spot on this list. It was the end of the very first storyline fans saw in the pilot episode, so it makes sense that it would be here.

A Knight of the Seven Kingdoms

“A Knight of the Seven Kingdoms,” also known as “the last episode before some fans got really sick of Season 8,” was about the last hours before the Night King’s army of the dead attacked Winterfell. Each character had to deal with the fact that these could be their last moments alive. Arya decided to date Gendry, Tormund did his best to win over Brienne, and Tyrion chose to drink and listen to Bran the Broken’s long story. In the most exciting part of the chapter, Jaime knighted Brienne, giving her an honour she didn’t even know she wanted. This episode was a lot like “the calm before the storm.” It was done with style, humour, and heart. Ah, back to the beginning. For us viewers, at least. “Winter Is Coming” took us to Westeros, back when the dire wolves were all pups and the Stark kids were…well, they were all pups. Ned Stark, the stoic Warden of the North, agreed to help his old friend King Robert in the capital city so that he could look into the death of his childhood teacher in secret. All the while, across the sea, Daenerys Targaryen’s older brother, who thought he was the rightful ruler of the Seven Kingdoms, sold her to a barbarian. Even though “Winter Is Coming” gave us a lot of information, it’s amazing that it only gave us a small look into this wicked and wonderful world.