MMORPGs, which stand for “Massively Multiplayer Online Role-Playing Games,” combine the fun, camaraderie, and skills of multiplayer games with the fantasy and adventure of a story-rich single-player experience in a beautiful way. It’s easy to see why the genre is so popular.

iOS devices let you play a wide range of these kinds of games. We have put together a full list of the best iPhone and iPad MMORPGs. In Raid, an action-based RPG, you go to the fantasy world of Teleria. You have been brought back to life by the Mysterious Arbiter so you can fight the Dark Lord Siroth and his evil plans.

The game has single-player PvE Campaigns, massive online multiplayer tournaments, and arenas, but the single-player mode is better for skill development and features.

Raid is an MMORPG for mobile devices that looks and feels like a console game thanks to its beautiful 3D gameplay. Raid: Shadow Legends is one of the best MMOs you can play on an iPhone or iPad.

Step into the strange world of Star Wars and fight with some of its most famous heroes and villains. Whether you fight for the Light or Dark side, you can bring balance to the force or bring the galaxy to its knees.

Gather famous starships, build your war fleets, and fight epic battles in space. Make Guilds that you can change and work together to beat bosses like the Rancor and AAT Tank. One of the most popular first-person shooter games in the MMO category for iOS. Make a team and fight in epic matches against other teams to see who comes out on top.

Choose a class and a way to play that suits you, and then use Skill Points to level up your skills. With the helpful Spectator mode, you can also choose to be a silent observer.

The best things about the game are its growing community and many different ways to play.

The heroes and villains of the Marvel Universe get together to fight the Kree warlord Ultimus, who is from another dimension.

You can build the best team by getting people like Iron Man, Loki, Spider-Man, Captain America, and Doctor Strange to join you. Put them together in a smart way to make combo moves that make it easy to kill enemies. The game has amazing sharp details, smooth animations, and characters that look and move like they could be real people.

Humanity is under attack from a dangerous alien invader, and you are the last line of defence. You are a young Shadowgun recruit with powers and the potential to turn the tide.

This MMO has different multiplayer game modes and PvP arenas, as well as more than 600 different weapons, from plasma beams to good old-fashioned lead bullets.

The game’s community and social features are also important. Players can talk to other people, go to shops, take on missions, have a lot of fun, and get rewarded through a unique fame system.

What will you do? The infected are everywhere, and there aren’t many resources. Make friends with other survivors or fight with them… Many people aren’t as friendly as they used to be.

Build a safe place and help survivors to get more people and get stronger. Find out more about the zombie disease and be ready for the next attack by doing research on it.

In this MMORPG mobile game, there are special abilities that will help you a lot if you can find them. Winter is here. Live out your Game of Thrones dreams: win The Iron Throne by taking over the Seven Kingdoms.

Build your city, raise dragons, travel around Westeros, make powerful gear, and strengthen your army. In PvP events, the best way to beat your opponents is to use strategy.

Because of the clever way alliances work, you can also ask your friends to join you in battle as bannermen. One of the best iPhone games with a Game of Thrones theme.

In Rise of Kingdoms, it’s fun to build your empire and a challenge to defend it with all your power. You can choose one of 11 historical civilizations and make it a powerful force.

Battles happen in real time and are not calculated or planned ahead of time. Anyone can join the battle or leave it at any time, which makes things unpredictable and hard.

You can also ask dozens of famous people from history, like Julius Caesar, Sun Tzu, Joan of Arc, and Kusunoki Masashige, to be your commanders.

The Emperor has fallen, and now it’s up to you to run the kingdom. Find heroes from many different places and times, such as dwarves, mermaids, dark elves, and steampunk robots.

Gather your army, build your kingdom, plan your troop formations, and make a team of powerful heroes. Join a guild and make alliances. Then, ride together into battle and beat up different enemies.

You can also play online with millions of people all over the world. Beat them and take their throne so your kingdom can grow. 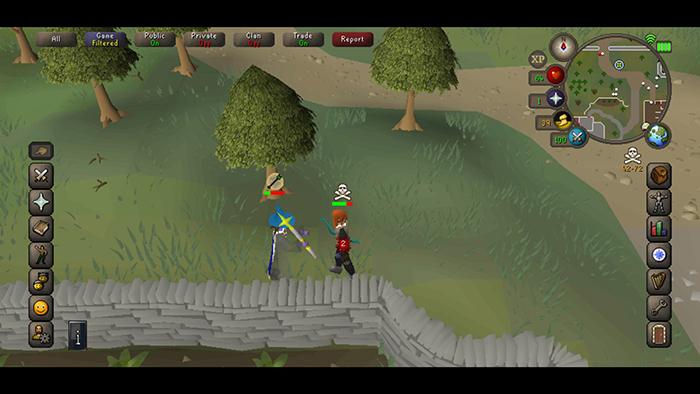 One of the biggest and most popular MMORPG mobile games in the world is Old School RuneScape. Fans vote on changes and updates to the game, which is a new and interesting way to take user feedback into account.

There are 23 skills to learn, hundreds of quests to complete, and dozens of raids and bosses to beat. It also lets you play on different platforms at the same time, so your iPhone and desktop clients will be in sync.

Look, I’m not going to argue with you. I know Genshin Impact isn’t “massively” multiplayer, but it still has a lot of things that the average MMORPG fan will like. There are daily quests, difficult dungeons, maps full of collectibles, gear to grind, and characters to unlock. If you like this type of story, you should check it out.