There are a lot of fun outdoor games that people are playing at family resorts, restaurants that have outdoor areas, and in their own yards. These games are fun for families to play together and keep the kids busy during playdates.

How old you are doesn’t matter. The games on this list can be played outside. If you have space, fill it with one or two of them. At birthday parties, outdoor barbecues with friends and every day, they’ll help people get to know each other better because they make them want to talk to each other more. If you play games outside, you might get some exercise and enjoy the sun, too. As seen on Shark Tank, Spikeball is played in backyards, on college campuses, and at tailgates. It is also played on the beach. People of all ages play spikeball, which is a little bit like volleyball. It’s fun for kids and teens, as well as adults. It’s up to each player to be as competitive as he or she wants. Even her PE class played this game outside at school because it’s great exercise and fun.

Two teams with two people each can play. People from one team throw a rubber ball on the net. The other team has three chances to get the ball back to the net. As I said, it’s a little like the volleyball moves “bump set spike.” There are a lot of yard games that you can take with you and store in a bag. This is one of them. You can also find Spikeball tournaments near you that are set up.

Cornhole is a game that people of all ages enjoy, even though it can be much more difficult than it looks at first glance. A lot of people like that. You’ll try to throw bean bags through a hole in a board that’s a little high. As a group, adults seem to enjoy it as much as kids do.

In addition to sets made of weather-resistant plastic, there are also boards with the names of your favourite college or football team. It is the best outdoor game for a party, and this one comes with a case so you can take it to the beach or the park this summer. You can play Kan Jam with friends at the beach or with your family in the yard. To play, you’ll make two teams of two people each. Tossing a Frisbee into a can from 17 feet away is what one player is trying to do. The other player is trying to stop it. If you hit the can, you’ll get points as well.

Ladder Toss is a favourite game at tailgates and on the beach because it’s easy to move and comes with a case. Players throw bolos at different-colored ladder rungs that they want to hit. The score is based on which and how many rungs you grab. If you want to play this game outside, you can call it ladder golf or bolo tos. Most people who grew up a long time ago played horseshoes with heavy, metal horseshoes that would scare parents today because of the risk of injury and damage to their homes. But with the new, rubber version, you can still play the classic, family-friendly game on the beach or on the lawn without the crazy 1970s-era risks.

You will put the rubber discs with stakes about 40 feet apart. Just throw the horseshoe on top of a pole, which isn’t as easy as it looks, but is still a lot of fun. Points will be given out for reaching different distances away from the stake, if the horseshoe falls against the pole, or if you score a “ringer.”

Outdoor ring toss games are usually small and easy to store. Children of all ages, but especially those who are toddlers to elementary school-aged, can benefit from playing outside with these toys. They help improve hand-eye coordination.

To make the game even more fun, buy the rings and cones together to make a full set. How do you play? It’s very easy! Make a cone or target out of cardboard squares or sidewalk chalk and throw the ring on it. When two people play a game, whoever has more rings on their goal wins. Beer pong is a game that is played with alcohol, but you don’t have to drink alcohol to play this bigger version (though you certainly can). Aim the ball into the buckets to get rid of the buckets for your team. The rules are the same: The buckets are strong, but if you fill them with sand or water, they won’t fall over. You can make your own rules for beer pong and play it on the beach or at a picnic in the park.

If you have a checkered mat, you can play both outdoor chess and outdoor checkers outside. You can bring your favourite board games with you to play outside. A lot of different mats are available, including nylon boards that roll up for storage.

It’s also possible to use interlocking plastic tiles that are raised above the ground to keep water from getting under the board.

A mat is first. Then you can buy the other parts. There are chess pieces of different heights, too. If you want to play chess outside, they have pieces that are almost 3 feet tall. 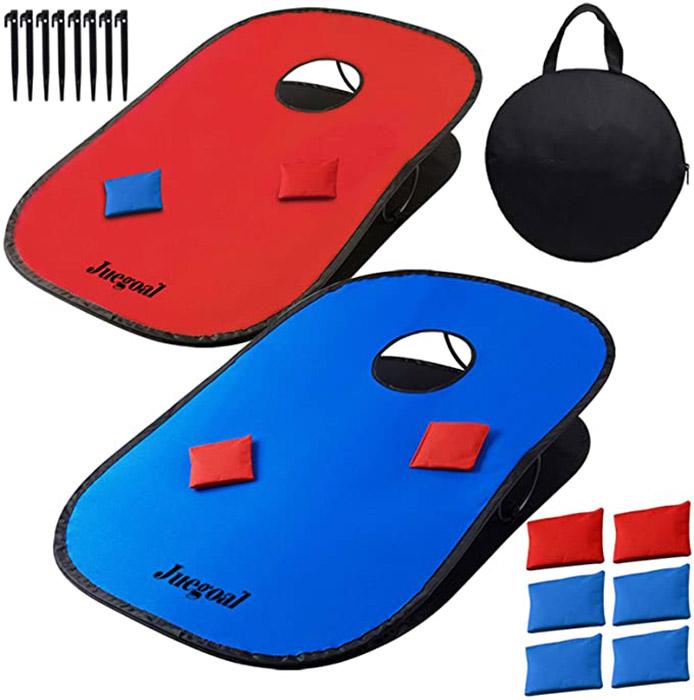 For a good reason, this dish is a favourite of everyone in the family. Game: It comes with two boards, eight bean bags, and a bag to carry it in. Players of all ages can easily figure out how to play it. You just throw the bags into the hole on the board. There is only one winner. If you have kids, you’ll love that this set is made of PVC and polyester fabric as opposed to wood, since it makes it easier to care for and easier to travel with.