Even though we enjoy anime, anime fanart makes us even happier! Here are some of our all-time favorite anime fanart pieces.

It’s possible to gain motivation and ideas from watching an anime. Dress up as your favorite character, take up their pastime, or just talk about the program with others who enjoyed it as much as you did. If you’re a lover of anime, you may be motivated to create some fan art instead.

Fanart photos are many on the internet, but a truly exceptional piece of work is one that manages to capture the essence of an anime program and its characters while also injecting some of the artist’s own style and personality. It’s always fascinating to see the unique perspectives that some of anime’s most talented artists take on some of the genre’s most well-known faces.

If you’re looking for the best anime fanart images, check out the gallery below. The crew of One Piece is depicted having a good time in this fantastic fanart. Arnistotle, the artist, adds his or her own personal touch to each character while preserving the unique characteristics that make them stand out. There is a more realistic but not less silly group shot as a result Fanart gives us complete creative control over our favorite characters, allowing them to do anything we want with them. Suzuran pays homage to anime, mechs, robots, and sci-fi with its stunning art style. The crew may not actually fit into that genre, but don’t they look fantastic in their spacesuits?

Grayscale drawings by Arasdel give a unique perspective on the crew. This One Piece fanart is awe-inspiring because of the artist’s ability to create depth and detail with just a few shades of gray. Luffy’s cap, with its pop of color, is the appropriate finishing touch.

Sailor Moon has received some creative fanart over the years, and not all fanart has to be in the same style as the original. Using AmeliaVidal’s artwork as a model, you can modernize a traditional piece of art. Sailor Moon’s essence and details are perfectly captured in this dynamic piece, which features sharp angles and a high degree of stylization.

Sailor Moon and her pals come to life in the paintings of artist K-Bose. The artwork is a mix of realism and abstraction. Aside from this particular drawing, there are plenty more to see in this collection.

This fanart of Sailor Moon is beyond words. It’s fantastic in every way. Loved series are remembered in the scrolling style image, which is a group picture held together by the forms and colors that draw the eye ever lower to the final image. To get the full effect, go on the link provided above and read the complete piece.

Here, the facial and ocular details are breathtaking. The artist is able to communicate such a high level of passion and emotion, as well as a hint of ferocity, with such a small piece of a face. If you’re looking for a specific reference, all it takes is a few simple clues to identify the character or show in question.

In just two panels, this fanart captures the action and emotion of the series with haunting color schemes and a rain-drenched battlefield. This photograph gives us a glimpse of Sasuke’s personality.

Fanart by Olggah – Click through to see uncropped image

Naruto’s life hasn’t been easy, and Olgahh’s portrayal of a younger Naruto perfectly conveys this. Even though he’s filthy and scruffy, you wouldn’t think this little boy would let life get to him… until you see those eyes. He depicted himself as a man with an inner power and wisdom that belied his young age in that painting. Sakimichan’s art is stunning, with bold black lines and silky smooth coloring throughout. Ichigo appears to be helpless in the face of some force beyond his control. The contrast and blending of the colors in this image make it a visual delight. In the world of fanart, even minor figures receive adoration. Shiro-chan shows off his skills in this amazing action shot. The outfit is captured in mid-motion, and the icy tendrils that surround it add even more energy to the picture. By painting Rukia and Byakuya in sepia, Keelerleah gives the Bleach characters a retro feel. The picture appears like it was taken on a snowy day, when the two were able to escape the madness of everyday life and enjoy the beauty of the snowy landscape.

With the help of Marmaladica, Mei-Rin transforms from the unflattering maid outfit and unflattering glasses that have long been a source of ridicule to something more presentable. We’re left scratching our heads over how we missed her before seeing this picture. With her wistful expression and beautiful, crisp lines, Mai-Rin has become an internet sensation.

Fanart of Shingeki no Kyojin (Attack on Titan) by Hifarry

Attack on Titan’s titular Titans are notoriously difficult to draw, necessitating extensive muscular and anatomical understanding. Aside from depicting the Titan accurately, this anime fanart also manages to convey a fantastic feeling of size (and danger).

This shot by Guweiz beautifully depicted San’s grit and will to succeed. Using a limited color pallet, San and her best friend are enchanting. Red and blur strengthen the hypnotizing eyes and lips, which are further accentuated by the employment of these colors.

Fanart of Pokemon by Arvalis

Arvalis’s depictions of Pokemon in real life are legendary, and you’ve probably seen at least a few of them already. Bulbasaur is just one of the artist’s incredible Pokemon reimaginings. This collection of photographs by Arvalis reveals the true nature of Pokemon like Bulbasaur and his evolutions. These images depict a creature that looks like a cross between a plant and a horned toad. In the real world, we’d be terrified to meet these creatures…! 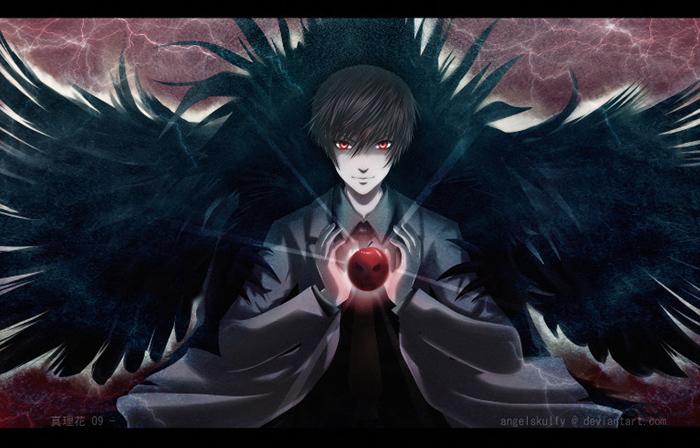 People who have the mental potential to cause harm to other people’s life have a certain type of mentality. As can be seen from this fanart, Light has a mentality like that. The character’s sociopathic tendencies are revealed by his level eyes and the rising darkness behind him. Fan art done well is all about symmetry and a well-chosen color palette. We all know that Death Note’s real protagonist is L, so it’s only natural that fanart depicting him would be plentiful. This wonderful photograph captures L in his element, relaxed in his favorite recliner with the one thing he can’t live without: chocolate. It is a simple background but excellent in framing the guy, in his normal slightly slanted manner of being.