Outside of the US, the Sega Genesis was called the Sega Mega Drive. It was one of the most important 16-bit consoles.

At the end of the day, the SNES won. But the Sega Genesis is still a great console with great games like Sonic the Hedgehog and Ecco the Dolphin.

The controllers were also some of the cutest I’ve ever seen.

If you have more than one, it would be wrong not to share the fun of retro gaming with a friend, family member, or anyone else who wants to play.

And here are some of the best 2P Sega Genesis games that you should try. 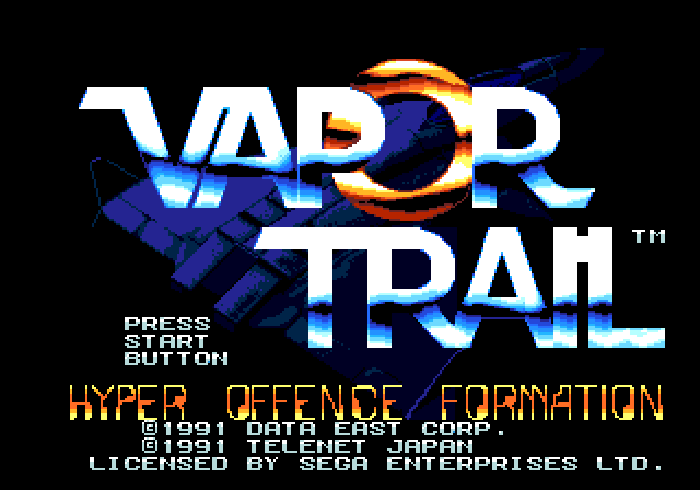 Vapor Trail is a shoot-em-up that takes place in the year 1999, when a terrorist group called Dagger has taken over New York and a number of nuclear missile silos.

Now, it’s up to you and the Player 2 you trust most to fly in and weaken their military so they can be stopped.

You can choose from three different types of jets and look forward to several weapon upgrades.

It’s not the best game. But it can definitely keep you busy for a while.

If you like shoot-em-up games like I do, but your friends aren’t quite as good as you, you might want to start them off with Air Buster.

This beautiful side-scrolling shoot-em-up puts you and a friend in Blaster Fighters and sends you into orbit. Your goal is to destroy a flying space fortress that threatens peace on Earth and free people from being enslaved.

Back in the day, many people and publications said the game was too easy.

But you can’t argue with the good graphics and sound design. Sometimes, a friendly face-off in a classic puzzle game can be just as fun as a fight or race.

Columns 3: Revenge of Columns combines the best parts of falling blocks and match-three games to make a unique game that is somewhere between Tetris and Candy Crush.

On the Sega Genesis, there were a lot of good fighting games.

But only a few are good enough to be on this list.

One of them is SNK’s Fatal Fury 2, which is known for introducing iconic characters like Mai Shiranui, who became a sex symbol and one of SNK’s most well-known mascot characters.

The Desperation Move, which does a lot of damage and can turn the tide of battle when your character has less than 25% health, is another interesting addition to the game that kept things interesting until the very end of each match.

Compared to the arcade cabinet, the sound effects could use a lot of work.

But it still has all of the characters, all of the stages, and a few extra customization options that aren’t in other versions. Bio-Hazard Battle is one of the most unusual shoot-em-ups when it comes to the story.

It takes place a long time after a new kind of deadly retrovirus came out. Most of the living things on the planet were turned into horrible monsters by this virus. The few people who were still alive had to flee into space and wait in cryostasis until the world was safe to live on again.

Now is the time for you and a friend to wake up and pilot organic ships down to the surface to make a new place for humans in this wild world full of dangerous creatures.

I fell in love with the game right away because of its detailed backgrounds, unique enemies, and bass-heavy music tracks.

It’s also pretty hard, and you can’t get to the last few levels unless you play on a hard setting.

Race games are fun to play.

What’s even more fun, though?

Games where you race against other people and try to beat them.

Street Racer is a unique game for the European Sega MegaDrive that combines the best parts of Mario Kart and Street Fighter.

It had funny, campy characters like Surf Sister and Frank Instein, who would risk their lives and limbs to win in different competitions.

Aside from racing, the game has Soccer Mode, which is like an old-school version of Rocket League, and Rumble Mode, where you have to push other drivers off a battle arena. But Road Rash 2 is the best vehicle battle game for the Sega Genesis.

This game has both racing and fighting with cars, so you can do both at the same time.

You’ll use baseball bats and metal chains, among other blunt weapons, to try to knock your opponents off their bikes while staying on your own until you reach the finish line.

If you win, you’ll get money that you can use to buy a better, faster bike.

You can also give your machine a little boost with Nitrous Oxide and maybe add some nails to your bat.

Just make sure that your P2 is not the type to seek revenge.

In the second game in the Sonic the Hedgehog series, co-op gameplay was added.

But it wasn’t until the third game in the series that the multiplayer part was fully developed.

In this platformer, one player controls the blue hedgehog and the other controls Tails, who is his friend.

You’ll use the unique skills of both characters together to reach new heights and move through the six Zones, which are each made up of two acts.

When you’re done with the story mode, you can switch to Competition Mode and race each other through five special stages that aren’t in the main campaign.

A player can also race as Knuckles the Echidna in addition to Sonic and Tails. Sonic 3 was a great addition to the Sonic games (especially for multiplayer).

The Adventures of Batman & Robin Batman probably isn’t the first thing that comes to mind when you think of multiplayer games, but this 2D action game is a lot of fun. It has a mix of long-range weapons and close-quarters combat, as well as some fun shoot-em-up segments for good measure. Oh, and it’s very hard, so you and a friend will definitely have to show what you’re made of.