Anime heroines armed with guns have a seductive allure. Regardless of whether they’re on the side of the good guys or the baddies, they’re a formidable force to be reckoned with.

The best, most badass anime heroines with firearms will be honored in this article. Saya appears to be completely uninterested in what’s going on around her at the moment. While she initially appears to be a young girl in need of protection, it soon becomes clear that she is far from it. She’s quick, nimble, and, of course, quite talented with any weapon or lux her father has designed, not just guns.

A lux handgun or a lux grenade launcher could be used. That’s why Saya came to Seidoukan Academy in the first place: to promote her father’s weapons.

In spite of this, her lack of interest in anything is the primary reason she’s ranked so low. Sinon, commonly known as Shino Asada in Gun Gale Online, is an excellent marksman. She’s a one-of-a-kind shooter who fully adheres to the “One Shot One Kill” motto. Sinon was still able to use her long-range combat powers with a bow and arrow, despite the fact that Alfheim Online did not allow the use of guns.

Sinon is always calm and collected, but when she’s talking to Kirito, she is easily perturbed. If you’ve seen the series, you know why. In her early years, Akane was an ill-informed, naive police officer whose own ideals of justice occasionally come in the way of solving crimes. Insightful and brilliant, she may be, yet she can also be excessively idealistic.

A criminal named Shogo Makishima, for example, slipped out of her grasp, resulting in the death of her companion at his hands. As a result of her inability to kill him and her desire to bring him in alive, she fails to retaliate against him once more and allows him to escape.

When you witness Akane’s character grow, it’s a joy to behold. In the course of working with Division 1, she begins to understand the detective’s way of thinking. At some point in the future, she develops an unyielding resolve to bring down the criminals she sees as a threat to society. 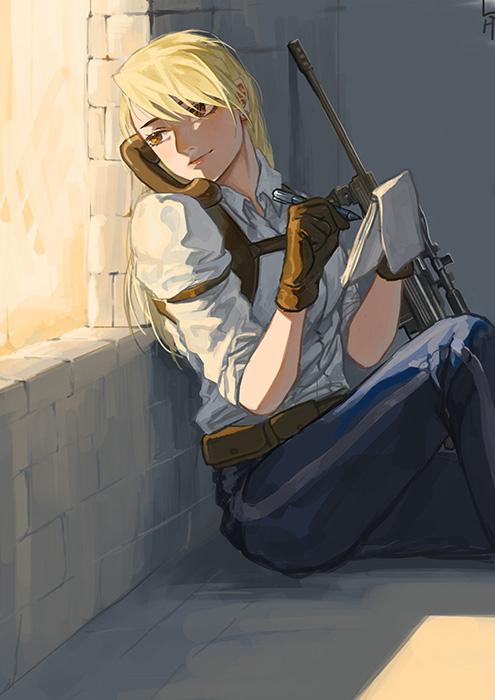 Riza Hawkeye is Colonel Roy Mustang’s most trusted and capable lieutenant. His personal bodyguard and most trusted lieutenant is a sniper and guns expert.

It’s hard to argue with Riza Hawkeye’s stiff, controlled appearance. However, she has a tender and sweet side to her as well. Even with Edward and Alphonse, and her Shiba Inu, Black Hayate, she is a warm and kind person.

Black Lagoon’s protagonist Rebecca Lee, known as “Revy,” isn’t the most likable character. Revy, a heavy smoker, drinker, and loudmouth, has no idea what diplomacy is. She relies on her marksmanship and other sorts of violence to obtain what she wants.

She’s abrasive, caustic, and a little racist in her tone of voice. ‘Beaners’ and ‘chinks’ are just some of the terms she uses to describe people without apologizing.

She’s one of anime’s most memorable female gunslingers, especially because she enjoys torturing and killing people to the point of maniacal joy.

For the sake of avoiding spoilers, we won’t tell you what caused ‘Two Hands’ Revy to turn out the way she does. As one of the best anime gunners, Pakunoda has earned her place on this list by virtue of her unwavering loyalty and a swaggering self-assurance that has earned her the esteem of her fellow members of the Phantom Troupe.

Aside from killing, her pistol can also be used to acquire information and the purest memories of her enemies. But she’s a bit of a filler, and *spoiler alert* she died way too early in the series to have much of an impact.

Homura Akemi is the lone exception to Mami Tomoe’s kindness as a seasoned magical girl. In addition to her ability to transform her ribbons into a gigantic pistol, she’s a talented gunfighter.

Because she can summon all of her weapons and they are based on rifles from the 1600s, she must be extremely accurate with them. The death of Mami’s parents in a vehicle accident left her with a strong desire to protect those she cares about. The anime’s title character, Canaan, is a stern and reserved young man. While the Bible refers to Canaan as a sacred land, its story is anything but. For the most part, Canaan is an excellent marksman with a handgun.

She’s a great companion to Maria Osawa, the protagonist of the show, who is on a mission to find the next great tale in China. ‘

Her transformation from cold-hearted mercenary to someone who is aware of the implications of her actions is what makes Canaan so compelling.

Siam gave her the codename “Canaan” after she was the last survivor of a war-torn hamlet, so you can see why she acts the way she does. To expect anything other than the best from an anime character with the moniker “Sherlock Holmes IV” is just plain wrong. Aria H. Kanzaki, however, is regarded as a disappointment in terms of her inability to make deductions.

Because of this, she became known as “Defective Holmes” in the literary community. Her life is turned upside down as she falls in love with her prodigy even though she can’t always communicate her feelings, despite all of that.

The list of Magical girls includes Homura Akemi. Modern guns and conventional weaponry compliment Homura’s magical shield, unlike Mami’s usage of magical weapons. While she is intelligent, Homura lacks the self-confidence to pursue her dreams.

However, this is not the case. She’s become accustomed to appearing cold and indifferent after enduring a lifetime of atrocities and pain. Intelligence Bureau in Romdeau assassin/investigator Re-l Mayer has a unique ability to see the future. Genetically, she has the most curiosity of any human creature, and her never-ending drive to fulfill it typically leads her into trouble.

In the beginning, Re-l appears aloof and indifferent, but owing to heartbreaking flashbacks about her upbringing, we have learned that her aloof personality is nothing but a product of the intensive emotional manipulation done to all Romdeau residents.

This list of the finest anime girls with weapons includes a teenage boy, so if you’re wondering why he made it, you didn’t pay attention to Kino’s Journey enough. Kino is still a female, despite the fact that the protagonist of this novel is an androgynous badass who rides around in a gorgeous Hermes.

While she’s a skilled markswoman, she’s also a global traveler on the prowl for sworn enemies, leaving everyone she meets in the dark about her true identity and disposition. It’s hard to overlook Triela, the Social Welfare Agency’s first-generation cyborg, when it comes to talking about androgynous gunslingers. Two seasons later, she eventually admitted that she dislikes the manly clothes her handler Hilshire chose for her because she believes they make her stand out.

Everyone knows that the cyborg’s story has a bleak ending, so spoiling it would be pointless, but boy, did she make the most of her brief window of opportunity. It’s safe to say that Yuri Nakamura appears like a normal schoolgirl, with her pink hair and yellow ribbon. The truth is that she isn’t your average high school student.

Her death is the first step. When it comes time for her to take on God for what happened to her and her friends, she is actually the creator and head of a rebel force known as the Afterlife BattleFront or ShindaSekaiSendsen She uses hand grenades, a retractable knife, and a Beretta 92 Pistol, among other weapons, to fight a genuine angel. YunoGasai from Mirai Nikki is one insane female gunner that I’ll never forget. Like Yuri Nakamura, you’d assume she’s a sweet girl with long, pink hair at first glance. But if you look away for even a second, you could end up dead, as this chick is a complete lunatic!

If it means saving Yuki, she’ll do whatever it takes, including annihilating everybody who stands in her path. The way she smiles like a crazy while firing a rifle is enough to put her at the top of this list.

That concludes our survey of the top anime gunslinger chicks. The 21-gun salute in celebration of these strong, powerful women is well deserved, regardless of whether you like or dislike them.