10 Best Psychopath Movies Ever Made

Who is a psychopath? The good old Wikipedia definition of psychopathy states it to be a personality disorder, exhibited by persistent antisocial behaviour with less or no empathy or remorse with bold and disinhibited characteristics. It’s usually believed that the psychopaths or psychos in short are lunatics and crazy people. But in reality, they understand human behaviour better than most people and that’s what makes them so dangerous. Filmmakers have had some what dangerous affinity towards these psychopaths and have churned out numerous movies about them. The following list picks up some of the most memorable psychopath portrayals in movies, where the characters have given us the creeps, the shrieks and the jitters. Most importantly, they made us believe that they are real.

I currently feel that the term ‘psychopath’ is incorrectly thrown around a lot these days, without understanding the correct pathology of it. The human mind is a hive of complex thoughts and mechanisms, and psychopathy, psychosis, dementia, dissociative identity disorder, among others, are only a few of the disorders it faces, that are often used under the umbrella ‘psychopath’ term. Similarly, serial killer movies are often termed psychopath movies, while it may not be true always. A psychopath can be extremely calm and blended with the environment for all you know, even proving to be harmless in some situations unless triggered otherwise. To sum it up, a psychopath’s primary differentiator is a plain lack of empathy for his actions, however gruesome they may be, mental or physical.

All of it falls under inherently grey areas with a lot of overlaps, but we have tried to (mostly) steer clear of psychological and medical connotations to bring you a list of top movies about psychopaths. On this list, you will find psychopath killer movies, psychopath horror and thriller films. You can watch several of these best psychopath movies on Netflix, Hulu, or Amazon Prime. ‘Seven Psychopaths’ was indeed a welcome break in this list of increasingly violent and disturbing psychopath films. I agree that the septet of oddballs might not be textbook psychopaths, and might even be toned down versions of a lot of psychopaths compared to other films on this list. However, that doesn’t for one second deter ‘Seven Psychopaths’ from being a damn good film based on them, and that it even brought a smile to my face along with an occasional chuckle or two at its sadistic, firebrand kind of dark humour, is completely to its merit.

The film boasts of bringing together a stellar ensemble cast including Colin Farrell, Sam Rockwell, Woody Harrelson, and Christopher Walken, all of whom, especially Rockwell, appear to be having a blast, and that adds a lot of levity to the plot and the outlandish violence that is often characteristic and accompanying of a dark comedy of this nature. The ludicrous plot of the film should be reason enough to invest your time in this, but if you have seen the rather excellent ‘In Bruges’ (2008) by the same director, Martin McDonagh, you will get it, and love it for what it is.

The only film on this list with a primary female psychopath holding the reins, ‘Basic Instinct’ is also Sharon Stone’s claim to international fame for playing the murderous femme fatale Catherine Tramell. The film is often remembered only for its famous interrogation scene that declared Sharon Stone as a symbol of sexuality the world over, her character’s more mental traits are often glanced over in favour of the physical ones. She is bold, confident, often apathetic to no cause, and cold and manipulative as ice (pun intended).

While we do not necessarily see her undergoing an overtly psychopathic violent outbreak in the film as many of the characters in this list do, it is her calm, calculating nature that really puts her there among the best movie psychopaths, albeit a strong and sultry one. The only thing that puts me off about her character is the one cliché that writers often employ for a female psychopathic character, and that is her inherent use of sex as an object of leverage. Apart from that, there is much to enjoy in this guilty pleasure of a film and Sharon Stone’s scene stealing act. Gordon Gekko is the kind of psychopath you most probably come in contact with in your daily life and have the most possible chance of encountering personally among all the ones listed here, although god help us if we encounter any. He is not the murderous, violent kind. Perhaps a nice dial back from the serial killer genre that the psychopath films find a fair overlap with, Gordon Gekko is a suave, successful Wall Street guy, whose innate psychopathic characteristics unveil themselves as the film progresses. He is shown consumed by greed accompanied with a lack of empathy and responsibility for the actions he takes in his pursuit to get it, which also consequentially reflects the capitalistic nature of the corporate world we live in. His “greed is good’ speech, while putting Michael Douglas’ great showmanship on display, is also something that immediately established his character as an antagonist.

Voted as one of the realest and most plausible depictions of a psychopath on film on multiple platforms, Gordon Gekko’s cunning, manipulative and even dangerously narcissistic act is a perfectly underplayed, uncanny ploy, and that’s what should give you the jitters.

Based on Stephen King‘s novel of the same name, it tells about a fan who abducts her favourite author for killing a character from the novel. Misery brought Kathy Bates an Oscar for her portrayal of a cunning and vicious Annie Wilkes. Her character is the text book description of a psychopath, perfectly sane and rational while torturing her captive. A wealthy Austrian family is taken hostage by their innocuous looking neighbours, at their country side holiday home. A sadistic game of cruelty starts with the bet that the captives will not be able to sustain by next morning. The movie is famous for its ‘breaking the fourth wall’ concept where the perpetrators keep talking to the audience. The film has one of the most unexpected endings, thus breaking all types of formulaic mode of storytelling.

That Daniel Day Lewis is among the greatest living actors today and his performance in ‘There Will be Blood’ was one of his absolute bests, is a statement now recorded enough times to be engraved on a plaque. Several critics have raved about the psychopathic nature of Daniel Plainview’s character, the numerous layers to his character that pierce through to the conniving man of commerce that he was, and how Day-Lewis has portrayed it to eerie, utmost perfection.

Everything he did to beat his rivals and to expand his business, including his calm, cold mannerisms and ruthless business tactics until his final implosion towards the end of the film, to him using his adopted sun HW to present a fake front to prospectors and his apathetic relationship with him, to his final confrontation with Eli whose head he mercilessly bashed in, everything ticks off essential pointers in the textbook of psychopaths for Plainview, who was also a highly functioning and intelligent one at that. 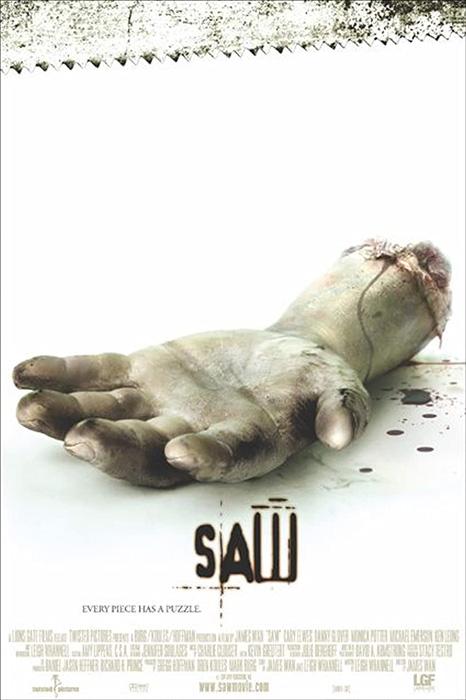 The first in the series of consecutive bad movies as it got made, ‘Saw’ was by far the best of them all. Two men awaken in a room, chained to their feet with two hacksaws and a corpse for company. The catch? One has to escape the room while the other has to kill him in exchange of his family. Flashbacks detail the backstory while the captives ponder looking at the hacksaw – to cut off the feet tied to the chain. It was a bizarre yet successful attempt by debutant director James Wan to mix slasher genre into horror, where the world of Freddy Krueger and Jason got a new entrant: Jigsaw.

The film ‘Bronson’ is based on the controversial life of Michael Peterson, better known as Charles Bronson, and infamously the most notorious prisoner in Britain. The film’s closing line states that Bronson has spent 34 years in prison (that was 2008), out of which 30 were in solitary confinement accounting for most of his adult life. What fetch him this notoriety, despite being sent to prison for only armed robbery, were his continuous violent run-ins with inmates and guards, and a bunch of kidnapping instances within the prison to his name.

The film is semi biographical in nature and has Tom Hardy playing the eponymous character with easing conviction, with added touches of humour and a very stylistic treatment at the hands of the director for a film this grim in nature, and because of that, I agree that ‘Bronson’ is one of the most fun films on this list to watch despite the subject matter being the life of a disturbingly violent and non-complacent prisoner. The film’s final scene showing Charles Bronson caged up in solitary confinement, beaten up and bloody, is the stuff of claustrophobic nightmares. He is today, a self-styled artist, regularly engaging in even writing with quite a few books to his credit. He even runs a charitable organisation to help the less fortunate with opportunities in art, and was also a bare knuckle fighter once, which is where he got the name ‘Charles Bronson’ from. If you look closely enough, you can spot the word controversy hidden in the title of this film. ‘Natural Born Killlers’ instantly run into trouble because of its plot of a murderous couple going on killing sprees that are violent, graphic and even gut churning in an instance or two, and their sensationalisation by the media owing to its obsession with crime as easily marketable material. The film therefore works as a satire, a crime fuelled saga, or even a romance with murder as backdrop, if you may, while benefiting strongly from arresting performances by Woody Harrelson and Juliette Lewis.

It all starts to make a whole lot of sense when you learn that the script and screenplay was written by the man Tarantino himself, and was toned down (!) by the director of this film, making me wonder what horrors the original script housed. Also infamous for inspiring a series of truly horrendous copy-cat crimes, ‘Natural Born Killers’ showcases two psychopaths turned serial killers in the truest sense, showing no signs of remorse, and it remains one of the most divisive films with respect to personal choice, yet one of the most definitive ones on the subject matter of psychopathy. Don’t miss it if you have the taste for it.

If it isn’t all in the name of the film, take this for a fact. ‘Henry’ and ‘The Cook, The Thief, His Wife and Her Lover’ were among the two movies responsible for having the MPAA revise its X rating to NC-17, implying non pornographic but adults only films. Even years after its release, it is unsurprisingly cited by many as the most realistic depiction, if not the best, of a real psychopath. That very notion is up for a debate every time it is discussed, yet ‘Henry’ unequivocally manages to numb every muscle and sense in the body, and knowing that the two main characters in the movie, the killers, are based on actual people sends shivers down my spine.

The film doesn’t provide any commentary on the nature of the killings, doesn’t encourage them or condemn them, doesn’t even attempt to deconstruct what lead Henry to commit those murders. It just shows them from the perspective of an omniscient non visible bystander, and you become that when watching the film. A mere bystander witness to the horrid happenings.

This is not a horror movie, but the scene of the video recording as Henry and Otis slaughter a hapless family is gut sickening and horrifying. To add to it, the murderous duo watch the tape later, and I don’t feel that the confining medicalisation of psychological terms can ever truly encompass what this behaviour can be classified as.