On October 9, 1967, at the age of thirty-nine, Ernesto “Che” Guevara was assassinated in Bolivia by the Bolivian military.

As a swashbuckling 20th-century Robin Hood and Sir Galahad, Che was the left’s answer to James Bond. As a fanatic and a murderer on the far right, he embodied everything that was wrong with the world today.

In the eyes of the world, he’s the handsome, youthful, cigar-smoking, beret-clad, bohemian-looking revolutionary.

Che’s image is plastered on T-shirts, posters, and tchochkes more frequently than that of any other advocate for the poor and oppressed at protests around the world.

Despite his status as a guerilla warrior, Che once said: “At the risk of seeming ridiculous, let me say that the true revolutionary is guided by great feelings of love.”

In addition to his charisma, Che suffered from asthma, which may have given him a deeper understanding of human suffering, but it had no effect on his speed. When he could have been sitting in an air-conditioned Havana bureaucracy, he kept going into the jungles.

Many films and documentaries have been inspired by Che’s life and work. Here is a list of the top ten films about Ernesto Che Guevara de la Serna, a fallen but never forgotten champion of the poor of the world. Films depicting the legendary anti-colonial hero Che Guevara were released less than one year after his death, and many of these films featured actors who were well-known at the time of the film’s release. Luis Bunuel’s leader, Francisco “Paco” Rabal, was first notable actor to wear army boots and play a guerrilla leader in a film.

Actor John Ireland (who appeared in Spartacus and the TV series Rawhide) co-starred in this 1968 Italian film. “El ‘Che’ Guevara,” directed by the Roman Paolo Heusch and written by Adriano Bolzoni, whose screen credits included spaghetti westerns “A Fistful of Dollars” and “The Mercenary”, co-written by Franco Solinas.

The 1968 film “El ‘Che'” is the first to depict Che Guevara’s failed Bolivian expedition, but it was made before the publication of his famed diary, so its accuracy is highly doubtful. (You can watch the entire movie in Spanish here.)

As soon as the Egyptian actor Omar Sharif (who co-starred in the 1962 desert warfare epic “Lawrence of Arabia”) was cast in the role of guerilla leader in an exploitation film targeted at teenagers in 1969, Hollywood was on board.

Bolshie biopics depicting renowned revolutionaries were common during this time period, and “Che!” was one of many such films, produced in part by ex-blacklisters and starring communist actors, to try to cash in on the student uprising at the box office. Another example is “The Assassination of Trotsky” (1972), directed by Joseph Losey and starring Richard Burton as the assassin.

The Fox Ranch (now Malibu State Creek Park) used as a stand-in for Bolivia in “Che!”

While Michael Wilson was working on the Blacklist he also wrote/co-wrote such classics as “Salt Of The Earth,” 1957’s “The Bridge On The River Kwai,” and “Lawrence,” among others.

Wilson once described this film as his worst career failure in “Blacklisted, The Film Lover’s Guide to the Hollywood Blacklist,” written by Paul Buhle and Dave Wagner. Sy Bartlett savaged a heartfelt screenplay in a cold-blooded act of cinematicide… However, the original screenplay is still in existence. “

“Comic-book treatment” and “one of the biggest film pranks of 1960s,” derided Leonard Maltin in his assessment. If you haven’t seen [cowboy star] Jack Palance as Fidel Castro, you haven’t truly lived.

However, Sharif manages to express Guevara’s audacity and fearlessness in the face of capture and death in his portrayal of him. No matter how many problems the video has, the radicalism of the martyred Che Guevara and the Soviet Union’s bureaucratic communist system are contrasted, and the film concludes with news clips of rallies inspired by the martyred hero. 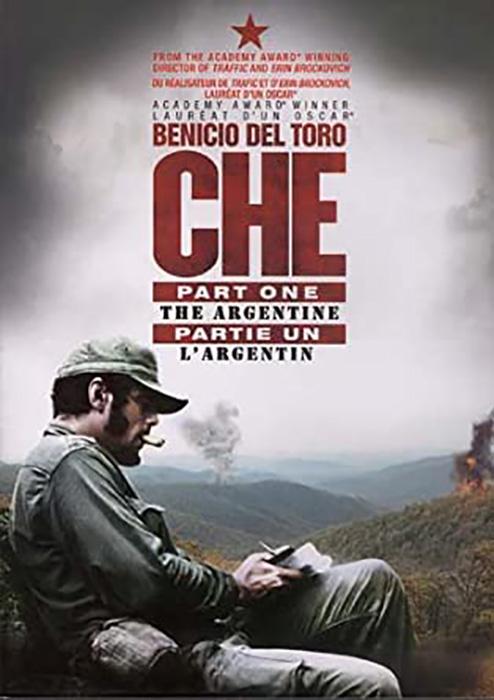 “Che: Part I: The Argentine” is the first film in the series, and it tells the story of Ernesto Guevara (Demian Bichir, nominated for an Oscar for 2011’s “A Better Life”) meeting an exiled Fidel Castro (Joaquin Phoenix) in Mexico and realizing they are both on the same side of history. After surviving the Granma’s tragic landing return in Cuba, the guerrillas set up camp in the Sierra Maestra and began to wage guerrilla warfare. During one of the film’s battle scenes, Che’s coughing almost gives away the rebels’ whereabouts.

As a comandante of the Revolution, Che Guevara proves his mettle in the battlefield.

Guerrillas sweep Cuba, and the film follows the “Barbudos” (bearded ones) as they come to power. If not stupidly, Soderbergh finishes the movie abruptly. Instead of replicating the classic newsreel footage of the revolutionaries gloriously entering Havana in victory, the jeep-riding Che quarrels with a fellow rebel whose vehicle is too bourgeois for their caravan for some odd reason. along route. There is some inspiration for “Part I” from Ernesto “Che” Guevara’s memoir, “Reminiscences of the Cuban Revolutionary War.” ‘The Lost City’ co-star Jsu Garcia, who portrayed Che in the 2005 film.

Aficionados of “El Che” will be devastated by the second half of Soderbergh’s Guevara biopic. It is with Guevara’s “Bolivian Diary” that Che shares authorship credit for “Part II,” which narrates the account of his quest for revolution in South America.

El Comandante wanted to use Bolivia as a center of operations from which he could spread revolution throughout Latin America because of its proximity to many other countries on the continent of his birth. It was ill-conceived as John Brown’s tragic 1859 raid on Harper’s Ferry in his drive to abolish slavery, but Che’s desire to “build, one, two, three, many Vietnams” across the Western Hemisphere was just as misguided.

By contrast, the official Bolivian Communist Party, which was pro-Moscow, turned its back on the Argentine and his allies, most of whom were native Cubans.

As Mao said, “the people are the sea, and the guerrillas are the fish,” Che’s ultimate effort was undone by a lack of local support. Guevara was captured on October 8th, 1967, by the Bolivian military, which had been armed and trained by the United States and the CIA. In order to avoid a dramatic trial and bring an end to Che’s “Tricontinetal plan,” he was executed on the next day.

Félix Rodrguez, a Cuban-American CIA official, witnessed the execution of Che Guevara, according to a June 3, 1975 declassified document. “Rodrguez proudly displayed Che’s Rolex watch to media after the execution.”

In order to verify his identity through fingerprints, Che’s hands were severed and interred in a secret location. Che’s ultimate resting place was discovered thirty years after his death, and his remains were unearthed and reinterred amid a public outpouring of grief.

“Ernesto Che Guevara, The Bolivian Diary,” directed by Richard Dindo in 1994, is a documentary on Che Guevara. As a counterweight to his fellow Argentine, Eva Perón, Spanish actor Antonio Banderas plays Che Guevara in this 1996 film adaptation of the musical by Andrew Lloyd Webber and Tim Rice (who produced the rock opera “Jesus Christ Superstar” together) (Madonna).

Even though Jonathan Pryce’s portrayal of General Juan Perón’s (Jonathan Pryce) wife Evita is a self-serving political huckster who takes advantage of her position to enrich herself, Guevara is shown as the genuine revolutionary with the best interests of the people at heart.

Parker, Rice, and Oliver Stone are all listed as co-writers on the credits page. As far back as 1986’s hard-hitting ‘Salvador,’ which Stone directed and co-wrote, his fascination in Latin America has been evident (receiving a Best Writing Oscar nomination).

Afterwards, he directed three films about Castro. This year’s “South of the Border” featured interviews with Venezuelan President Hugo Chavez and Bolivian President Evo Morales, who appear to have benefited from Guevara’s armed attempt to foment revolution throughout South America.

In January 2002, Showtime aired a 200-minute miniseries about Fidel Castro’s rise to power in two parts. July 26, the Sierra Maestra guerrilla war, the Bay of Pigs, the Cuban Missile Crisis, Che’s final mission in Bolivia, and more are covered in this informative and entertaining docudrama-like presentation. Stephen Tolkin, who wrote the script for “Captain America” in 1990, was an ironic choice as a teleplay writer. Gael Garcia Bernal reprises his role as Che, but this time he is a much younger medical student of middle-class roots who embarks on a motorcycle trip around South America before he became an anti-communist freedom warrior in Cuba in this 2004 blockbuster executive produced by Robert Redford.

Guevara kept a journal that became known as “The Motorcycle Diaries,” a sort of Latin American counterpart to Jack Kerouac’s On the Road. Walter Salles’ adaptation of the film is based on this notebook.

Granado (a distant Che relative played by Rodrigo De la Serna in the film) and Granado chop-chop across the jungles of South America in the diaries. They reached political maturity as direct witnesses to the hardships of the campesinos. Stunning scenery and a Neo-Realist utilization of indigenous people can be found at destinations like Machu Picchu.

Ernesto, who aspires to be a doctor so that he can help those in need, is a thoughtful, sincere, and sensitive young man. In a so-called leper colony on the Amazon, the medical student’s experience is transcendental. Che, a Christ-like character, refuses to wear latex gloves and befriends Hansen’s disease patients.

When Che celebrates his birthday, he swims over the river of deadly monsters that separates those who have and those who don’t, a metaphorical division between the First and Third Worlds. Che decides to side with the downtrodden and joins the ranks of the destitute. They are pleased by his act of solidarity, amazed by his compassion and daring, a perfect metaphor for who Che became. On the other hand, the best thing about Guevara is that he was a guerrilla fighter before he became known as “the heroic guerilla.

Filmmaker Juan Carlos Desanzo, who was born and raised in Buenos Aires, created this Argentinian biopic of Che Guevara, which derives its name from one of Guevara’s most famous phrases. On October 9, 1997, the exact thirty-fifth anniversary of Che’s death, Alfredo Vasco portrayed his fellow Argentine Ernesto in this 100-minute feature film, which was presumably shot in Cuba. Ernesto is the topic of a factual documentary from the History Channel that delves into the nitty-gritty of his turbulent life. Guevara biographer Jon Lee Anderson, Peter Kornbluh (who recently uncovered Henry Kissinger’s claimed plan to attack Cuba during the 1970s), Nikita Khrushchev’s son Sergei, Che’s contemporaries, and others appear in Maria Berry’s 90-minute documentary from 2007. Filmmaker Michael Anderson describes Che’s efforts to spread revolution as an attempt to trigger “World War III.” Reenactments and amazing newsreel footage are used in the video, which shows the rebels’ triumphant march into Havana, where they are greeted by cheering crowds.

The 2003 sci-fi noir short film by Irish director Anthony Byrne (at least since the 1969 Omar Sharif picture!) is the most unusual film to have Che as a character. During his voyage from the United Nations to Algiers in 1964, Guevara’s Cubana plane made an unscheduled stop in Dublin to refuel. As reported by a news report, severe weather forced Che’s plane to land in Ireland, the ancestral home of members of Che’s lineage. A possible allusion to the 1962 Cuban Missile Crisis might be found in Byrne’s mysterious short story, which draws inspiration from H.G. Wells (who, by the way, was a socialist). Che is played by Karl Shiels from “Batman Begins”(2005), and the Man from Maybury Hill is played by John Hurt from “1984”.