There are a lot of anime memes out there that even the most hardened geek can’t resist laughing at.

It used to be difficult to be an otaku. Anyone who dared to admit to watching or reading “those crazy Japanese cartoons” was laughed at and shunned by the rest of society. Those perspectives have shifted with time. Even if there are still others who disagree, the anime community’s voice is now heard more clearly.

The most obvious sign of this shift in attitudes is the proliferation of A-grade memes among the anime community. In the fanbase, you’ll find everything from the witty to the heartfelt. We’ve rounded up ten of the most popular anime memes for you, otaku! 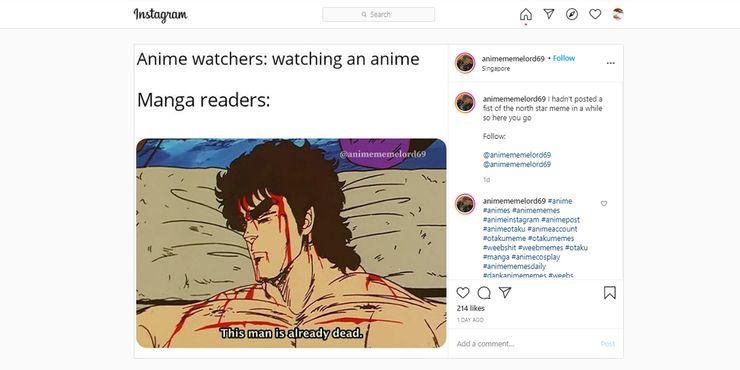 Many anime are based on manga, and it’s not a secret that most of them are. In order to keep costs down, only some of the manga is converted into an anime (usually beginning from chapter 1).

It’s not uncommon for the final chapters to go unanimated. Manga readers have an advantage over anime fans because of this. As a nod to the ongoing rivalry between manga readers and anime-only viewers, this meme implies that manga readers already know what the anime will be about.

There is nothing worse than having to sit and wait for your favorite show to buffer. When buffering takes longer than the actual 20-minute anime show, it’s beyond annoying.

Of course, bad internet speed or inconsistent Wi-Fi connections are to blame for this. An image from the popular anime Death Note is used in this meme (where Light and L are constantly playing a game of chase with each other) Some people in the anime community make fun of how many of their peers are introverts who don’t like interacting with others.

An anime binge-watching spree is more their style.

If they don’t already have a fierce argument over who the best waifu is, their only friends are other anime fans. This is a great example of how memes can be used for self-deprecating humor.

“Waifu” jokes are commonplace in the anime world (and sadly, not as many husbando jokes). Japanese pronunciation of English term “wife” has traditionally been used to represent a fan’s ideal anime woman, aka the character they’d like to marry. Waifu means “wife” in Japanese.

Huge waifu conflicts have erupted in the anime community throughout the years. When it comes to their waifus, otakus can be as emotionally connected as they can be to other people. It’s just part of the fun to be so enthusiastic. Since even non-otakus are well-acquainted with how chips businesses orchestrated the “snacks in a bag of air” movement around the world, this one is a universal meme.

However, it goes to show that the bags of chips purchased from a store contain a lot more air than chips in them as time goes on.

This is a very brilliant meme. Those who are familiar with KonoSuba will recognize this image and its context. Who knows what Aqua is supposed to be? She’s supposed to be powerful but she’s practically worthless when it comes to the important stuff. Nothing in this meme is meant to disparage Kevin Hart, who is a decent actor. Anime and manga adaptations adapted for Netflix tend to be vastly different from their source material. So far, these discrepancies have worsened, with Netflix’s adaptation of Death Note being the best example of this.

In other words, they scrapped everything that made the anime great in favor of mediocrity. Hardcore otakus were thought by Netflix to have no problem with those changes. They had no idea what was coming.

Characters in anime are undeniably lovely, especially when depicted in such a vibrant and cheerful manner. There is a noticeable difference when compared to real people’s faces.

To poke fun at anime fans who frequently utilize anime character images as their profile pictures, this meme has been created. At the very least, it serves to draw attention to the individual’s love of anime, which could lead to more opportunities to meet other fans. Not just for anime enthusiasts, since Japan is well-known (or infamous, depending on your perspective) for making things cute or “kawaii.” in Japanese.

There are at least a dozen vibrant colors to choose from when it comes to Japan’s toilet seats, school classrooms, and public transportation. Anime enthusiasts, on the other hand, have developed an aversion to everything that isn’t cartoonishly adorable.

A common practice on anime meme pages is to post screenshots from obscure shows and movies without identifying the source of the gif or image.

This explains why many meme comment areas are dominated with the question “Sauce?” In human language, this means “Where did this image come from?”