From Asta and Yuno to the Vermillions, Licht, Yami, and others, discover the most powerful main characters in the popular anime series Black Clover.

In the mega-popular anime series Black Clover, magic is the source of the character’s power. Depending on which grimoire a character possesses, they will be granted special magical powers and unique abilities that give them a leg up on their competition. While the antagonists of the Dark Triad and the Spade Kingdom possess omnipotent superpowers, they often pale in comparison to Asta and some of the main characters fighting on behalf of theClover Kingdom.

Whether it’s Asta, Yuno, Noelle, Julius, the Vermillions family, or some of the others, the most formidable main characters in Black Clover have impressive skillsets that are not to be trifled with. As Asta’s most trusted foster brother and protective sidekick on the popular demon-slaying anime, Yuno makes up for Asta’s lack of magical power through his unique abilities. Thanks to his four-leaf grimoire and half-elf possession, Yuno can wield Wind Magic, Creation Magic, Spirit Magic, Star Magic which enables him to manipulate the cosmos, create deadly objects out of thin air, and more.

Yuno bolsters his power by using Spirit Magic to summon Sylph, a wind spirit that can help him fight battles. When channeling 100 percent of Sylph’s energy, Yuno obtains enough mana to reach Saint-Stage, the highest form of devil-abolishing magic.

As a Royal Member of House Silva, Noelle Silva is one of the most formidable main characters due to her immensely powerful Water Magic, which she can use to create and control real water, launch deadly water balls at her foes, and conjure giant lethal aqueous entities in a flash.

What’s more, Noelle significantly increases her overall prowess once she is possessed by Undine, the almighty water spirit. When Noelle harnesses Undine’s power, she becomes a Saint-Stage mage strong enough to defeat most elves with extremely potent offensive curses. Also bolstered by the immense power of the Water spirit Undine, Lolopechka reigns supreme as the Princess of the Heart Kingdom. She slightly bests Noelle due to the healing powers she possesses in conjunction with Water Magic, Spirit Magic, and most impressive, Dark Water Magic. As a princess and priestess, Lolopechka can access all of the knowledge and abilities of her predecessors.

Lolopechka also controls all of the mana in the Heart Kingdom and becomes even more powerful when Megicula alters her curse and grants her the extremely awesome offensive powers that come with her Dark Water Magic upgrade.

Due to his royal nature as the first son of Clover Kingdom’s House Vermillion, Fuegolion comes from a supremely powerful bloodline of main characters on the beloved demon anime series. The almighty captain of the Crimson Squad is a master of Fire Magic, which he can manipulate and conjure incendiary objects to fight with.

With supreme strength, strategy, and skills, Fuegoleon was able to defeat such formidable foes as Rades Spirito, Elf, and the Apostle of Sephirah fairly easily in one-on-one battles. Fuegoleon can also increase his overall power by summoning Salamander, the fire spirit. The unmistakable first captain of the Black Bull squad in the Clover Kingdom, Yami Sukehiro is one of the strongest main characters on the stellar horror anime series. He uses a rare form of Dark Magic that bends darkness and absorbs Light Magic, which is so immense that can affect other worlds. As a result, Yami has been deemed an Arcane-Stage mage.

In addition to having the almighty skills to create black holes, Yami’s reinforcement magic is so severe that he can withstand the sinister Devil Dante’s Gravity Magic spells. Moreover, Yami possesses natural Ki, a sixth sense that allows him to respond before his opponents.

Fuegoleon’s older sister, Mereoleona Vermillion, is one of the strongest female characters in any animated TV show. The eldest daughter of the Vermillion royal house and one-time Crimson Squad leader, Mereleona has all the magical skills of her brother and then some.

The talented Fire magician can convert licks of flames into a gigantic lion’s claw that she uses to rip foes apart. If that move fails, Mereoleona will simply outmuscle her adversaries with her combat expertise, ability to build a lava-based forcefield around herself during assaults, and greater strength, speed, and endurance. Hailed as the strongest human in the Clover Kingdom, Mereoleona is even strong enough to pierce Asta’s Demon-Slaying Sword. As the Magic Emperor of the Clover Kingdom, Julius Novachrono is a challenging main character to overcome. Julius not only commands every squad in the preservation of the kingdom, but he also wields a rare sort of Time Magic that offers him a great edge. Playing God, Julius can speed, slow, stop, and even reverse temporality.

Julius also possesses Transformation Magic, which allows him to morph into whatever person he wishes, which offers him a significant edge in fooling adversaries. With incredible speed to boot, which allowed him to outrace Patolli, Julius earns his title as Emperor.

Before converting himself into a demon following the Elf Tribe Massacre, Licht was a good-hearted main character with outstanding talents and supernatural abilities. He takes much of his strength from Sword Magic, which creates the unequaled Demon-Slayer Sword, Demon-Dweller Sword, and Demon-Destroyer Sword, three of the mightiest weapons in the show.

Licht can also employ Union Magic to merge his Sword Magic with other forms, so strengthening his overall prowess. Licht can also wield Forbidden Magic, which allows him to pull energy from the abyss. 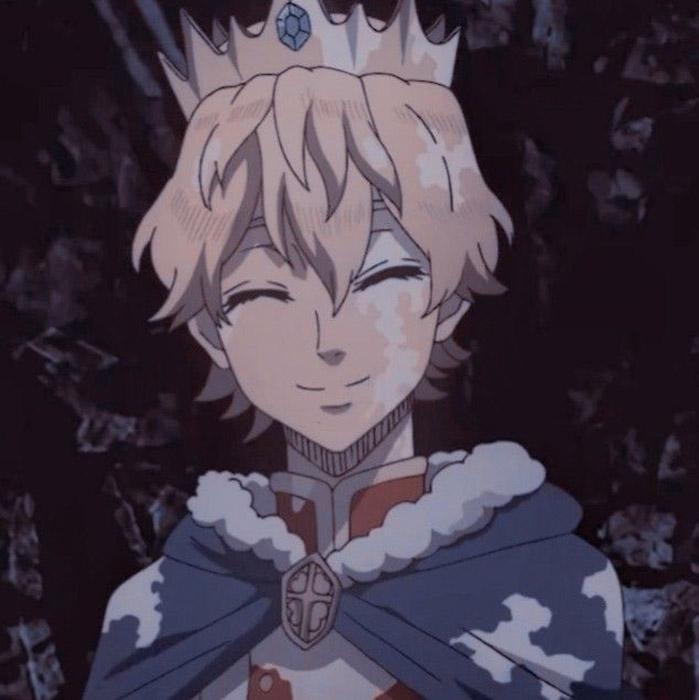 As the first Magic Emperor of Clover Kingdom’s Magic Knights Squad, Lemiel Silvamillion Clover is the most powerful main character other than Asta. With his distinctive Light Magic, Lemiel can perform spells strong enough to dispel curses placed by Licht’s demon form. He can also conjure weapons made of light and produces arrows of light on which he may go a considerable distance.

When harnessing all of his magical talents at once, Lemiel was able to overcome the almighty devil Zagred, proving his dominance as a human royal with more inherent mana than anyone in his realm.

As the primary protagonist on the show and future Emperor of the Clover Kingdom, Asta is easily the most powerful character on the program. Defined by his Anti-Magic skills which enable him to neutralize every single other character’s supernatural attacks, Asta is a particularly brilliant fighter who will outwit and conquer his opponents by speed, swordsmanship, cunning, intellect, and his sixth-sense Ki.

Moreover, when Asta is in devil form under the dominion of Liebe, he has access to an almighty 5-leaf grimoire that allows him to counteract Gravity Singularity and add additional weapons to his armory. Best of all, Asta’s four Anti-Magic swords, including Yami’s Demon-Slasher Katana, are the most powerful weapons in Black Clover.