The Jackbox Party Packs are a collection of funny party and trivia games that seemed to appear out of nowhere in 2014. They offer a lot of fun and funny multiplayer games. Yet, You Don’t Know Jack, the first wacky trivia game made by Jackbox Games, has been around on PC since the early 1990s.

With the release of 6 Jackbox Party Pack bundles for PC, consoles, and even streaming devices, the studio has built on the creative and appealing formula of You Don’t Know Jack and made a lot of fun and funny party games.

There are simple trivia games, bomb-defusing games, and funny T-shirt drawing games among these. The ability to use a mobile device as a controller adds to the fun and makes the games quick, easy, and fun for anyone to play. 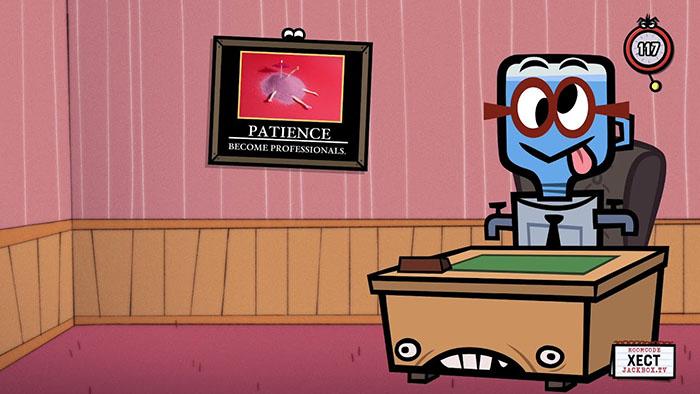 This dry-sounding theme, which is based on a stuffy office job interview, hides some really funny party games. Random icebreaker questions are given to the players, and they can answer them in any way they want. What follows is a sort of zany take on the “Mab Libs” concept, as players are thrown a hodgepodge of already-used words to cobble together funny answers.

Then, points are given out based on which answers people liked best and who owned the words being used. It’s not quite as funny as the fan-favorite “Quiplash,” but “Job Job” is still a good way to have a few laughs as a kid.

This is a creative, off-kilter trivia game where the player collects slices that represent him or her during tense spins of a wheel. Players have to answer questions that often have more than one answer or a number as an answer. They may also have to match up choices or write answers on a mobile device. This opens the door to more game-changing things than just how the wheel spins.

Minigames can be played to get points in very different ways, and if a player gets to 20,000 points, the “Winner Wheel” could end the game. This interesting take on the wheel-spinning trivia game will keep players on their toes because it is chaotic and throws curve balls. “Split the Room” is an underrated and somewhat taboo scenario game that requires players to be creative, sneaky, and generally aware of how their opponents think. To start, each player is given a weird scenario with a blank spot that needs to be filled in with an answer.

An example asks if a player would “steal the idea for a common cold cure that a child came up with and be the only adult who knows about it” (the bold being the filled-in answer). The goal is to come up with situations that are hard to decide on. Players earn points when they “split the room” and have different players make different decisions.

This game from the Jackbox Party Pack 2 is a good choice for people who want an easy-going game and some quick laughs.

In the audio-based game Earwax, players will be asked to choose the sound that best sums up a certain topic from a list of funny, cartoony sounds. The Judge will give votes to the people who can make the funniest or most creative sounds. It’s a great way to get in touch with your inner child, with all the animal and body noises it makes. This romp from the Jackbox Party Pack 2 is a good choice for people who want a game that is easy to play and will make them laugh quickly.

In the audio-based game Earwax, players will have to choose from a series of funny, cartoony sounds that sum up a certain subject. Whoever can make the funniest or most creative sounds will get votes from the Judge. It’s a great way to bring out your inner child, with all the animal and body noises.

This new Jackbox game is kind of like a simpler, backwards version of the popular trivia game “Taboo.” But instead of having to think of their own words to describe a prompt, players will have to choose from a small list of words that will be put into a sentence that has already been made.

This can make for some fun and intense games, since players will be on the clock and have to use clues and descriptions that aren’t always the best. It might seem hard, but people in the audience will have as many chances as they want to come up with answers. This one is a great way for improv actors and freestyle rappers to practise, and it’s also funny. Mad Verse City is based on Mad Libs, but it is even crazier because players have to make up rhymes on the spot, which are then read by robots in a hilarious way.

It’s a hit that you should check out because of the funny visuals and the way the monotone voice says funny, risqué rap lines.

Bracketeering is what you’d get if you took the structure of a college basketball tournament and mixed it with a bunch of crazy prompts.

In an elimination-style competition, players must put their answers to the test against those of other players. Those who come up with the best, funniest, or most creative ideas will get to fight another day. The game also throws some funny curveballs by switching the questions and matching them with different answers, which usually makes people laugh. The fact that up to 16 people can take part in this epic battle is really cool. This funny minigame is a clever take on telling jokes. It feels like a training simulator for amateur stand-up comics.

The player is an up-and-coming comedian who is going to work on a shabby cruise ship. The kicker is that players will come up with a few funny words and phrases that their teammates will use. Then, players use the words and phrases given by other players to make their own jokes quickly. It’s a game that will make you laugh and show off your sense of humour (or lack thereof).

There are five casual games to play in the original party pack. Fibbage is an old favourite. To play, you have to make up convincing lies to trick other people. Drawful lets anyone see how good they are at drawing. Both games are fun and will always be a hit.

The biggest problem with this first pack is that there’s not enough variety. You Don’t Know Jack and Lie Swatter are two different kinds of trivia games. Both Drawful and Fibbage are the same. The last game, Word Spud, might not be much fun at a party. Even though the games in this pack can be a lot of fun, you can find a wider range of games elsewhere.