It’s officially the Christmas season, which means it’s time to break out the Christmas music and DVDs. As a youngster or young adult, it’s good to see yourself on the big screen, especially if you’re a minority.

Although there are many Christmas films to choose from (Hallmark releases a new batch each year), few of them feature black protagonists (or even leads of varying racial identities or sexualities). Seeing only one thing over and over again can become tedious and confining. In order to compile this list, I focused on holiday films with black performers in the lead roles. My selections include classics like The Preacher’s Wife and Friday After Next as well as lesser-known gems like the Marry Me For Christmas movies and The Mistle-Tones series. The Whitfield family reunites for the holidays in This Christmas. It’s not all merrymaking and goodwill this time of year, as some family secrets are unearthed. The holiday season will be even more taxed as a result of this. Loretta Devine, Idris Elba, Regina King, and Chris Brown are among the stars of this year’s Christmas special.

This year’s Christmas has a nice mix of the two: some serious stuff and a lot of silly stuff. While no family is flawless, it’s good to embrace the imperfections and enjoy the messiness of your family together, especially during the happiest time of year.

A family grieves the loss of their matriarch, but the holidays bring them closer together in the film Almost Christmas. The family patriarch has had enough of the squabbling and demands that they all get along. Danny Glover, JB Smoove and Mo’Nique are among the cast members of Almost Christmas, which also stars Danny Glover and Gabrielle Union.

Mo’Nique and JB Smoove, two of the most well-known comedians in the business, are enough to make you laugh out loud in Almost Christmas. The over-the-top events and the comics’ inherent comedic ability elevate the material’s amusing value. Almost Christmas also includes some touching scenes that assist to paint a complete picture of a family’s holiday season.

The Preacher’s Wife features Denzel Washington, Whitney Houston, and Courtney B. Vance. In 1947, there was a film called The Bishop’s Wife, which was based on a book of the same name. Dudley, a character played by Denzel Washington, is an angel. To help a priest and his wife reignite their romance, he is dispatched to Earth. Dudley’s plans go awry when he falls in love with the preacher’s wife.

Any film that has Whitney Houston’s music is a must-see in my book. Also, Denzel Washington in a lighter part is a treat these days in The Preacher’s Wife. Featuring the talents of Washington and Houston and Courtney B. Vance in a light-hearted Christmas tale. A woman learns she has only weeks to live in the movie “Last Holiday,” starring Queen Latifah and LL Cool J. As soon as Georgia (Queen Latifah) learns she’s terminally ill and that she’ll die soon, she intends to live her life to the fullest, and that includes dating a coworker named Sean (LL Cool J).

Most I’m going to die, let me start living now movies don’t have revolutionary plots, but Last Holiday is one of those light and fluffy movies that reminds us of the value of having fun in life. The tone and themes of Last Holiday are very much in line with the idea of cherishing every moment and giving love whenever possible, despite the fact that it isn’t overtly Christmassy.

All of the major characters return to their positions to deal with a new set of problems inside their close-knit group of friends. A reunion after 14 years of friendship has finally happened for these pals. It’s hard to say whether something has the same chemistry and vibe as things from the past. Taye Diggs, Sanaa Lathan, Nia Long, Morris Chestnut, and Regina Hall star in Best Man Holiday.

Those who enjoyed the first film will be pleased to know that this sequel continues the story of these friends, and those who haven’t seen it should also appreciate it because it serves as a reminder of the importance of friendship, especially when those friends become family.

The Friday trilogy continues with Friday After Next. Like in Next Friday, Ice Cube and Mike Epps return to appear in this film. In this film, John Witherspoon also makes a reappearance. Day-Day and Craig are robbed by a bogus Santa Claus. On Christmas Eve, he steals some presents and rents a room in a hotel. Day-Day and Craig now have to come up with creative ways to recoup the money they lost.

If you’re a fan of Friday-style comedy, you’ll enjoy this film. Same ridiculous comedy with a Christmas-themed flavor. There’s also Katt Williams, who’s always good for a laugh. With Friday After Next, your holiday season will be a whole lot more absurd.

7. Marry Me For Christmas Series Marry Us For Christmas, A Baby for Christmas, Merry Christmas, Baby, and Chandler Christmas Getaway are all sequels to the original film. This collection of films has a lot to offer if you’re interested in Marci, her love life, or her family. Additionally, many of these films can be rented or streamed for a fee.

Christmas Everlasting, starring Tatyana Ali and Dondre T. Whitfield, was produced by Hallmark. Dennis Haysbert and Patti LaBelle also appear in the film. In true Hallmark style, a woman returns from the big city to her little town for the Christmas holidays. When she spends time with a lovely guy and spends time at home with her family, the Christmas spirit she had lost returns.

Hallmark movies are known for their cheesiness, whimsy, and messages of love and optimism, so you know what to expect coming into this one. Ali and Whitfield’s characters will once again enjoy Christmas if that’s your thing. Patti LaBelle and Dennis Haysbert star in this one, too, so it’s a lot of fun.

9. My One Christmas Wish

UP TV presented My One Christmas Wish. based on the true story of a woman who used Craigslist to find a family to celebrate the holiday season with, When Jackie (Amber Riley) was a child, her life was full of hardships. In spite of the fact that she’s since turned her life around, the loneliness of being an orphan continues to haunt her, particularly during the holidays.

Resilience, generosity from strangers, and joy in unexpected places are all themes in my One Christmas Wish. One of those warm and fuzzy Christmas movies that helps you appreciate your loved ones and see the world in a different light, which is something many people need use this year in particular. 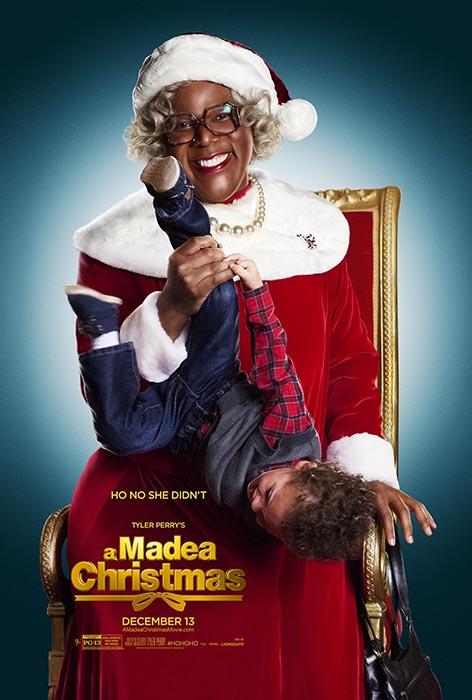 In this seventh installment of the Madea tale, Tyler Perry’s Madea makes a triumphant return. As Madea (Tika Sumpter) travels to visit her great-niece Eileen (Anna Maria Horsford), she learns from Lacey (Tika Sumpter) that she won’t be spending Christmas with her family this year. To be honest, Lacey has no intention of spending Christmas with her family this year because she is secretly married to white man Conner (Eric Lively).

Because of their distinct style of humour and storytelling, this won’t be for everyone. While this may not be for everyone, fans of Tyler Perry’s films and Madea’s antics will find this to be a holiday-themed version of their favorites. The movie and Perry’s play version of Madea’s Christmas are also available to rent on Amazon.

Mistletoe, a love tale, and festive cheer are all featured in The Mistletoe. In some ways, it’s reminiscent of the holiday-themed Pitch Perfect. Merry Christmas because The Mistle-Tones is the ideal choice for anyone who has ever thought: “I would like a Christmas movie, but give it a singing rival group twist.” Merry Christmas. The musical Black Nativity examines the process of healing old scars and re-establishing one’s familial unit. Forgiving one another and repairing a shattered family tie are the central themes of this film.