These anime characters can’t be seen without their eyepatch, whether it’s a fashion piece or an injury disguise.

As a result, in both their fictional universe and the actual world, many anime characters are designed to defy conventional expectations about what people should be like. They can be distinguished by their exceptional skills, magic, or martial arts, or by some other characteristic that sets them apart from others.

It can be a piece of clothing, an artefact, or even an eyepatch in some situations. The wearing of eyepatch is common among anime characters for a variety of reasons, including scar concealment, appearance enhancement, and even just for fun. No matter the reason, anime has a slew of fascinating characters donning eyepatch masks.

1. Mei Misaki Is A Sweet But Somewhat Creepy Girl With Two Differently-Colored Eyes (Another) As a member of Yomiyama North Middle School’s Class 3-3, Mei Misaki has been dubbed “the one that doesn’t exist.” Students and professors alike regard Mei as if she doesn’t exist because of the class’s dark secret. One of her eyes is red, while the other is green; she also has two distinct skin tones.

As a prosthetic, she can see things that a regular person can’t, thus she puts an eyepatch over her green left eye to hide it.

2. Megumin Wears An Eyepatch For Absolutely No Other Reason Than As A Fashion Accessory (KonoSuba: God’s Blessing On This Wonderful World!)

In KonoSuba, Megumin is one of the show’s most well-known and beloved characters. A Crimson Demon Clan Arch Wizard, she is skilled in the usage of Explosion Magic. She has crimson eyes and a patch over her left eye, just like the rest of the family. She doesn’t wear it for any other reason than the fact that it looks good on her. In spite of this, she loves to claim that removing her eyepatch will result in a major disaster.

3. Nui Harime May Look Sweet And Adorable But Beneath The Surface, She’s A Sadistic Eyepatch-Wearing Killer (Kill La Kill) Nui Harime is one of the main antagonists in Kill la Kill, despite her lovely and adorable appearance. Her demeanor is a mix of childishness and brutality, and she generally wears pink gowns and carries matching parasols. Injuries, on the other hand, cause her to become more aggressive and erratic.

Nui’s eyepatch serves a practical purpose: it conceals the fact that she is blind in one eye due to an injury she sustained during a combat with Isshin Matoi.

4. Kenpachi Zaraki Is Addicted To Fighting And Wears An Eyepatch That Handicaps Him (Bleach)

Violence-obsessed Kenpachi Zaraki spends most of his time in the ring. His passion for conflict has led him to feel that even death or serious injury is only the consequence of a good fight, and he will not strike a victim if they are unable to defend themselves.

As a matter of fact, he even wears an eyepatch as a disability. The 12th Division provided him with this eyepatch, which effectively disables his Reiatsu. Thus, his opponents will have an easier time combating him as a result.

5. Ken Kaneki Was A Human Who Received Organs From A Ghoul And Cannot Control His Ghoul Eye (Tokyo Ghoul)

The main character of Tokyo Ghoul is Ken Kaneki. After a catastrophic encounter, Ken’s life went from normal to unrecoverable. Ken became a half-ghoul, half-human after having ghoul organs implanted into his body.

6. Minene Uryuu Wears An Eyepatch Over The Eye That She Lost In A Tournament (Future Diary)

For the most part, Minene’s character in Future Diary can be described as unstable. If you get in the way of her plans, she’ll go on the rampage, and she’ll do all in her power to get it done. In addition, she possesses the Escape Diary, which teaches her how to get out of trouble.

Because of the Survival Game, a Battle Royale tournament to pick the God of Time and Space, which saw Minene lose her right eye, she began wearing an eye patch, even though she has a replacement glass one.

7. Rikka Takanashi Lives In A State Of Delusion Where She Possesses The Tyrant’s Eye That Needs To Be Sealed Away Beneath Her Eyepatch (Love, Chunibyo & Other Delusions!)

The main character of Love, Chunibyo & Other Delusions!, Rikka Takanashi, practices chuunibyou. The term “chuunibyou” alludes to the immature behavior of young teenagers who should have surpassed the stage of making-believe.

Rikka believes she is a sorceress since she hasn’t grown out of her pretend behavior. Tyrant’s Eye, a powerful talent that may destroy anybody who stares at her, is kept in check by an eyepatch she wears over her right. The folks in her immediate vicinity are further “protected” by her wearing colored contact lenses.

8. King Bradley Wears An Eyepatch To Conceal His Identity As A Homunculus (Fullmetal Alchemist: Brotherhood) 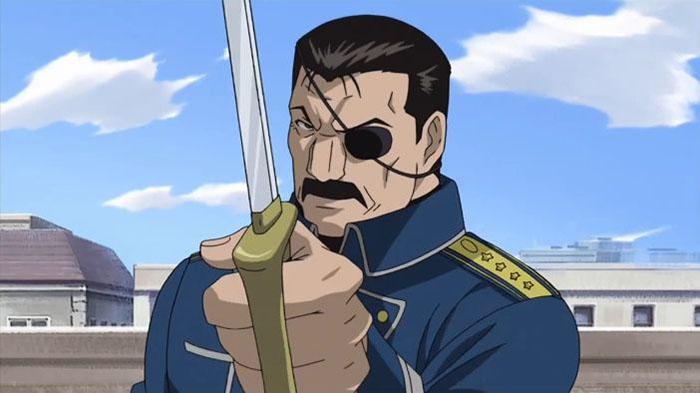 Fullmetal Alchemist: Brotherhood’s King Bradley is a villain? That’s a stretch. He’s witty, empathetic, charming, and charismatic, all of which make him an excellent leader.

Behind that cool facade is an opponent who is powerful and swift and an excellent swordsman. His Ultimate Eye is denoted by an Ouroboros tattoo behind his eyepatch. In order to keep his homunculus status a secret, he keeps this eye hidden from view.

9. Kakashi Hatake Is A Talented Shinobi With A Hidden Eye That Allows Him To Copy and Memorize Almost Any Jutsu (Naruto)

A fierce and brilliant shinobi from the Hidden Leaf Village, Kakashi Hatake has become one of the most popular anime characters to wear an eye patch to date. He’s not just a great boxer; he’s also a big bookworm who loves to laugh.

A powerful Sharingan from a deceased member of the Uchiha clan is hidden beneath a mask that covers most of his face. Kakashi is also known as the “copycat ninja” since he has the ability to learn and memorize any jutsu he sees.

10. Ciel Phantomhive Is A Witty And Sharp Earl Who Made A Deal With A Demon (Black Butler) With an arrogant demeanor and cruel intellect, Ciel Phantomhive is the current Earl of the Phantomhive Estate. He called and forged a contract with the demon Sebastian Michaelis after a sequence of tragic events in which he lost his entire family and his twin brother.

Ciel was able to begin retaliating against the people who killed his family thanks to this contract. Using an eyepatch, he hides the eye that verifies his contract with Sebastian. Changing it depending on the situation