In the last 20 years, there have been a number of excellent vegan films. It’s possible that one of these vegan documentaries may be the most popular ever!

Powerful media can be found in the film industry. Other types of art may not be able to move people the way a fantastic movie does. These particular films about veganism aid in our efforts to raise awareness about the plight of animals. They assist us in demonstrating the benefits of a plant-based diet. Because of this, they expose humans to animal brutality.

In order to better understand veganism, we’ve put together a collection of must-see films and documentaries. Those movies that we saw and liked, and that shaped our opinions and values. The films on this list aren’t all about veganism or a plant-based diet, but we believe they all have some connection to the subject. We face a growing ecological crisis because of the massive meat business, which is worth trillions of dollars. When it comes to climate change, what is the relationship between raising cows for slaughter and carbon emissions? These questions are addressed in Cowspiracy.

So, when people ask us to recommend a good documentary on the part animal cruelty plays in our coming ecological apocalypse, this riveting film is one of the first ones we recommend.

Is your diet steadily poisoning you?

This incisive study into corporate food production, distribution, and consumption by documentary filmmaker Robert Kenner answers the issue. And the results are devastating, to say the least.

Show this to anyone you believe needs a better understanding of where their food comes from. One of the best studies yet into how corporate interests and money fuel animal cruelty is presented in this book. As if those same interests didn’t care if their food was causing people to become ill at all.

Earthlings, narrated by Joaquin Phoenix and soundtracked by Moby, is a gruesome but enlightening documentary. Using animals and animal products as a metaphor for human dependence, both psychologically and financially. Humans’ dominance over the rest of life on Earth is vividly depicted in the film Earthlings.

You might be a robot if you aren’t disturbed by the end of this flick. You may also be a lizard person. Or both…

It’s not for the faint of heart. Because of its disturbing imagery, I was unable to finish the film. However, I was still able to get the gist of the film’s message. It was one of the first movies I saw that sparked my interest in being vegan. Forks Over Knives helped me see the health benefits of a plant-based diet in a new light.

In this documentary, chronically ill Americans discover how to lessen their dependence on pharmaceuticals and adopt a plant-based vegan diet in order to improve their quality of life. It’s stirring and motivating in many ways. Our non-vegan friends often ask us to promote Forks Over Knives, a classic documentary on veganism.

It’s not an easy transition to go from animal rights advocate to domestic terrorist. The solution is straightforward. Your opponent is a corporation with seemingly endless funds and lobbying strength. – You

A number of animal rights activists, including the FBI, find themselves at odds with major organizations within the United States in The Animal People, which shows their situation. Anyone who questions the strength of lobbying parasites who have infiltrated our government should watch this disturbing documentary.

For the next six weeks, three meat-loving New Yorkers will go vegan. There is nothing that could go wrong here. Or…what are the chances?

For those who aren’t vegetarians, Vegucated provides an entertaining and enlightening look inside the lives of three meat eaters. Check back to see if they make a smooth transition… or whether the pressures of today’s meat-eating society can be met. What are the takeaways? Whose diet will be permanently altered as a result of this program? What really matters is to find out. Try watching this one with a friend who is undecided. 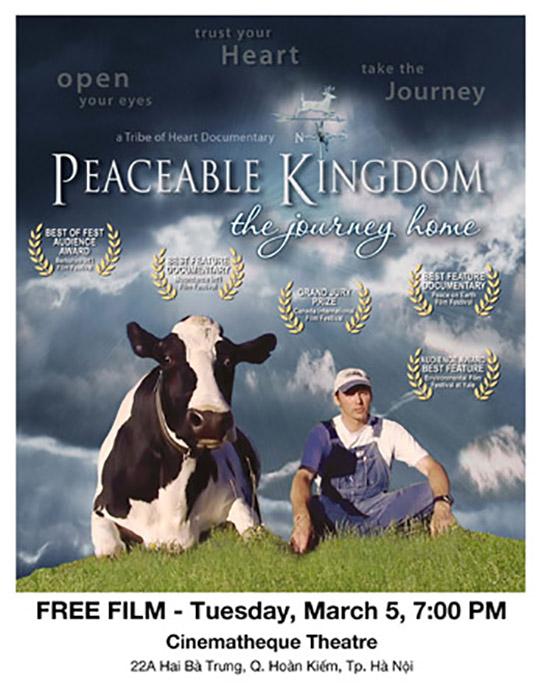 What impact may animals have on your daily existence and outlook on life as a whole?

The plot of Peaceable Kingdom revolves around love, empathy, and human growth. Documentary focuses on numerous farmers who begin to question how they live and their ties with the animals they slaughter.

On exhibit in Dominion is the worst of human brutality to animals. In this video, drones and concealed cameras are used to show the brutality of animal agribusiness, allowing us to get a closer look at the horrors.

Everyone should see this movie, even if it’s difficult to watch. This film, like Upton Sinclair’s The Jungle, is horrifying, tear-jerking, and eventually eye-opening. In other words, if you want to know what’s going on, make sure you watch it! Six vegans are featured in Live and Let Live, a documentary that follows their journeys. Ex-slaughterhouse employees and butchers discuss their stories and experiences, and how they transitioned from meat eaters to plant-based vegan diets.

For those who want to learn more about the history of veganism as well as the emotional, nutritional, and ethical reasons behind it, this documentary is for you!

This documentary is a must-see if you’ve ever wondered how fast food became such a large industry in the United States and beyond. When it comes to fast food’s history, Fast Food Nation is a must-read for anybody interested in the subject. The video is based on a book by Eric Schlosser, an investigative journalist, and takes a look at a staple of the American diet.

Even though Fast Food Nation isn’t explicitly a video on veganism, the principles you gain from this film may undoubtedly be used to eliminating meat and unhealthy food from your diet. Do professional athletes need beef in their diet? Do you have any thoughts about the average human? Is it possible to be healthy on a plant-based diet for everyone? Even those of us who often strain our bodies to the limits of their ability?

These are only some of the issues that are raised in the documentary The Game Changers. Many elite athletes have gone vegan and reported positive improvements in their performance.

In The Game Changers, a fascinating look at the power of a vegan diet is provided. For those of you who are obsessed with working out and think you need to consume meat in order to get in shape, this is the movie for you.

For the life of me I can’t figure out why we’re all so unable to get along. Our incapacity to live together with nature is examined in depth by Unity….

As a film, Unity isn’t exactly a call to vegetarianism, but it does raise questions about the harm we inflict on the world and those who live in it.

The story of a young woman and her genetically modified “super pig” is the focus of the lovely fantasy film Okja. You’ll be moved to tears by this heartwarming depiction of the bond between a child and a pet.

In the end, this isn’t a strictly vegan movie. In the end, though, the plot twists and turns into a look at how disgusting our food supply really is. If, after seeing the film, you’re still planning to eat a pig, you might want to reevaluate your capacity for compassion and empathy. One of the most heartwarming films of the year shows how 15 animal rescue shelters throughout America are helping to save a small fraction of animals that would otherwise be slaughtered.

In the end, if you’re looking for hope when it comes to animal rescuers, you should check out Called to Rescue.

What the Health analyzes the link between meat-based diets and chronic disease from the makers of Cowspiracy. An exposé of the cover-up performed against the general people by the meat and pharmaceutical sectors is explored in this documentary.