There are twelve science fiction movies featured in the book Films from the Future (14 if you include the “extra” movies in the first and last chapters!).

Together, they convey a tale about emerging and converging technologies, the opportunities they offer, and the problems of developing and using them in ethical and socially responsible ways.

You’ll need to read the first two chapters of the book to see the rest of the extra movies! In spite of some questionable science (Dinosaur DNA can’t be reproduced and used to bring these beasts back from the dead), Steven Spielberg’s masterpiece is a great starting place for investigating modern-day genetic engineering and “resurrection biology.” Synthetic biology and CRISPR-based gene editing are transforming our ability to change biological “code,” allowing us to consider the possibility of resurrecting extinct species. For the time being, we won’t be able to view living, breathing dinosaurs, but scientists are hoping to bring back wooly mammoths and other creatures from the Pleistocene era and create, not Jurassic Park, but Pleistocene Park

Never Let Me Go, the book by Kazuo Ishiguru, and the film based on it, were never supposed to be science fiction works. Yet, they serve as a terrifying reminder of how readily a much desired technological advancement can undermine society’s moral character. Human cloning is the technology in issue. Since the birth ofDolly the Sheepin in 1996, the technology has continued to advance, and it is now near to allowing people to be cloned. Naturally, this is a contentious ethical issue. Human reproductive cloning is likely to occur at some point in the future. Dogs, cows, and other animals can already accomplish this, and while humans are far more difficult, this is more a matter of “watch this space” than “not in my lifetime.” ” We’ll have to deal with the ethical minefield that human reproductive cloning creates, of course. Mind-controlling “halos” and sophisticated displays abound in Steven Spielberg’s Minority Report, as does pervasive biomonitoring. As a developing technology in today’s society and a warning against its misuse, crime-prediction stands out. While the movie’s precogs can’t see into the future, we’re surrounded by a growing number of people who believe that science and technology can identify where and who will be engaged in a crime before it happens. In an effort to anticipate crimes before they occur, researchers are turning to functional MRI scans, artificial intelligence, and data analytics. Other attempts are growing frighteningly adept at forecasting what people will do despite the fact that some of them are clearly barking up the wrong tree. Underneath all of this, however, is the question, “Should we?” Is the response “no” likely in most cases?

In 2007, the journal Nature published an article with the headline “Professor’s little helper” on the usage of “smart medications” by academics. Everyone from academics and students to entrepreneurs seems to be interested in pharmaceutically-enhanced intellect, and as our knowledge of what gets our brains going grows, so does the intricacy of these synthetic additions. Smart drugs—whether Amazon-orderednootropics, LSD-containing “stacks,” or simply every-day doses of caffeine—are becoming more and more commonplace in our daily lives. Surprisingly, it appears that many individuals are fine with this. How will they feel when you have to get dosed up to even get to a first interview in an increasingly competitive job market?

Elysium is a film that preaches about the horrors of the “1 percent” having too much influence over the “99 percent,” but it takes itself too seriously. Because this is a film with a social message, possibly the veracity of the science in it falls short. Even still, there are striking similarities between the seemingly-miraculous medical pods used by the privileged in the movie and the developing technology of bioprinting. Using a combination of cell-containing “bio-inks” and biocompatible support materials, scientists have been building 3D printers that can produce facsimiles of human body parts for some years now. Furthermore, they’ve just begun to significantly speed up and enhance these procedures, which could lead to 3D-printed replacement bones, skin, and crucial organs in the next several years.. Prellis Biologics’ objective is to 3D print the “entire vasculature of a human kidney in twelve hours or less,” and they’re well on their way to accomplishing this. Which patients will get the first 3D-printed organ replacement? If you’re looking for a film that explores what it means to be human in an era of bodily modification, go no farther than the original Ghost in the Shell. The technology in this stunning Anime movie hints strongly at what’s to come, even though we’re decades away from it. Implanted devices like defibrillators are already commonplace in our society. Elon Musk’s companyNeuralinkis also working hard on building brain-computer interfaces that replicate the neural lace technology in Iain M. Banks’Culture novels. In addition, there is a strong (though somewhat fringe) body-hacking subculture of persons who want to implant themselves with magnets, RFID chips, and other things. We may be on the verge of a massive boom in body-augmentation technology thanks to advances in robotics, internet-connected devices, and artificial intelligence. Until we start to wonder what happens if we need to upgrade our software but don’t want to pay for it, or if a recall occurs…

Many science fiction films depict the rise of artificial intelligence. People are routinely crushed to death by their AI rulers in Terminator-style scenarios. Ex Machina, on the other hand, employs a more subdued strategy that is ultimately more sinister. When Ava, the movie’s artificial intelligence, learns how to manipulate people via a Google-like search engine, she discovers how to fulfill her aims. We are all fooled by our instincts, mental shortcuts, and inherent prejudices, but intelligent robots will be able to learn about them without the same constraints, according to the central thesis of the film. By constructing AIs that understand us better than we do ourselves, we put ourselves at risk of having our own intelligence turned against us. And the most terrifying part is that we won’t even notice or give a damn. Thankfully, this is all just science fiction.

For those unfamiliar with the term “singularity,” it is a term that refers to a time at which machines become so powerful that it is impossible to foresee the future. I have to admit that it isn’t a terrific movie. This is a fantastic method to examine the myths and realities of merging technology. A glimpse of something that will become increasingly essential is hidden amongst the science-fantasy revelry: tampering with reality’s “base-code.” We’ve been accustomed to the idea of coding in cyberspace, dealing with the ones and zeros, and bits and bytes of digital code, during the last few decades. The biological code of DNA is becoming second nature to humans. When it comes to designing new materials and technologies, we’re getting better at working with the “code” of atoms and molecules. “base-codes” allow us to transform reality in each of those three areas: cyber, bio, and materials. When we learn to cross-code between these three base-codes, things get pretty interesting. How can we be sure? In fact, we’ve already begun! 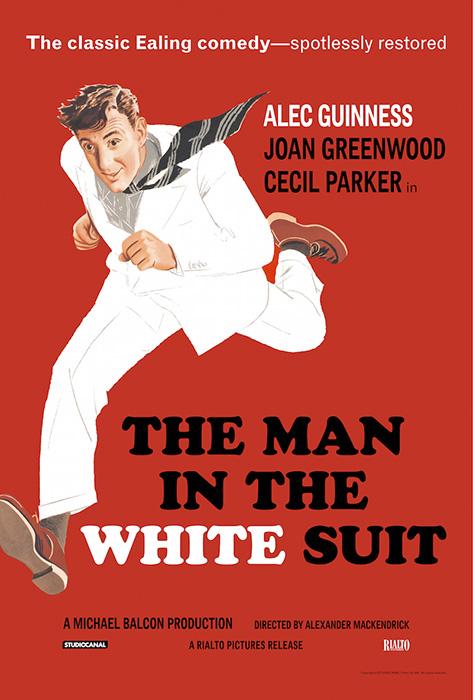 The 1951 Ealing comedyThe Man in the White Suit, on the other hand, is solidly grounded in reality when it comes to its depiction of new technologies. Although it’s from the ’80s, this is still one of the best depictions of new technology possibilities and the resulting social issues. It’s also an excellent film for learning about nanotechnology, despite its focus on polymer and textile science. It’s a story about what happens when a stain-resistant cloth that doesn’t require cleaning is invented. At the time, I’m sure the producers felt this was a crazy notion. I wonder what they would have made of the protests outside Eddie Bauer in 2005 when the business began selling pants with — you got it — stain fabric enabled by nanotech. In addition to anti-stain clothing, nanotechnology may be found in everything from smart phone screens and computer chips to sunscreens and solar cells, to name a few. The Man in the White Suit still raises many of the same questions it did more than half a century ago.

If you were looking for a list of sci-fi movies that shed light on current trends in science and technology, Dan Brown’sInferno might not be the first name that comes to mind. I must admit that I appreciate the shallow cliffhanger-driven mindlessness of the story (which I must admit I rather enjoy). We are all in risk of extinction if we don’t substantially cut our population, and a mega-rich scientist believes he has the answer. Unfortunately, in the movie, his solution is to create a virus that will kill half of the world’s population. In spite of the fact that the film is primarily a romp through time for Dan Brown’s hero Robert Langdon, the underlying technology has deep connections to the real world. There were two attempts in 2012 to publish information on how to make the H5N1 influenza virus more lethal by making it airborne. As a result of the heated debate around this “gain-of-function” study, the findings were withheld from publishing until a number of organizations had had an opportunity to examine its soundness. Using cutting-edge genetic engineering tools, this type of research is becoming increasingly straightforward to carry out. Researchers say it’s necessary to look into the possibility of lethal virus changes before they occur. They could, of course, inadvertently start the pandemic they are trying to prevent, or someone else could utilize the research in a less charitable manner. Gain-of-function studies aren’t taken seriously by terrorists or the military due to the time and expense involved. However, what about rogue scientists and businesspeople with the bizarre notion that wiping out half the world’s population will make it a better place? Because we are the primary cause of the Earth’s climate change, it is impossible to ignore this fact. In spite of this, there are just a few films that successfully tackle this topic. Because The Day After Tomorrowis not one of them. Despite its lack of scientific validity and muddled messaging, it is entertaining to watch and does at least up the discussion about climate change and how we could manage the muddle we are making of the world around us.. The opening scenes of the Larson B ice shelf in Antarctica collapsing in 2004 were meant to be startling, thus this is significant. Even still, the real-life breakup of the Larson C ice shelf in 2017 was a far cry from this. Even though it isn’t explicitly addressed in the film, scientists and engineers are considering geoengineering as a means of combating climate change. To some, the concept of deploying more technology to repair the problems we’ve created via our careless use of technology seems absurd. There is an array of technologies being developed to either reduce the quantity of sunlight reaching Earth or reduce the concentration of greenhouse gases like carbon dioxide, which are the primary causes of the problem. Even if geoengineering isn’t the subject of The Day After Tomorrow, it’s a fantastic place to start the discussion.

Contact isn’t really a film about technology per se. As a movie about science, or more particularly, the intricate link between science and belief, it is important to note. Another benefit is that it serves as a good introduction to the idea of searching for life outside of Earth’s atmosphere. There are few better places to begin to understand what it’s like to be a scientist, driven by your dreams but held back by your reason and dedication to evidence, than this film. The expanding number of exoplanets identified, including several that are clearly Earth-like, provides an excellent backdrop for this hunt for extraterrestrial life. For those who want to ponder what may happen if and when we discover “alien” life here on Earth (as opposed to “alien” life from the stars), this book provides a glimpse into what might happen. That’s where we started withJurassic Park and gene editing, and where we are now.