What really gets under my skin?

Pink Floyd is a unique musical entity. Everything about them is unique.

Nevertheless, there are Pink Floyd-like bands out there, as well as others that share similarities besides their sound.

Even though these bands aren’t as good as the originals, they’re as close as you’ll get.

And since there will be no new Pink Floyd songs in the future, we’ll have to settle for something else if we want to listen to new music.

In the event that you enjoyed Pink Floyd, you’re likely to enjoy most of the bands listed below. Let’s get right to it and see what we can find out about them.

Despite the fact that Pink Floyd is a singular band, other acts from the same era had a sound that was strikingly similar to theirs. When looking for bands similar to Pink Floyd, it is simple to look no further than Emerson, Lake, and Palmer, the venerable progressive rock trio. Keith Emerson, Greg Lake, and Carl Palmer came together to form a supergroup that included bassist Greg Lake, a seasoned rock drummer, and Lake on keyboards.

The band, which was formed in 1970, gave rock music a unique twist by fusing classical and jazz elements into it. Their breakthrough came with the release of Pictures at an Exhibition in 1971, on which they reworked the ten-piece suite by Modest Mussorgsky.

The band initially disbanded in 1979 but reformed several times after that. Emerson, Lake, and Powell were formed in the mid-1980s with Cozy Powell on drums.

Powel had a devoted following thanks to his time spent with Rainbow. Due to his tour commitments with Asia, Palmer was unable to attend the reunion.

This was followed up by a 40th anniversary concert in 2010 and several more tours throughout the 1990s. It turned out to be the end of the road for Keith Emerson and Greg Lake, who died in 2016.

Yes has been making music since the late 1960s and is one of the most well-known. It’s safe to say that their work had a significant impact on the entire musical landscape from the ’70s through the present day.
However, they are underappreciated for their efforts. However, despite the fact that they’ve been compared to Pink Floyd, particularly due to the abundance of psychedelic elements in their music, they’re a wholly unique group of musicians.
It’s interesting to note that Yes is currently without any of its founding members. To be clear: Yes Featuring ARW is a group that includes original vocalist Jon Anderson as well as classic members Trevor Rabin on guitar and Rick Wakeman at the keyboards (also known as Anderson, Rabin, and Wakeman).
Over the years, the band’s sound underwent many transformations. Owner of a Lonely Heart was one of the band’s biggest songs, and they even released a commercially-oriented pop-rock album 90125 at one point. It’s their one and only standout karaoke track.
However, if you’re looking for more Pink Floyd-inspired music, we recommend their earlier releases, particularly a record like Tales from Topographic Oceans. 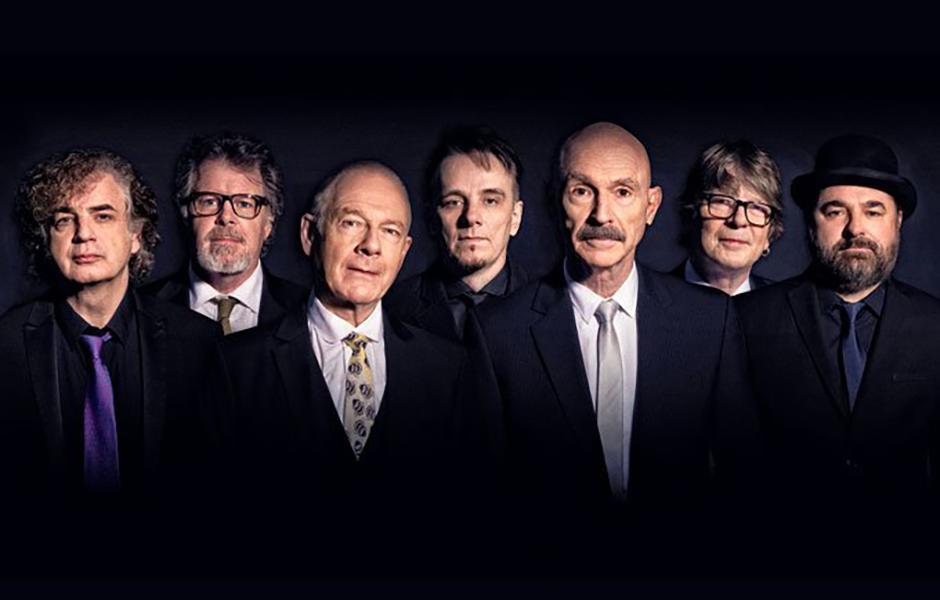 It’s impossible to say who started progressive rock, but King Crimson is often associated with the style, even though it wasn’t until decades later that the genre was officially defined.
To put it another way, it’s because they revolutionized the look by developing and elevating it to new heights. The band’s debut album and the legendary masterpiece 21st Century Schizoid Man are what most rock fans remember them for.
Other than that, there’s some really good stuff in there, such as Epitaph, Starless and Discipline as a whole from 1981.
Tool cites King Crimson as a major influence, and many newer listeners will be familiar with them as a result. As a result, we did not include them on our list of bands that are similar to Tool because their sound differs significantly from theirs.
King Crimson’s lineup changed over the years, but guitarist Robert Fripp remained the group’s primary composer and creative force.
However, the band’s lineup featured a number of talented musicians, including Greg Lake, the band’s bassist who also sang on the band’s debut and second albums.
Robert Fripp is a mysterious figure. He was a recluse who also happened to be a gifted musician who created some truly remarkable and mind-blowing music.
In order to fully comprehend the album’s title track, for example, one must be well-versed in polyrhythmic theory and practice. It’s impossible to go wrong with King Crimson or Robert Fripp’s work, even if you don’t understand everything he’s doing.

Transatlantic, a progressive rock supergroup, was established in 1999. Dream Theater drummer Mike Portnoy is on board as well as Neal Morse, Pete Trewavas, and Roine Stolt.
The combined sound of such a talented group of musicians must be absolutely incredible!
Because the musicians had to return to their primary bands, the sole band only lasted until 2002. They did, however, reunite in 2009 for a tour. They’re still active on and off, and their discography includes five albums.
Daniel Gildenlöw has played a significant role in the band’s live performances despite not being a formal member. However, this isn’t always the case. Ted Leonard filled in for him on occasion.
Their sound is a reflection of the main projects and well-known bands of the musicians involved. They, on the other hand, go their own way.
There are some elements in their music that are similar to Pink Floyd, but they aren’t identical. Pink Floyd fans love Transatlantic, so give them a listen if you’re one of them. There’s no denying that The Doors should be at the top of this list. Even though they started in a different period, many of their songs have psychedelic overtones, similar to Pink Floyd.
While they have their own sound and style, they’re part of the same band family as Pink Floyd and are well-liked by Floyd fans. You’ve almost certainly heard of The Doors if you like Pink Floyd.
Ray Manzarek, Robby Krieger, John Densmore, and the legendary frontman Jim Morrison formed the band in 1965 in Los Angeles. It is he who is most associated with the band’s legacy.
Despite Morrison’s tragic death, the band didn’t last long, but they left an indelible mark on modern music. Anyone who enjoys bluesy psychedelic rock will enjoy The Doors.

Porcupine Tree, a band that pushed progressive rock and psychedelic boundaries after Pink Floyd’s formation, can be found two or three decades later.
The band, led by Steven Wilson, pushed the boundaries of progressive rock, paving the way for future musicians. Porcupine Tree was in existence from 1992 to 2009, releasing a total of ten studio albums during that time period.
On a few occasions, there have been discussions about getting things back on track. However, the likelihood of this happening is extremely low.
Whatever the case may be, you’ll be able to appreciate their innovative and wildly varied progressive rock style. Every album has a unique story to tell and is well worth listening to if you enjoy music like Radiohead or Pink Floyd, which combines various styles into a cohesive whole. Porcupine Tree’s dissolution was largely due to Wilson’s belief that the band’s sound had become too stale.
As a result, he made the decision to leave the band and pursue a solo career, eventually becoming well-known. What’s really exciting is that he went from classic progressive rock to full-on pop music, even hiring a guitar master like Guthrie Govan.
You’ll find a wide range of styles in his catalog, as well as many creative and unexpected combinations of various elements.
The Raven That Refused to Sing, his 2013 album, is a must-have for fans of progressive rock and jazz fusion (And Other Stories).
Routine from the Hand, for example, is a depressing track. Album. Is. Unable. To. Be. Erased. To the Bone and The Future Bites are good examples of progressive pop. Whatever the case may be, if you’re a fan of Pink Floyd, you’ll enjoy at least some of his work.

Riverside is a unique mention in this list because it is not located in California. Outside of progressive rock fans, few people have heard of this band.
This Polish band is known for its slightly ethereal and psychedelic sound. They’re from Poland. Pink Floyd fans who give them a try, despite the fact that they aren’t as well-known or popular as some of the others on this list, usually fall in love with them.
You can start with their 2005 album Second Life Syndrome if you want to go in the right direction. The album’s title track, which clocks in at 15 minutes, is a fusion of progressive rock, progressive metal, and psychedelic rock.
The solos aren’t fast or flashy, but they’re very expressive. To put it another way, they sound a lot like David Gilmour-style solos.
Riverside currently have seven studio albums under their belts, all of which have received generally positive reviews. Honestly, if you like progressive and psychedelic rock music with a modern twist, none of these albums will disappoint. It’s hard to overstate how underrated Camel is, especially considering how similar they sound to Rush they created back in the ’70s. Andrew Latimer, the band’s multi-instrumentalist and singer, fronts the group.
The band’s sound has evolved over time, but the band’s prog-rock roots and Andrew’s unique creative vision remain. If you like their early work, you’ll love what they do in the 80s and 90s.
Pink Floyd is a favorite band of many Camel fans because of the obvious similarities between their music and that of the band. The albums Rajaz (1999) and Stationary Traveller (1984) are excellent starting points for getting to know the band.

How much do you know about each of these bands already, or are you discovering them for the first time? Listen to the ones you’ve never heard before. If you’re a fan of Pink Floyd, you’ll likely enjoy all of these artists.
We’re aware that there are a slew of other bands deserving of inclusion on this list. Do you think there were any that were omitted that should have been included? If this is the case, please share your thoughts in the section below.
Check out our list of progressive rock bands like Slipknot or Polyphia and bands like them if you prefer music with a little more grit.