Anime is known for having a devoted following. Pages and pages of online forums can be devoted to arguing the merits and drawbacks of anime characters. These anime devotees can also dress up as their favorite characters through the practice of cosplay. But what if you could create your own own cast of anime characters? Things that were unattainable in the past are now possible thanks to AI anime creators.

Most of the creators of anime characters profiled in this article are can be found on the internet. Because you don’t have to install any program or extension, they are convenient and straightforward to use. Toongineer Cartoonizer is a tool that turns your selfies into anime-style illustrations. If you have a picture of yourself that you want to make into an anime or cartoon character, this anime character builder may do the trick. Toongineer Cartoonizer, in contrast to the other programs on this list, allows you to create anime-style visuals from virtually any real-world image.

Waifu Labs provides you with an AI artist who creates beautiful images of waifus. In order to create your own unique waifus, you can use this waifu maker. From the samples, select a waifu character that you like the look of. It will be able to produce 16 different waifus as you progress, much like a genuine artist would. Click here to start making waifus right away.

3. This Waifu Does Not Exist 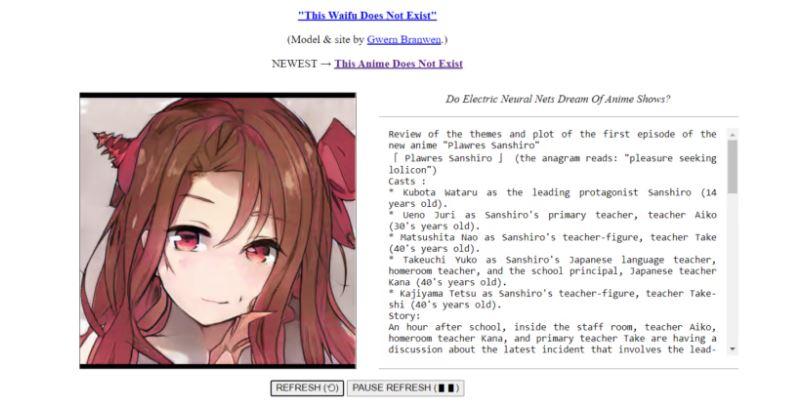 This Waifu Does Not Exist is an excellent option for people who want to get waifu or anime images online without any problem. Clicking on the “Refresh” button on this website will bring up a new set of fictitious waifs. To produce anime faces at random, StyleGAN 2 uses deep learning. The anime plot developed by GPT-3 can also be read.

Automated anime face generation is possible thanks to Crypko’s GAN (generative adversarial network). Developed by the same developer as Crypko, MakeGirlsMoe is recognized as a commercial version of the game.

Crypko Cards, a special code that may be used to generate a certain anime character, can be purchased through this program. More characters can be generated by combining these digital cards.

Illustrators who work in the anime business use it because it is capable of keeping pace with human pros in terms of speed and accuracy. Crypko download, on the other hand, is now unavailable.

In order to create MakeGirlsMoe, a group of students from Fudan University, Carnegie Mellon University, Tongji University, and Stony Brook University worked together. Anime character drawings can be produced by this anime lady designer without the assistance of humans. At the time of its release, it was a huge smash.

The value of the photos generated by this AI anime character maker would be greatly diminished when a huge number of images were generated, hence it is only provided for non-commercial usage. It makes it simple for anime fans to design their own characters.

When creating an anime character, you have a number of options at your disposal. For example, you can change the character’s look by changing the character’s haircut and color, as well as his or her eye color and whether or not he or she opens their mouth when smiling.

PaintsChainer was created by PFN in January of this year and is currently in development. Since then, it has been widely shared on Twitter and other social media platforms. Anime characters can be created by uploading a photo of a female subject. With deep learning technology, you can even upload a sketch and have it automatically colored. Adding color suggestions might also help you regulate the colorization outcomes.

Pixiv Sketch (a drawing app) integrates with this and allows for automatic coloring.

In order to increase the quality of anime images, check our Anime Image Enlargers Review.

The Japanese term “Waifu” refers to a fictitious male or female heartthrob in manga, anime, and video games. Waifu is so important to some of her supporters that they treat her like a real person.

This AI-powered program produces and presents users with sixteen fictional female characters based on such cultural practices. Regardless of what you choose, you’ll be able to adjust the color palette to match. Hairstyles, dress, and facial traits are all important considerations after that. Each feature has to be selected one at a time. Nonetheless, it’s a nice thing that you can see how this feature will look before you make a final decision. After you’ve finished, you can even purchase a printed pillow or poster bearing your Waifu’s image.

An anime avatar character can be created using this internet service. All you need to do is enter your email address. Start from scratch and design your own unique anime character. Once you’ve decided on a gender, you may customize everything about your avatar’s appearance, including their face, eyes, nose, lips, brows, and hair. Your avatar can also have a few accessories, such as spectacles or instruments.

An anime character might be enjoyable to create from scratch, but it also takes a lot of work to discover the ideal option for each aspect..

Create your own anime character from scratch with this offering. It’s up to you how you want to customize the character, including hairstyles, eye colors, clothing, and more. A preview of the final product is also available. However, there are no male characters to be found.

As a side note, this anime girl character creator has more well-designed possibilities.

Anime characters can be made here, but you can also create your own unique symbol and avatar with this tool.

You may customize simply the looks of the female and male characters in this anime character creator. It is possible to alter gender, as well as your head shape, attire, and even your nails. For your convenience, you can select from a range of options.

It’s also possible to customize each item’s appearance by changing the color. If you’re looking for a unique design for an anime character, you can use bone wings and batwings, for example.

If you have interests in how these products work, you can go to Github to check some methods, like U-GAT-IT. If you’re also interested in generating your own portrait, check Portrait Generators Review to find out more.