As an alternative to Disenchantment, here are ten other shows in the same vein: fantasy that’s at least a little aware.

Here we are at the end of Season 2 of Disenchantment, and it has a lot of the same issues as Season 1. Matt Groening has turned his calculating eye to fantasy after thoroughly satirizing the family sitcom and sci-fi genres. The results have been mixed. A lot of the show’s humor falls flat, despite the good chemistry between Abbi Jacobson as Princess Bean and Nat Faxon as Elfo and Eric Andre as the slightly sinister Luci. However, the show has great potential, which will hopefully be realized in the upcoming Seasons 3 and 4. We’ll have plenty of ambitious fantasy to choose from until then, so we’ve selected 10 other shows in the same vein. However, unlike many Jim Henson productions, The Dark Crystal: Age of Resistance never devolves into gloom. As a prequel to The Dark Crystal, this Netflix series tells the story of the Gelflings, a kind people who live peacefully alongside the Skeksis, and the titular Dark Crystal, a magical artifact that can make its owner immortal by draining the life essence of those it touches. There are three Gelflings, each with a different goal, who follow each other in Age of Resistance as they try to incite a revolution against the evil Skeksis. This show has it all: political fairyland intrigue, eye-popping animatronics and puppetry, and more.

Those of you who have read Neil Gaiman and Terry Pratchett’s genre-bending apocalyptic novel “Good Omens” (Workman, 1990) know why “Good Omens” is a great choice for Disenchantment fans. The 2019 Amazon Prime reimagining retains a great deal of the original’s charm. An odd mix of cynicism and sweetness accompanies the off-kilter humor. Despite the large cast, each character is likable and memorable in their own right. For those who enjoy world building, there’s even a comprehensive cosmology included. In the lead roles of Aziraphale and Crowley, respectively, Michael Sheen and David Tennant steal the show as angels and demons who don’t want the world to end in a prophesied Armageddon. 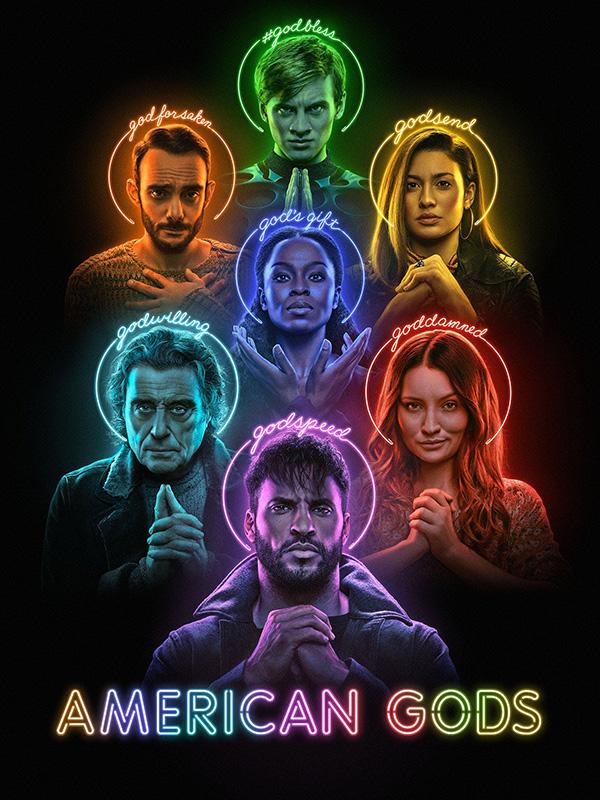 You should start with American Gods if you enjoy twisted retellings of well-known stories. A former criminal, Shadow, joins forces with a mysterious benefactor, Mr. Wednesday, in this adaptation of Neil Gaiman’s ambitious novel of the same name. A battle is raging between the Old Gods of antiquity and the New Gods of media and technology. The two must work together to survive. A mysterious force may be manipulating both sides for its own gain, as Shadow discovers as the show goes on. Mr. Wednesday has plans of his own. Disenchantment made fun of fantasy tropes, and American Gods does the same with mythology.

Philosophy, morality, religion, and self-actualization are all topics that could quickly become pretentious on television. The Good Place, on the other hand, is hilarious and delightful. Eleanor Shellstrop, a saleswoman who dies and ends up in the heavenly Good Place, appears in this magical sitcom. This Eleanor Shellstrop isn’t the right one. Our protagonist hasn’t actually led a morally upright life. By going on a series of spiritual adventures and learning everything she can about ethics and the “rules” of various possible afterlife scenarios, she attempts to better herself. A fantasy/comedy in a half-hour format, The Good Place is an easy binge to watch even though it’s a different kind of show than Disenchantment.

The Simpsons and Futurama have much better musical numbers if you love Disenchantment’s setting and humor, so give Galavant a shot. the movie follows Sir Gary Galavant on his quest to save his love Madalena from the evil King Richard in high fantasy/comedy mashup. It’s a classic plot, but there’s a twist: Characters frequently break into songs composed by superstar composer Alan Menken, who wrote many of the show’s memorable melodies. The jokes are silly, the story is heartfelt, and the guest stars, including Ricky Gervais, Weird Al Yankovic, and the late, great Rutger Hauer, are all familiar faces from genre television. Despite its flaws, Disenchantment gets points for having a unique female lead character. When it comes to heroes, neither Bean nor Korra are your typical adolescent types. Follows the adventures of Korra, a young woman who can magically manipulate the elements of earth, air, fire, and water in Avatar: The Last Airbender. As the Avatar, Korra has the ability to save the world, but she also has to deal with the issues of family, friendships, and romance that come with being a teen girl in this world. The show leans more toward action than comedy, but it’s still quite amusing, especially if you enjoy slapstick. It’s worth watching. The characters in The Legend of Korra will almost certainly make you laugh, whether it’s at Bolin’s expense or Tenzin’s.

Despite the fact that Eureka leans more toward science fiction than fantasy, the science presented here is approachable, and the humor is big. The show centers on U.S. Marshal Jack Carter, who is appointed sheriff of the fictional Oregon town of Eureka after being promoted from his previous position. In fact, Eureka is a military-sponsored experiment designed for superhumans, while Jack is a regular guy from the suburbs. Eureka, like Disenchantment, makes use of well-known tropes like mad scientists, parallel universes, time travel, and extraterrestrial life. This is closer to another Groening show, The Simpsons, in terms of tone. Because everyone in town has a unique story to tell, everyone gets a turn in the spotlight once or twice. Futurama, a 1999 Groening spoof of sci-fi, has a lot in common with Disenchantment. Fans have been debating between Futurama and The Simpsons for the past two decades, and I doubt they’ll ever come to a consensus. Futurama, on the other hand, is a television gem that’s hard to come by these days. A love letter to classic sci-fi and a dissection of some of the genre’s most persistent blunders, the show manages to be both heartfelt and hilarious. In 1999, delivery boy Philip J. Fry is cryogenically suspended in time until the year 3000 and everything begins. The Planet Express crew finds him thawed out, so he joins them in the future, when they are making deliveries all over the galaxy and messing them up in hilarious ways.

While Buffy the Vampire Slayer is a fantasy and comedy show, it also incorporates elements of horror, comedy, and drama, and it does so admirably. While Buffy is a high school student, she’s also the legendary Slayer, doomed from birth to battle demons, vampires, and other forces of darkness as they threaten the human race. The fact that Joss Whedon created and wrote a large portion of the show means the dialogue on Buffy is full of biting one-liners. In addition, there’s a rich mythology to be discovered, replete with fantastical beings of light and dark. If your favorite part of Disenchantment is Princess Bean, you’ll probably enjoy Buffy as well. Not his first big project, but it remains one of his most enduring (Disenchantment frequently mentions Groening’s earliest comic, “Life in Hell”). Without a doubt, if you haven’t seen The Simpsons, you’re missing out on a classic television show and an important part of American pop culture. If you’ve stumbled upon Disenchantment without first watching the Simpsons, you need to go back and watch the episodes with Homer, Marge, Bart, Lisa, and Maggie. Just be aware that the show’s hilarity won’t last indefinitely; most fans recommend tuning out after Season 10.