Vogue Paris has put up a list of the top fashion films you should see at least once in your life: A look back into the life of one of the most well-known French fashion designers, Yves Saint Laurent, by Jalil Lespert shows how the personal and the professional frequently collide. Throughout the film, which begins in 1957 when he was named Dior’s creative director and ends in 1961 when he founded his own design house, the film attempts to convey the couturier’s complicated genius. The video explores all sides of his life, from his inspirations to his failures, including the infamous Russian Ballet 1976 collection. Gaspard Ulliel, who performed the part of Saint Laurent in Bertrand Bonello’s Saint Laurent that same year, was beaten by Pierre Niney for the César award for Best Actor.

As an assistant to Runway magazine editor-in-chief Miranda Priestly (Meryl Streep), Andrea Sachs (Anne Hathaway) endures a cultural shock. Miranda Priestly is quick to pick up on Sachs’ disdain for fashion’s superficialities and her disregard for her own personal looks. If you’re a fan of Lauren Weisberger’s 2003 novel, you’ll love this film version. There are many fascinating aspects to the lives and times of Saint Laurent in Bertrand Bonello’s Saint Laurent. Viewers are whisked back to the 1970s, a time when the designer was renowned for both his inventive and refined fashion senses. For this film, the director takes us on a magical journey into his or her designer’s head. With his vivid representation, Gaspard Ulliel depicts the fashion designer’s journey into the world of drugs and partying in attempt to overcome his inner problems.

Funny Face was the precursor to Prada. During the 1950s, Audrey Hepburn finds herself in the role of Cinderella in a different time and place. Stanley Donen’s musical comedy, one of the last of its kind, stars Jo Stockton, a philosophy-obsessed bookstore employee in Greenwich Village who, after some persuasion, is cast as a model for Quality magazine, an American fashion periodical. Maggie Prescott, editor of the magazine, and photographer Dick Avery try to persuade Stockton to be a model for them. At first, Jo and Dick’s worlds don’t appear to fit together well, but they fall in love and find a way to merge them into one.

Anne Fontaine’s biography Coco before Chanel is a comprehensive look at Gabrielle Chanel’s remarkable life, from her infancy in boarding school to her first dressmaking abilities in Paris, to the beginning of her design house. She effortlessly embodies this great Mademoiselle, who liberated women with her sleek, plain attire. For the French director, who wanted to better understand the woman behind the fashion icon, he decided to focus on her before her period of fame, and presents an injured, neglected, and sorrowful lady. Finally, a film that captures the essence of Coco. A young woman journeys to the city of angels in the hopes of launching a career in modeling. Others in the modeling industry are envious of her swift climb to popularity and her seemingly flawless appearance. While some models admire her, others will go to great lengths to prevent her from succeeding. Nicolas Winding Refn’s The Neon Demon, starring Elle Fanning in her most disturbing portrayal yet, is in competition at the 2016 Cannes Film Festival.

In the 1920s, Paris was a different place. Everyone is talking about Coco Chanel. Affluent Parisians flock to her boutique at 5 rue Cambon to treat themselves to feminine and sleek creations marked with the distinctive double C. Boy Capel, the designer’s longtime boyfriend, died in an automobile accident in December 1919, and her grief is evident in her work. When she meets the composer Igor Stravinsky, who was playing with his work Sacred Spring at the Théâtre des Champs-Élysées a few years previously, she is overcome with emotion and tears flow freely. She is fascinated by the artist’s magnetism and personality, so she hosts him and his family at her Garches Villa and becomes his mistress. Coco Chanel & Igor Stravinsky is a wonderful film by Jan Kounen, in which Anna Mouglalis and Mads Mikkelsen embody this emotional bond between creative minds.

I highly recommend William Klein’s satirical film on the fashion industry. “Who are you Polly Maggoo?” is a television report that Grégoire Pecque (Jean Rochefort) appears in on a visit to Paris in 1966. This quirky and satirical picture is a celebration of the best of the 1960s’ style and charm. While in Europe, Tilly (Kate Winslet), a successful dressmaker, returns to her little town in Australia. Since her upbringing was wrecked by her previous neighbors, Tilly’s motives aren’t so pure. The Dressmaker depicts a sleazy, gossip-fueled society in which rumors play a major role.

Woodcock (Daniel Day-Lewis in his final role) is the king of London’s haute couture in the 1950s, and the film depicts his story. Paul Thomas Anderson directs an enchanting love story in this stylish fashion documentary. It also won an Oscar for Best Costume Design that year. This year marks 20 years since Ben Stiller and Owen Wilson first teamed up in Startsky & Hutch (2004) and have since featured in 13 films together, including the Meet the Parents trilogy, Zoolander, and The Royal Tenenbaums. Derek Zoolander, a male model played by Stiller, is indoctrinated by one of the fashion industry’s most ruthless individuals in this funny film. In addition to David Bowie and Milla Jovovich, Tom Ford and Natalie Portman, and Lenny Kravitz, this picture has the most stylish cast ever.

Costumes for this Olivier Assayas-directed film starring Kristen Stewart were donated by none other than Chanel. In 2013, the actress became a Chanel muse when she walked the runway at the Métiers d’Art Paris-Dallas fashion show. Who is to blame for her eventual decision to steal from her employer?? Personal Shopper director Olivier Assayas won the Best Director prize at the Cannes Film Festival in 2016. 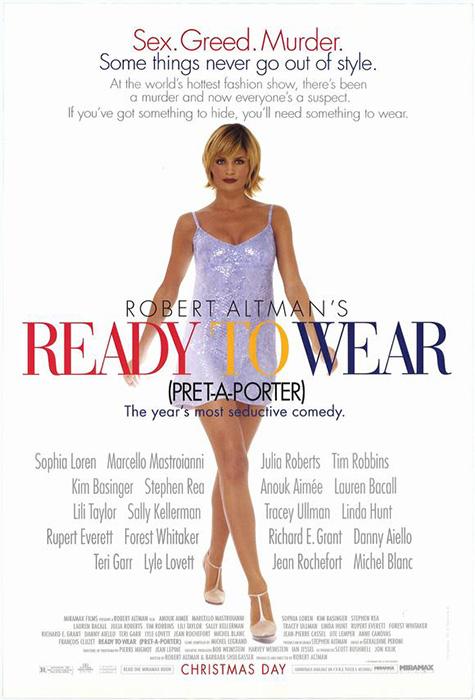 Ready to Wear was filmed during Paris Fashion Week in the spring of 1994, when the Fashion Council president was mysteriously killed in a car accident. Sophia Loren and Marcello Mastroianni, two of Italy’s greatest cinematic stars, star in the film.

Eddie (Richard Anconina) is desperate for work, so he accepts a job at American Dream, a textile manufacturer based in Paris’ Sentier area. However, it was Eddie’s belief that he was Jewish that resulted in him being hired. Is the truth going to emerge?