Filmmakers Quentin Tarantino and Robert Rodriguez are to be credited for popularizing grindhouse movies. Machete and Hobo with a Shotgun, two full-length films based on the bogus trailers in Grindhouse, have since been released (and Eli Roth is still entertaining a Thanksgiving movie). Featuring Danny Trejo as a former Federale who now works for the U.S. government, Rodriguez’s sequel to his Mexploitation action thriller, Machete Kills, will release in theaters this weekend. We’ve compiled a list of some of the best grindhouse films to get you in the mood for machine gun bras and eccentric billionaire terrorists (played by Mel Gibson). Experience the best of grindhouse cinema on a 15-film retrospective at filthy 42nd Street. Don Edmonds’ Nazi sexploitation favorite, Ilsa: She Wolf of the SS, takes place in a medical camp where Dyanne Thorne’s cruel commandant is experimenting on inmates to prove that women can bear greater suffering than males. When she’s not pretending to be a doctor, Ilsa enjoys torturing her employees and having sex with them at any cost. To put it gently, those who fail to please her end up as half-men. A good time for Ilsa may not be for the faint of heart, as there is plenty of gore, nudity, and twisted humor to enjoy. The vicious Ilsa can be found in Ilsa: The Wicked Warden, Ilsa: The Harem Keeper of the Oil Sheiks, and Ilsa: The Tigress of Siberia if you so desire.

Pam Grier was a grindhouse diva in Jack Hill’s blaxploitation classic, Coffy, before she starred in Tarantino’s Jackie Brown. At night, she transforms from nurse to avenging angel and takes on pimps, drug pushers, crooked police officers, and mafia bosses with a sawed-off shotgun and a pair of razor blades in her afro. Grier’s sex appeal is undeniable, but she’s also a fearless badass. To put it another way, unlike other exploitation films, Grier does her own stunts and has true acting ability.

3. Master of the Flying Guillotine “Flying Guillotine” in Master of the Flying Guillotine is undoubtedly the coolest weapon in kung fu films (which looks like a hat with a bladed rim). Besides the Indian fighter, the rest of the film is populated by one-armed men—except for a blind assassin wielding the weapon. Moreover, Tarantino is an admirer of the film’s action-based lunacy and wacky cast members.

4. The Last House on the Left

In the annals of grindhouse horror, Wes Craven’s Last House on the Left has earned its place in the record books. If you’re looking for more in-depth subtext, Craven provides in his meditation on the evil inherent in all of humanity. (For first-timers, the repulsive exterior may be difficult to see, but it’s there.) A trio of vicious thugs brutally assault two young women as they enjoy a night out on the town. There’s not much more to the story (apart from a few inadvertent comedic moments), but director Wes Craven didn’t intend for the film to glorify violence. Craven’s first film, inspired by Ingmar Bergman’s The Virgin Spring, is shot like a documentary, giving it a horrifying reality.

As well as Bruce Lee’s Enter the Dragon, Five Fingers of Death is responsible for a kung-fu craze that swept North America in the 1970s. There are many similarities between this film and Quentin Tarantino’s Kill Bill (1972), especially in the music and battle choreography. You can see Paul Schrader before he worked with Lindsay Lohan on The Canyons, in 1977’s Rolling Thunder if you want to know what he was up to before Taxi Driver (scripted by Schrader). Tom Jones and William Devane, both in their early twenties, star as two POWs on the run from a band of violent gangsters. Rolling Thunder is a post-Vietnam period piece with lots of brutality, but it’s not your average grindhouse film, thanks to the excellent screenplay, direction, and performance of the cast and crew of the film.

7. Race with the Devil

See Peter Fonda pursued by a savage motorcycle cult after seeing their human sacrifice in this action-horror film that mixes occult horror and chase sequences.

One of the most well-known films on our list, Russ Meyer’s classic about a girl gang features three former go-go dancers who become ultraviolent vixens who abduct, kill, and lustily seduce men to their deaths. Even if you strip away the humor, the elaborate camera angles, the violence, the action, and of course the sex, you’re left with the classic image of a towering woman with enormous breasts who commands the attention of the men around her, demands sexual satisfaction, and ultimately discards them in the same manner that men do in mainstream sexual fantasies. 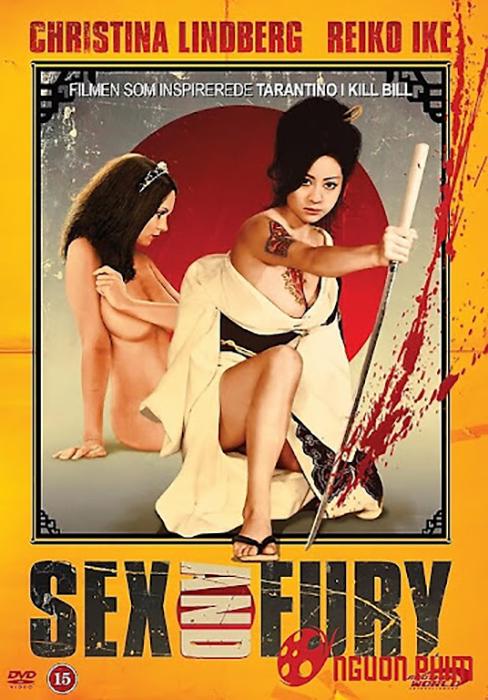 Another Tarantino masterpiece: Kill Bill’s tribute to Sex & Fury by Noribumi Suzuki (see: the final sword fight between The Bride and O-Ren). In contrast to the majority of 1970s sex exploitation films, Sex & Fury follows a female bounty hunter (who, yes, sometimes fights topless) as she goes on the prowl for a gang of criminals.

Ruggero Deodato’s Cannibal Holocaust is controversial because of the on-screen killing of animals (which the filmmaker has since expressed sorrow about). However, it is the only picture in which the hype of “The Most Controversial Movie Ever Made!” can be believed in its full extent. For all of the ham-fisted social commentary in the infamous grindhouse thriller about a bunch of documentary film makers disappearing into the Amazon and the professor investigating what atrocities occurred, Deodato makes us briefly question who the real monsters are: us or cannibals. Finally, a stomach-churning Italian horror film that put the filmmaker on trial because the courts were certain they were witnessing a real snuff film in the final fifteen minutes of the movie Make sure you’re well-equipped before venturing into the wild. Holocaust of the Cannibals is not a game for the faint-of-heart.

The films of Lucio Fulci were made for the grindhouse. Fulci’s New York Ripper was gory, nasty, and downright sleazy, with sequences set in seedy movie theaters where pornography flickered on the huge screen. One of Hell’s seven gates sits atop a New Orleans hotel where the Beyond takes place. This film is filled with outlandish gore and absurdities, such as tarantulas that devour people’s faces, a blind woman who is viciously assaulted by her guide dog, cult actor David Warbeck running around shooting zombies everywhere but the head, and a guest appearance by Lucio Fulci. Inspired by the musical Brigadoon, Herschell Gordon Lewis, aka the Godfather of Gore, set his film Two Thousand Maniacs! in the American South, where tourists and locals are pitted against each other in a bloody war to the death. It wasn’t until Lewis’ “nudie cutie” pictures and one of the films that helped birth the gore genre, Blood Feast, that the term “grindhouse” was coined.

Christina Lindberg, a sexploitation starlet, portrays a lady who was beaten and forced into prostitution after her attackers pushed her into a life of drugs and prostitution. Lindberg’s character has an eye patch, a shotgun, and black leather in his arsenal. The film’s director, Bo Arne Vibenius, used hardcore pornography to sleaze things up. The makers of the film had to take out a life insurance policy on Lindberg because they utilized actual bullets in the action portions of the movie. For a particularly graphic scene, they incorporated a genuine body.

Jonathan Demme from Philadelphia and Silence of the Lambs fame produced this great picture about women in jail under the direction of Roger Corman. However, despite the film’s premiere at a time when female criminals banded together against a merciless warden, the story remains popular. With its bleak New York City backdrop and disturbing tale of a lunatic stalking and sleeping with his mannequin collection while occasionally scalping female victims, William Lustig is the perfect example of 1980s horror. The role of psycho Frank Zito was played by actor Joe Spinell, who created a terrifyingly real persona that was out of character for the era. VFX legend Tom Savini contributes an exploding-head effect (he used his own as the model). Michael Sembello, the musician who originally co-wrote Flashdance’s “Maniac” for Lustig’s movie, is the weirdest Maniac trivia. When asked about his partnership with co-author Dennis Matkosky, the singer said the following:

What he came up with was an idea and a groove that he passed on to me. The words for the chorus he came up with, I believe, included: “He’s crazy, crazy for sure/ He will kill your cat and nail him to the door.”” Because that direction wasn’t working, producer Phil Ramone stepped in and asked that we modify it to our current notion of a lady who is possessed with a desire for dance, which is what we ended up doing. It wouldn’t have happened without Phil’s help.”