Anime has given rise to a number of memorable characters. Anime fans and non-fans alike have come to know and love these iconic women.

Male anime characters are far too frequently mentioned while discussing the genre.

After all, male characters are more likely to serve as the series’ principal protagonists and villains, making the conflict surrounding them the only thing that matters at the series’ conclusion.

But there are a lot of great female characters in anime, and they’re not just from programs geared toward women. It’s common for anime to feature strong female protagonists, and these characters are often integral to the overall success of the show. Some of them are protagonists, while others are so vital that, even if they aren’t the main character, the entire series would be incomplete without them. In the original Sword Art Online series, Asuna is a co-protagonist. Unlike Kirito, who is a steadfast lone wolf, Asuna is an integral part of the Knights of Blood guild, the most powerful in the game’s universe. Despite her flaws, Asuna consistently demonstrates herself to be just as capable as Kirito, always standing by his side when the latter finds himself in over his head. “SAO” is a virtual world where the two of them fall in love and get married, a romance that continues after Kirito saves her in real life.

2. Usagi Tsukino Is Relatable And One Of The Most Powerful Protagonists Ever As The Moon Princess (Sailor Moon)

Sailor Moon is one of the most recognizable anime of the 1990s because it was so different from anything else on the market at the time. People had never seen anything like Usagi, a character they’d never seen before. Usagi isn’t the most gifted, smart, or dangerous combatant. As a result of her laziness and poor academic performance, she’s been labeled a klutz. However, she still defends her companions and is ready to face down the great evil of Queen Beryl and her army.

3. Misato Is The Most Relatable Character In Evangelion (Neon Genesis Evangelion) From Evangelion, Misato is the character that most fans relate with. When they’re not piloting huge robots for the sake of the Earth, Shinji and Asuka have a place to call home in NERV, which she helps run.

The contrast between her professional demeanor at work and her personal life is what makes her so compelling as a character. In her downtime, she drinks heavily and rarely has time to tidy her home.

4. Saber Is The Face Of The Fate Franchise (Fate/Stay Night)

The idea of “turning King Arthur into a woman” spawned a whole series. Saber is still a big element of the Fate franchise, despite the fact that there is a lot more going on these days. It’s clear that Saber is a lady who feels like she’s bigger than life because of the enormous obligations that she carries. She’s still a person, though. To live up to her responsibilities as king, she had to deny herself the pleasures and wants that came with her human nature. Because she’s such a deadly combatant, she’s featured in two of the franchise’s series, which is why she’s so important.

5. Bulma Is The Smartest Character In The Dragon Ball Universe (Dragon Ball) To talk about Dragon Ball without mentioning Bulma is to miss the point of the series. Her journey to find the Dragon Balls is the beginning of the entire saga. She teamed up with Goku and Yamcha against Emperor Pilaf for the majority of the first story arc. She’s one of the richest and most powerful persons in the Dragon Ball universe, having inherited her wealth from her father, the founder of Capsule Corp. In addition, she’s a genius, and the Cell Saga would have come to a disastrous conclusion if not for her ability to travel back in time.

She is one of the characters of Code Geass and gives Lelouch his Geass powers at the beginning of the series. It’s fun to see her do whatever she wants, as if she doesn’t care about what’s going on around her. For her own amusement, she helps Lelouch with his task by pretending to be Zero. In the meantime, she’s content to observe and laugh at Lelouch’s meticulous planning.

7. Kagome Is The Most Iconic Female Protagonist Of The 2000s (Inuyasha) It was Kagome who was the most popular anime character on television in the early 2000s. On top of that, Kagome’s life is the ultimate experience. Kikyo, an old priestess, is reincarnated as a reincarnated version of herself in an alternate world.

Inuyasha, a handsome ancient half-human, half-demon kid, is revealed to be her distant cousin. Not only does she have Inuyasha to protect her throughout the shikon diamond restoration quest, but she has access to a spell to keep him in line whenever she wishes.

8. Haruhi Had Everyone Wanting To Dance When Her Show Premiered (The Melancholy Of Haruhi Suzumiya)

SOS Brigade is a group of first-year high school students who are constantly on the lookout for supernatural events of all kinds. Haruhi Suzumiya is the group’s commander. It turns out that even though she’s supposed to be in a universe that doesn’t contain any of these things, Haruhi can unconsciously alter reality as she sees fit. Even though Haruhi is a protagonist, she is unusually self-centered, doing what she wants even if it means making others uncomfortable. Just look at the number of people who have tried to master the dance from the show’s closing credits if you question her iconic status.

9. Fujiko Is The Only Woman Who Could Outsmart Lupin (Lupin III) 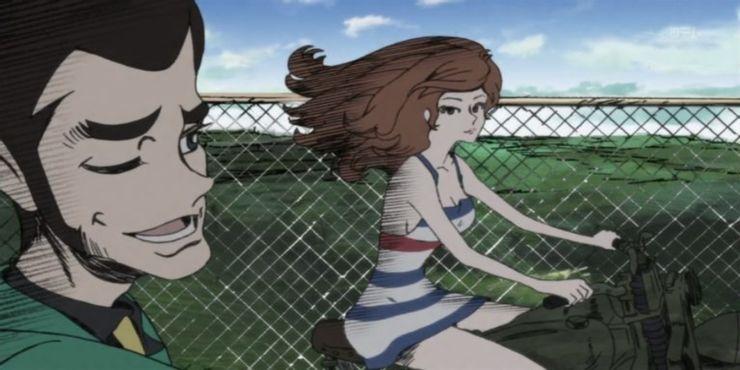 Fujiko Mine, the ultimate femme fatale, is the ideal foil for Lupin the III, the famed gentleman thief. Fujiko, on the other hand, is an exception to the rule when it comes to older series’ love interests. She often works with the group as a member of the gang. Whenever she isn’t, she’s working against them. When it comes to outsmarting Lupin, she’s one of the few people who isn’t hesitant to use the power of her looks.

10. Motoko Kusanagi Is The Field Leader Of Section 9 (Ghost in the Shell)

Motoko Kusanagi, also known as “Major,” is a member of Section 9, a police team tasked with combating the rising tide of cybercrime. One of the earliest anime films to have a significant cultural impact in the United States was Ghost in the Shell, released in 1995.

Scarlett Johansson starred in a live-action film based on this series, which became a huge hit in the West and produced several spinoffs, including the Stand Alone Complex and Arise series. Her toughness and secretive attitude have made her one of anime’s best and most well-known female heroes.