In the past, there has been a rocky relationship between anime and black characters. The last four decades have seen a resurgence in anime with strong and memorable black protagonists.

And they haven’t just been used as jokes or cameo appearances. To compile this list, we looked at ten of the most iconic black anime characters over the course of several decades, so some of the characters on this list may be from series that are decades older than usual. See what we can find! 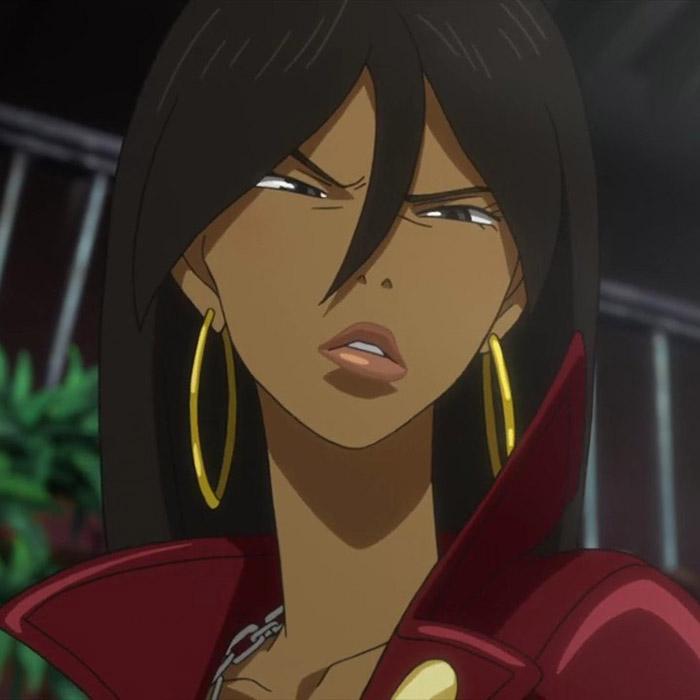 When it comes to Michiko and Hatchin, she is the fiery adult to her kid partner’s more restrained demeanor. Styled after R&B artist Aaliyah, she’s an Afro-Latina. When we first meet her, she’s on her way to Hiroshi Morenos, the man she’s been searching for her entire life.

So far Michiko has been credited for being essentially the only black female protagonist in this series. It doesn’t matter who you are or what you’re doing; she’ll handle it all with aplomb.

Souichiro Nagi, a childhood buddy of Bob’s from elementary school, is also a student at Toudou Academy. In their initial arrogance, the two of them assume they can easily defeat Toudou, only to have their confidence dashed by students who aren’t even among the most powerful in the school.

People later on come to appreciate Bob’s extraordinary strength and his capoeira talents, which allow him to sync up with the rhythm of the fight. The manga gives him his due, establishing him as one of the strongest characters in the series, even though the anime finally loses him a bit. Claudia LaSalle will be forgotten by the next generation of fans. We’ve never had a chance to see a pure Macross licensed in the United States because of Robotech.

The bridge operator in the original Macross series is Claudia LaSalle. If you don’t know her, you might be surprised to learn just how much of an influence she has on how well things function on board the spaceship, even if she doesn’t appear to be a major player in the series itself.

Killer Bee is a favorite of many. Killer B, a Kumogakure member, is noteworthy not only because he is the host of the Eight-Tails, but also because he has managed to form a bond with the Tailed Beast. Because of this, he is only surpassed by Naruto in terms of power control…maybe.

With his unusual wrestling fighting style, connection to his tailed beast, and swordsmanship, he’s one of the most intriguing shinobi in the ninja world. He’s also one of the greatest ninjas in his community, so he has plenty of time to come up with witty rhymes. Of course, there’s room for a villain in this story as well. No one had seen anything yet that would make Pegasus seem threatening. It wasn’t long before he was playing kid games like Viewmasters and Betamax tapes, ensnaring people’s family. Marik was attempting to murder Yugi in order to exact revenge on the Pharoah for his hard upbringing.

With his amazing Infinite Card Ra approach, he came the closest to beating Yugi legitimately and nearly killed Joey twice. By indoctrinating him first, and then subjecting him to a Shadow Duel with Ra’s energy to test his resolve.

She is a teenage orphan living in Alba City on Mars, one of the main protagonists of the novel Carole and Tuesday. Until she meets Tuesday, she does a number of jobs that never seem to go well because she refuses to accept any garbage from her customers or employers. She’s a hero before she even begins working with her musical partner.

Even better, Carole never loses up on her aspirations despite living in a slum. She spends her free time working on her music and performs in front of a live audience whenever she can. Gundam Build Fighters’ Nils is like a secret code. His parents are both well-known, but he’s managed to outdo them both by receiving three Ph.D.s. in the process. When the series first introduces him, he’s only 12 years old. Sei and Reiji, using their Sengoku Astray Gundam, demonstrate him the thrill of Gunpla, even when he loses.

It’s still unclear what he can do when he reappears in Gundam Build Fighters Try. When it comes to Plavsky Particles, which make Gunpla run, he thinks he has an unfair advantage because he knows so much about them.

Canary, who appeared in only a few episodes of Hunter x Hunter, is nonetheless deserving of our admiration. In this universe, she is supposed to be an apprentice butler for the Zoldycks, a family of the world’s most lethal killers. Even though she’s only an apprentice, she has no difficulty berating Gon.

Even though Gon isn’t the typical shonen hero who rises above the odds, he was good enough to earn a license from Hunter…and Canary was strong enough that it didn’t matter. But she’s also kind, and her devotion to Killua takes precedence over her ties to the Zoldycks. Anyone who doesn’t like Yoruichi is a loser. First woman to lead her clan, she went on to become one of Gotei 13 most powerful Captains. She is one of the four noble families of Soul Society. In spite of nearly a century out of practice, Yoruichi can keep up with many of the present era’s heavyweights.

Known as the Flash Goddess, she has also been known to wipe out entire squadrons in a matter of seconds with her Flash Step ability. Even after a century, her lieutenant could not keep up with her might.

There’s no way he missed this list, right? Afro Samurai, a character created by Takashi Okazaki for a manga series, is a chill dude. After all, wearing the Number 2 headband denotes your status as the world’s second-best swordsman and your willingness to face off against the Number 1 in a fight to the death. But only if you can withstand the continual competition from other fighters.

Afro Samurai, starring actor Sam Jackson, is a hip-hop-loving, slick-fighting anime that also features one of the best swordsmen in anime history.