Anime doesn’t have many characters with bald heads. In this collection, you’ll find some of the best that have fallen by the wayside throughout the years.

Characters with bald heads are a rarity in anime. Because of the lack of older characters in anime, this is a good place to start. This is due to the fact that most shows feature teenagers whose parents are missing from their life for unknown reasons. For the most part, the shows that feature bald characters tend to fall into one of two categories.

The first is the wise old man or teacher, whereas the second is the sarcastic joker or jokester. Bald anime characters that aren’t clichés are hard to come across, yet they do exist. There are several anime characters who are completely bald, and many of them have been overlooked by fans.

1. Keith Shadis From Attack on Titan 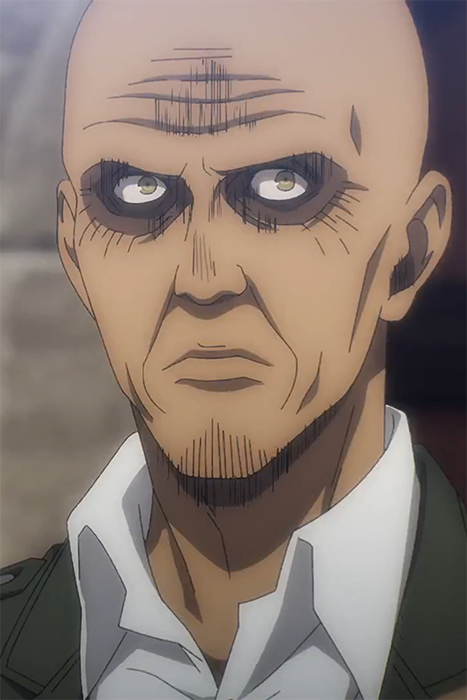 Since there are so many characters in Attack on Titan, it’s reasonable that those that get little screen time, like Keith, get overlooked by the general public.

When you consider that he didn’t accomplish anything extraordinary that would make him stand out in the eyes of fans, this is much more of an issue

Keith, the lone Survey Corps Commander who resigned, was a stickler for procedure. His subordinates feared him and obeyed him at all costs. As a result, he was despised by all of them.

Hellsing’s main villain is this vampire. No regret is shown by him for any of his deeds, and he takes delight in hurting, torturing, or killing others. Vampires that are not pure are created by him and his FREAK gadget.

This masochistic vampire, despite his cruel instincts, is ironically a sadist. When Alucard wounded him, he stated that he enjoyed the sensation of agony. Under normal conditions, Gluttony appears to be a very calm character. He’s usually by Lust’s side, but he can be spotted losing his cool from time to time. In these situations, he is more likely to eat anything that comes his way.

He does not appreciate eating, torturing, or playing with humans, unlike his siblings. As a matter of fact, it is strongly implied that he does not even know that the individuals he consumes die.

Bob is depicted as a boisterous yet cheerful character who is frequently seen with attractive men. He enjoys making out with them and doesn’t seem to care that he’s making them uncomfortable.

As the Guild Master of the Blue Pegasus Guild, he demonstrates a strong moral compass. When he expresses his disdain for Mages abusing their powers, this is evident.

5. Dot Pixis From Attack On Titan Attack on Titan’s yet another bald character makes it onto this list. There are very few characters in the entire series that can retain their composure when everything around them is burning to a crisp, and Pixis is no exception.

He’s well-known among his coworkers for his outlandish antics. When he says he wouldn’t mind being a Titan’s supper if the Titan was attractive, this is an indication of his character.

Despite having a humanoid face, Kamaj’s physique is more like that of a spider. As the manager of the Bathhouse’s boiler room, he makes good use of his six long arms. When he first meets her, he gives her the cold shoulder.

It doesn’t take long before he warms up to her and even starts telling her things that aren’t true in order to keep her safe. In addition, because he is Chihiro’s best friend, he also tends to Haku’s injuries. Agil, a Sword Art Online character with a cheerful demeanor, was both likeable and forgettable. The way he helped Kirito and the individuals stuck on the lower levels shows that he always goes above and beyond to aid others.

He is a businessman who runs a store on Aincrad’s 50th floor. To help others advance in the game, most of the money that he makes goes to him.

According to his demeanor, Jet is a smart and mature old man. Additionally, his forbearance serves as a good counterpoint to Spike Spiegel’s impetuous and unrehearsed demeanor.

His heart is in the right place despite his unpolished façade (he can appear unpleasant). He also has a strong attachment to his shipmates, whom he regards as members of his family. Shonen fans have hailed Baki as one of the best fighting series they’ve ever seen, despite its relative youth. Shinshinkai Karate’s owner and founder, Doppo, appears in the show. He’s a clever, strong, and immensely self-assured individual.

Doppo has a softer side that few people know about, despite his Tiger Killer moniker. Whenever his wife is concerned about his safety, he softly promises her that he will change his champion belt into a beautiful piece of jewelry just for her.

Hanzo is prone to outbursts of rage despite his ninja upbringing. In his overconfidence, he unwittingly provides information to his adversaries and enemies alike.

Hanzo may be shockingly callous at times, as demonstrated by his willingness to torture Gon. As a positive note, he is shown to feel remorse and sympathy for his opponents when he throws matches, such as when Gon admits he doesn’t hate him.