These Anime Like Tokyo Ghoul Will Satisfy Your Horror-Action Anime Cravings!

I have no choice but to feed your insatiable appetite for more anime like Tokyo Ghoul, seeing as you are currently as ravenous as a binge-eating ghoul. After all, that’s why I compiled this document in the first place!

You name it: action, horror, mystery, or thriller! Tokyo Ghoul shares some of its themes with other anime series. It’s time to get started, then. You have complete access to the entire library of horror-action anime. It’s time for dinner!

Unfortunately for Kaneki Ken, his life is forever altered when the two meet by chance and unintentionally become acquainted with a ghoul. His human existence may be coming to an end, and he’ll have to make do with being half-human and half-ghoul from now on. He’ll have to adapt to his new environment as the tumultuous world of humans and ghouls heats up to a boiling point. Humanity has yet to discover a significant portion of the universe or even our own planet. No one can say for sure if there are any other kinds of living things out there besides the ones we already know about. Aliens, or life from beyond our solar system, may or may not exist. But can we really say we’re ready for these so-called aliens when they suddenly appear in front of us?

As described in Parasyte: The Maxim, the story of the invasion of Earth by “parasyte”-like alien creatures is told in Kiseijuu: Sei no Kakuritsu. A parasyte infiltrates the brain of 17-year-old Izumi Shinichi while he is sleeping and attempts to take over his body. While Shinichi was listening to music through earphones, parasyte pierces his arm instead of his brain.

Parasyte and Shinichi have a mutual relationship from that point on; the parasyte has to work and sync with him in order to have an arm of its own. So far, Shinichi and Migi have been forced to fight other parasytes in an attempt to save other humans from a brutal invasion by the aliens, which is why they’ve been renamed Migi.

There is a new threat on the horizon that will bring destruction and despair to the world. They’re just like the cockroaches we call vermin, crawling around in every dark corner. It is only now that they have mutated and become fully committed to the destruction of all humankind.

Humanity’s plans to conquer Mars and turn it into a habitable planet began in earnest in the early 1970s. Because of this, they begin by sending cockroaches and moss to jumpstart the ecosystem and environment. Things appear to be going well until a sudden change in direction occurs.

With the situation as dire as it is, the Earth sends elite warriors to Mars to annihilate all the monsters and retake the planet. Cockroaches are both power- and number-driven, so things aren’t as easy to deal with as they appear.

3. Shigeki no Kyojin (Attack on Titan) On a single day in human history, a new kind of fear begins to take shape and causes people to descend into a state of despair. That fear is the fear of the titans, which are enormous, cannibalistic monsters who know nothing but their hunger for human flesh. Nobody knows where they came from, but everything takes place within the safe confines of humanity’s survival.

There is chaos and destruction in the city after the sudden appearance of the gigantic and armored titans. As long as the titans are in control, residents are at their mercy. Witnessing his mother being devoured by a titan, Eren Jaeger, a young boy who lives nearby, is horrified. As one of the few survivors, Eren prepares to fight and swears vengeance on the titans of the world.

When it’s time, it is! It’s time to act! It’s time to retaliate and continue the assault on the Titans! Within the walls of the city, a secret that could solve all of humanity’s mysteries has been locked away for eons.

If we all live in the same society, how sure are we that it is what it appears to be? No, we can’t be sure that the shadows of our seemingly peaceful lives aren’t filled with dark secrets, lies, and deception. Let’s begin our search for the truth by visiting an amusement park dubbed Deadman Wonderland!

Having his entire class massacred by a mysterious red man, Igarashi Ganta finds himself in an unfair predicament. Deadman Wonderland becomes his new home for serving out his sentence as a wrongful convict.

Despite the fact that Deadman Wonderland is both a high-security prison and an amusement park, Ganta will soon discover that it is a place with darker secrets than what appears on the surface. Let’s not forget about the “demons” living among us after hearing about aliens, mutants, and titans. Some of you may have heard stories about exorcists and their efforts to exorcise evil demons from the world. That’s just the beginning!

On our plane, there are in fact two worlds. The two worlds are human and demon. Despite the fact that they are connected by just a single line, they are unable to communicate with each other. The demons, on the other hand, manage to get through. The demons found a way to interact with both the human and the supernatural worlds at the same time by taking possession of humans and everyday objects.

Satan, the most powerful demon in the demon world, devises a plan to conquer the human world through the use of this possession technique. In the human world, the goal is to create/produce a vessel (a child) strong enough to contain him and allow him to roam freely. Rin Okumura is Satan’s human-born child!

The question is whether or not Rin will follow through with his father’s plans. Alternatively, will he take the opposite path and prevent the demons from manifesting themselves in the real world? When he becomes an exorcist, the answer will become clear!

There are criminals (also known as evil humans) in every corner of our planet. There are, in fact, criminals everywhere, and it’s a widely accepted fact in our world. For as long as there are people on the planet, there are always going to be criminals.

It’s already possible to assess people using technology and generate results known as “Psycho Pass” in the future. Everything about someone’s mood, personality, and even their inclination can be found in the “Psycho Pass.” As a result, it becomes much easier to tell the difference between a criminal and a lawbreaker.

Psycho Pass is now being used by police officers in their line of work. When a certain “criminal mind” limit is reached, it is easier to apprehend criminals with this technology. After that, the suspect is immediately taken to a rehabilitation facility. The question is, is this a good way to live? Are we aiming for a utopian society? How useful and righteous is Psycho Pass really? 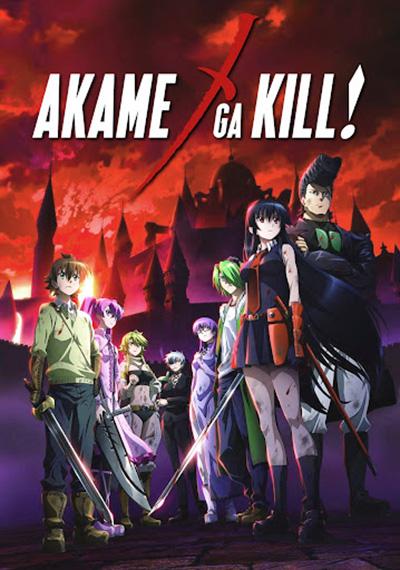 Since the beginning of time, the world has been corrupted and tainted, and a plague is destroying lives and causing anarchy. In terms of danger and evil, what is more dangerous than anything else? Our own species is to blame for this calamity! Our deepest fears and horrors are revealed in this groundbreaking story.

He is a warrior who works as a soldier in the capital to support his village and prevent it from falling into the hands of poverty. Corruption permeates every aspect of life in the capital, however. Tatsumi’s friends were almost killed by the darkness of the capital, and he stumbles upon the Night Raid assassins.

He joins “Night Raid” in order to restore peace and restore things to their proper order after his eyes were opened to the truth of the world. With the help of his new team of assassins, he sets out to rid the capital of evil and bring about a revolution that will bring down a corrupt minister.

A new species of human appeared out of nowhere. They’re enigmatic, powerful, and eternal! The majority of their lives are shrouded in mystery. This has led everyone else to keep an eye on them as well. As for the name given to the new creatures by humanity, it is simply—Ajin!

The Ajin are being sought out by society in the present day. The Ajin have become a target of study and research, either for research or personal reasons. Due to this, some Ajin are on the run or hiding. What about the rest? To ensure their own survival, they’ve embarked on this bloody journey!

Kei Nagai, a high school student, is an Ajin. He’s taken aback and surprised by the news. He didn’t even know he was an Ajin at the time! In the aftermath of a horrific accident, he discovered his true self. As a result, he is now an Ajin, and he is no longer able to live as a normal human. Ten years after the catastrophic event caused by the “Apocalypse Virus,” Japan has entered a post-apocalyptic state. Consequently, Japan’s authority has been weakened. GHQ, an independent military force, has taken control of the country and is tasked with maintaining peace and order. GHQ’s rule has resulted in the formation of rebel alliances determined to reclaim what is rightfully theirs.

Funeral Parlor is one of the most well-known rebel organizations. A civilian student is dragged into a situation involving the escape of a key member of Funeral Parlor, Inori Yuzuriha, from a facility. The student’s name is Shuu Ouma, and meeting Inori changed his life forever.

As a result of his encounter with Inori, Shuu has been granted the “Power of Kings.” The void in people’s hearts can be used as weapons and tools thanks to this mysterious power. With this newfound power, he has become a part of a much larger event—an event that will soon determine the future of the entire world.

His health is deteriorating at an alarming rate, and he intends to appoint a successor. It’s not as simple as it sounds to find a worthy successor! What will the world look like in the future if a survival game is used to choose a new god of space and time?

The deadly survival game has selected twelve participants. It’s up to them to use their wits, skills, and the “Future Diary” that was given to them to survive. For each participant, the future diary provides an opportunity to see the future in a unique and personal way. Who will be the new god of space and time in the end, and who will die?

There is a notable middle school student, Amano Yukiteru. Is this the first time he’s ever had to fight to the death? That’s what he’s hoping for. He has no other choice. It’s either you or the enemy! Is this the beginning of a new diary survival game?