It’s the story of Souma Yukihira, 15, who dreams of one day running his family’s restaurant as its head chef. Shokugeki no Soma (Food Wars) follows this story. The Yukihira Diner family restaurant was at first his only goal, but his father convinced him to enroll in Tootsuki Culinary Academy, the most prestigious culinary school in Japan, where only 10% of students graduate! It’s a challenge accepted by Souma! If you want to be one of the best chefs in the world no matter how difficult or extreme the circumstances, you’ll have to put up with it! Consequently, Souma’s desire to learn everything about food and cooking and become a world-class chef grew into a much more grandiose goal.

As you may have guessed, this anime is all about food! As a result, excessive salivation and drooling are to be expected. If you’re not prepared to get really hungry while watching this show, don’t bother! This is a show that will make you crave (what else?!) food! That’s why it’s a fantastic show. It also teaches you how to cook and prepare a wide variety of foods! Delectably phenomenal—what that’s I call it!

I’ve therefore chosen some series, no matter how insignificant they may be, that are consistent with Shokugeki no Souma’s genre and theme. You can drool all you want because they’re mainly about food, cooking, and ingredient-hunting. It’s time for some FOODGASM! Anime like Shokugeki no Souma are here to attack both the senses of sight and taste! Cooking Master Boy is one of the pioneers of cooking/food anime, no matter how old it may be. Many people may have had their first encounter with the genre as a result. In light of these facts, the attention it received in the past is understandable. It doesn’t disappoint as a cooking/food anime at all, in my opinion.

The “Era of the Cooking Wars” was at its peak in China during the reign of the Qing dynasty in the 19th century! In this time period, a young boy named Mao rises to prominence as a cook, following in the footsteps of his late mother, the “Fairy of Cuisine.” While on his travels through the country, Mao is intent on becoming a legendary chef of his own caliber through his study of Chinese cuisine.

Yakitate!! is the first anime to feature FOODGASM. Japan may be able to help you out! The word “foodgasm!” is perfectly embodied in this show. For this show has the ability to make viewers salivate and crave the food they see on screen (well in this case, BREAD). You’ll get to experience heavenly bread-tasting, orgasmic eating, and over-the-top after-taste expressions in this anime!

An ordinary kid isn’t what Azuma Kazuma is! The “Solar Hands” are a one-of-a-kind ability that he possesses. His hands are noticeably warmer than the average person’s. With this new bread-making ability, he has risen to a new level of mastery! Azuma was initially averse to bread. The discovery of bread and its making led him to embark on a quest to join “Pantasia” and create the legendary bread known as “Ja-Pan”!. Eat delicious food, or at least watch someone else eat, and you’ll get the same happy feeling. Well, not only will you enjoy the food served in Koufuku Graffiti, but you’ll also enjoy the show’s overall “feel good” vibe. As a slice-of-life/food anime, it’s worth looking forward to!

An art student at a high-end university, Ryou Machiko lives on her own. At home, she cooks her own meals, but they no longer taste good to her. Food is just food, why does it no longer taste as good as it used to?” Kirin, Ryou’s cousin, will be spending the weekends with her because she wants to attend the same art school as Ryou. As a result, Kirin discovers that taste isn’t everything after tasting Ryou’s cooking! “A good meal is meant to be shared with loved ones and close friends.” That’s what makes a meal good!

Toriko is all about the food! No matter how many battles there are, it’s all about food in the end! Everything is done for food’s sake!’ It’s a food adventure like no other: scouring the globe for rare and exotic ingredients, preparing them to perfection, and savoring the most delectable food on the planet! And for that reason, Toriko is a must-see anime!

Gourmet hunter Toriko is on a mission to create the perfect multi-course meal. Of course, it’s not an easy task! What an enormous challenge it is to procure and prepare the best ingredients possible in today’s world, where food is everything. It was Chef Komatsu’s job to track down Toriko for a very important assignment. In the blink of an eye, they became friends! A new adventure awaits them, one that will fulfill their dreams and put food at the heart of everything they do. As far as I’m aware, you’re a fan of reality television shows depicting people battling for food. No need to look any further, buddy! Ben-To is all about action, eating, and a whole lot more! Ben-To is all about food fights, no matter how strange the concept is! It’s as simple as not fighting and not eating. Go ahead and watch it, because that’s what you can expect!

In the words of 15-year old You Satou, “half-price ben-to boxes are sacred.” After initially trying to grab a ben-to box, he found himself lying unconscious on the ground! “What the fuck happened?” As it turns out, fighting for food, especially half-priced ben-to boxes, is a necessity. In order to become a true-blue “ben-to wolf warrior,” Satou begins training with the “Ice Queen” herself.

Are you a fan of sugary treats and savory snacks? Well, I’m sure you know that already. There is no doubt about it. Dagashi Kashi is a huge fan of snacks and sweets, and he enjoys them to the fullest! Because it’s a show about, you know, snacking, you should be familiar with the gist of it by now. The more you learn about dagashi (Japanese snacks), the more you’ll crave for them.

Manga artist Kokonotsu Shikada’s father wants him to take over the family snack business, Shikada Dagashi! And this, my friends, is where things get a little dicey! Kokonotsu, despite being extremely knowledgeable and passionate about the family business, does not want to take it over. That is, until Hotaru Shidare enters their sphere of influence! Hotaru has a mission: to get Kokonotsu’s father to join the Shidare Corporation, a massive snack company. When Hotaru convinces Kokonotsu to take over the Shikada Dagashi, his father has an idea: He will accept her request! A patissier, correct? Pastry chefs are known as patissiers, and they’re skilled at making desserts and other baked goods like breads and pastries. That being the case, you should now have a better idea of what Yume-iro Patissiere entails. Do you know that it’s all about baking and cooking desserts in the spirit of competition?

The only thing Ichigo Amano excels at is eating cakes. Her ultimate passion is, indeed, the consumption of cakes. She’s also a talented taster, but she didn’t know it at the time. As a result, Henri Lucas, a world-renowned patissier, becomes aware of her talent. St. Marie Academy, a prestigious dessert culinary school, offers Ichigo a once-in-a-lifetime opportunity.

What about talking about what food was before it became a part of our daily diet? As you may have guessed, food is a product of agriculture and the various processes that surround it. And this is what Gin no Saji’s theme is all about! It’s all about farming, faming, and farm life! In addition, we mustn’t forget about eating! Because farming and agriculture produce food.

As a young man, Yuugo Hachiken sought to escape the stress and pressure of his parents by enrolling at Ooezo Agricultural High School. He had no idea that his decision would have such a profound impact on his life. In spite of how confident he seemed, he clearly underestimated the importance of farming and agriculture! What he thought was simple and stress-free is actually very difficult and complicated.. So, he’s made up his mind that he’s going to take this seriously from now on. In the face of any obstacles, he’s going to go at them head-on and unflinchingly! “Farm life—all it’s over!” 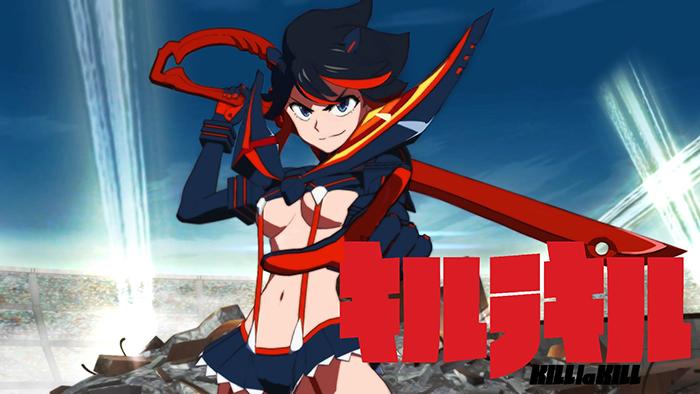 If you’re wondering, Kill la Kill doesn’t have any food in it. Because of the over-the-top fanservice and ostentatious ecchi, this episode is in this category. What anime has both of these features? Shokugeki no Soma, of course! Kill la Kill and Shokugeki no Soma are very similar in this regard!

There was only one murder that started it all—that of Ryuuko Matoi’s father. Onward to vengeance: Ryuuko’s journey begins now! Satsuki Kiryuuin, the ruthless student council president of Honnouji Academy, and her four henchmen, the Elite Four, are the only clues that point to the school’s location. However, is the murderer actually connected to the school? To get to the bottom of this mystery, Ryuuko must put up a fight! Ryuuko must take on Satsuki and the Elite Four in order to uncover the truth about her father’s death with the help of the Scissor Blade and the mysterious power-suit called Senketsu!

Then there’s this, too! Assassination Classroom (Ansatsu Kyoushitsu) was put here for a reason. That’s because I can see some similarities between the two. In this one, there is no “food” theme, but there is a “student struggle” theme! Students at this school, like those at Shokugeki no Soma, are engaged in a battle of epic proportions. In Shoukugeki no Soma, the goal is to graduate and become world-renowned chefs, while in Ansatsu Kyoushitsu, it is to kill the teacher and save the world. Oh, and I almost forgot—Ansatsu Kyoushitsu is incredibly funny!

The ultimate goal is to assassinate the teacher in one particular school. Koro-sensei, of course, is the teacher! He’s not your average teacher, either! In the end, we don’t know what he is, but he has a lot of tentacles and powerful abilities. A large portion of the moon has been demolished by him already. Because of this, he is now threatening global catastrophe if his students fail to eliminate him before they complete their studies. The fate of the world is in the hands of Koro-students, sensei’s so study, train, and become great scholarly assassins!