On the surface, discussing the Occult appears to be an insurmountable endeavor. Analyzing anything that is inherently concealed and hidden may be a fruitless endeavor at best, and a dishonest one at worst. Logic tells us to be wary of movies that purport to depict the occult when, in fact, they just reflect a portion of it. Nevertheless, certain films have been more successful than others over the years in their ability to captivate audiences.

In this article, we’ll take a look at some of the most popular occult films of all time, and see how they reflect the public’s image of the enigmatic realm. There are more entries on the list that capture authentic Occult lore but have to give an imperfect image due to their lack of completeness. Listen to these 5 masterpieces and see whether they have an effect on you. This cult classic British horror film is a true gem. “Casting the Runes” by M. R. James is the inspiration for this film. A film with the word “runes” in its title is bound to have a strong Occult vibe, and this one surpasses all expectations.

Night of the Demon does not waste any time in plunging headlong into the Gothic. When a professor begs a demon cult leader to lift the curse placed on him in exchange for ceasing to look into his organization’s sinister operations, the film’s opening shots show him begging. Dr. John Holden (played by Dana Andrews) assumes command of the investigation when the professor fails to show up at an academic convention.

It’s no surprise that Dr. Holden has no faith in the supernatural. However, his faith is put to the test when he comes face-to-face with the charismatic head of the cult. Night of the Demon establishes its Occult credentials with a subtle treatment of the subject matter, mostly eschewing overt magic. The legendary Jacques Tourneur directed this intriguing picture, which is a must-see for enthusiasts of occult horror. In The Devil Rides Out, the legendary actor Christopher Lee takes on the role of a hero, despite his reputation as a villain. A young woman has been taken by a Satanic group, and Lee portrays the Duc de Richleau, who is desperate to stop them from initiating her into their ranks.

There is a great deal of ritual magic in The Devil Rides Out, which can be utilized both for good and for evil purposes. When Lee’s character is able to fight on equal terms with the Satanic sect, a spell-fighting duel begins. One of the greatest occult horror films ever made, The Omen remains one of the best examples of its genre. The 1962 film Burn, Witch, Burn! also goes by the variant title Night of the Eagle. A script co-written by Charles Beaumont, Richard Matheson, and George Baxt seemed like a failsafe formula for success… Indeed, the picture lived up to the promise of its legendary authors, and an Occult classic was formed out of it.

Peter Wyngarde portrays a professor with a firm belief in the nonsense of magic spells and superstitions. He quickly discovers, however, that his own wife is a dedicated practitioner of ceremonial magic, and that this has been going on in their home for some time.

The professor, despite his wife’s claims that her magic is the reason for his professional success, refuses to give in to her claims and destroys all of her magical utensils. He must face the new facts before him and reevaluate his preconceptions as his fortunes shift. Burn, Witch, Burn! lives up to the title’s hypnotic allure. 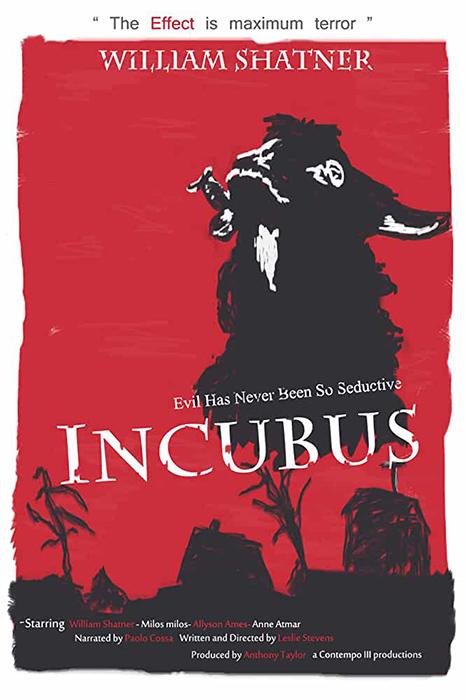 Incubus, a 1966 horror film, has a weird history and legacy to go along with its eerie tale. Featuring a young Williams Shatner in the lead role, Incubus was one of the first films ever made in Esperanto under the direction of Leslie Stevens (the man behind The Outer Limits). A “curse” is said to hang over the picture and those who worked on it, and the film itself was supposed to be lost for many years before its discovery. Thanks to modern technology, it is now possible to view the film.

The story takes place in a small community where the water from a nearby well is thought to have medicinal powers. One of the town’s wounded soldiers soon learns that the town is also home to demons and other evil entities.

With his life at stake, the conscientious teenager soon finds himself in a battle over the fate of both himself and his soul. Incubus has a haunting, otherworldly feel to it, and there are plenty of jump scares. Take a look at this forgotten gem that was saved from oblivion. On the list of all-time great Occult horror film casts is J. Lee Thompson’s Eye of the Devil (2001). There’s no way the writing would matter if it weren’t for the presence of actors like Deborah Kerr, Sharon Tate, David Hemmings, and Donald Pleasence. Fortunately, Eye of the Devil is endowed with a fascinating plot and engaging performances that keep us engaged from beginning to end.

To save a failing vineyard, billionaire landowner David Niven is summoned to one of his properties. He keeps a tight lid on his plans, refusing to invite his wife along or talk about how he came to own the property in the first place.

When his wife and children come despite his desires, they are met with unfriendly hosts and an unwelcoming atmosphere. When they arrive at an estate, a witch and her brother appear to be particularly determined to ruin their trip and drive them away. A surprise and a classic Occult adventure, Eye of the Devil is a must-see for every horror fan.