Since the beginning of the 1990s, individuals have finally found the “Pride” they were meant to feel. Rather than making decisions based on how others see us, true self-worth comes from being true to who we are and what we want. However, as far as I recall, it has only been a few years since the concept of “respect for all individuals” became widely known. Respecting everyone’s “Gender Identity,” regardless of their ethnicity, class, or any other characteristic. The anime industry has found a method to show appreciation for the LGBT population in light of the worldwide outcry for equality. Moreover, in my experience, they were pretty good in making people fall in love with a character regardless of the gender they identify with.

The most energizing thing an author has ever spoken about this subject in the anime industry. During an interview with Isayama Hajime, he remarked that “any of the character’s gender has nothing to do with the plot,” and he didn’t want to clarify because he didn’t think it was relevant. There are even authors who appear to be consistent in concealing the genders of their characters. A social message to anime fans and the rest of the world is what we call this: if we can love a character without regard to gender, we can also love a human. For this reason, I’d want to offer a few gender neutral characters from various anime shows as a way of honoring the “Pride” community we have here.

Gender-Neutral characters are those who are neither masculine nor female. They may be labeled as “X-Gender” or “not categorized” depending on the context. The following is a list of ten anime characters who are neither male nor female, drawn from a variety of series. Non-binary characters abound, however this article will focus on just 10 of the most notable, owing to the impossibility of including them all. In the future, we may add more works on the subject, including those with Gender Neutral characters in addition to those we’ve already met. Let’s get started now.. 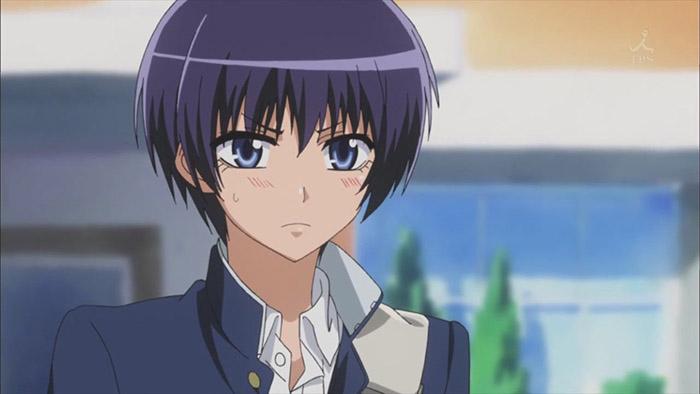 The maid cafe is owned by Aoi Hyoudou, a character from the anime series “Maid Sama.” Cross-dressing is a well-known trait of the character. In Aoi’s opinion, cuteness is a virtue, and she is a fan of all things adorable. As a result, they often become the center of attention, capturing nearly all of the viewers’ attention. Aoi’s remarkable cuteness is often used to play with the feelings of boys in the series, but Misaki always catches her in the act. Aoi has a reputation for being irritable and lacking in patience. Aoi’s fathers threw him out of the house because they didn’t like him dressed as a woman, and you’ll see that scene in the series.

It’s Gugure character Inugami, from the series! One of the series’ most memorable characters is Kokkuri-San Seiyuu. The second ghost to begin haunting Kohina Ichimatsu was Inugami. Inugami and Kohina’s relationship has been strained by the presence of Kokkuri-san, who they consider a stumbling block to their romance. When they think of Kohina, they get a nosebleed, which makes them a pervert. To sum up Inugami’s character, they despise Kokkuri-san and have a book full of reasons for him to be killed. However, except from that, Inugami despises everyone and everything, save for Kohina. Inugami has a lot to gripe about in the series, so expect to see it. Nathan Seymour, the most sassy character on this list, isn’t very well-liked, but it’s easy to see why. In addition to being recognized as the Fire Emblem, Nathan is a member of the Tiger and Bunny anime and manga cast. They casually hit male horses with their swords, which is an impressive feat for a warrior. Nathan’s standout feature is their dazzling appearance, which makes them stand out from the crowd. You’ll get to see Nathan flirting with male heroes, stating, “I’ll give you a kiss when you get back.”. The majority of the male characters in the series are shown to be flirting with them at some point. They have a strong sense of self-worth, enjoy all things girly, and have a slew of adorable stuffed animals. It’s their manly aspect that makes an opponent shudder when they’re up against an opponent.

Isayama Hajime’s brilliant work, which has been well commended for focusing on this fantastic principle of genre neutrality. Attack and Titan’s most popular character, Hange Zoe, is also one of the most beloved. They have a reputation as titan maniacs and have driven experts insane with their quest to learn everything there is to know about titans. Scout Regiment’s current and 14th commanders are these individuals. In terms of battle and strategy, Hange has a lot of experience. As Scout Regiment’s master analytic until Armin entered the picture, they became known as the brilliant team of Scout Regiment. As we saw when Beane and Sawney were slaughtered by intruders, Hajime claims that Hange might be considered the scariest figure when enraged. The Demon Sword and the Soul Eater character Crona are both well-known. These demon-sword wielding children of Medusa Gorgan grow up to be Ragnarok’s meister partner. Despite his introversion and lack of self-esteem, Crona is frequently seen following orders. It is because they are Medusa’s children that they have a terrible aura and are often meek and harassed by Ragnarok. Crona has a reputation for being unstable, which makes them a formidable adversary. It is common to see them go insane as they succumb to lunacy in most confrontations.

You should be wary of this lovely silver-blonde person before approaching. Tsugumi Aozaora, a character from the anime Asobi Asobase, is shown here. When it comes to the other male characters in the series, they tend to fall in love with these women because of their enchanting femininity. Tsugumi has presented themselves as a female in front of their classmates, although they have also been accused of being a man at other points. They, on the other hand, prefer to remain anonymous and enjoy teasing the other members of the club. Tsugumi has a very ambitious nature, and we see this in their use of bribery and blackmail in Student Council quite a bit. Character Grell Sutcliff, a well-known Grim Reaper from the Black Butler television series, is well-known. They belong to the Grim Reaper Dispatch’s Retrieval Division. Grell is a fiery and opinionated individual who relishes the opportunity to express their true feelings. Red is their go-to color, and you’ll see them donning it virtually nonstop. Grelle has a reputation for being a fierce and impulsive opponent due to his or her short fuse. Another characteristic of their character is a lack of patience and a tendency to be emotionally driven and harsh when the situation calls for it.

Wandering Son’s main character. Fifth-grader Shuichi Nitori attends a public elementary school. It was discovered later that Shuichi had a wish to turn female, and the new student rapidly became friends with everyone. Even though he was raised to look and act like a lady, Shuichi was born a boy and has always preferred to present himself as a female in public. When Shuichi goes out, he likes to dress up as a girl and he has a feminine charm about him. Shuichi’s friends Yoshino Takatsuki and Saori Chiba encourage them to pursue their interests, unlike many other characters. As they enjoy dressing up in cute costumes and participating in more feminine activities, they are content with who they are. Naruto’s Orochimaru is one of the most well-known anime characters. The Sannin of Konohagakure are well-known. They are motivated by a desire to discover the world’s greatest mystery. In the beginning, they were the show’s main antagonists and appeared in several arcs of the series. As he chases immortality, Orochimaru has even been convicted of conducting unethical research. Orochimaru was one of the series’ most beloved characters despite their evil crimes and their antagonistic position. Slithering golden eyes with slit pupils and purple circles around the corners give them an unsettling aspect. They have a snake-like appearance.

On this list, Gowther is one of the few characters who has declared themselves to be Neutral. This series is called Nanatsu no Taizai, or Seven Deadly Sins. In the Seven Deadly Sins, Gowther is Goat’s Sin of Lust and a member of the Goat. For much of the show, we took them for human, but after the series ended, it was revealed that they were actually a magical doll made by a great wizard. Between or near the end of season 1, they appeared in the series for the very first time.

Gwother first displayed non-human behavior, speaking with a robotic voice devoid of expression. Even when confronted with a terrifying scenario, their faces remained unchanged. When the play progressed, they began to express their feelings and came to appreciate the true value of friendship. The friendship between Meliodas and Ban is also observed by Gowther, who appears to be trying to learn something from it.