Ginga Nagareboshi Gin is the perfect choice for dog fans looking for a classic animation. A dog is the story’s protagonist for the first time in one of the medium’s rare human-centered narratives.

Despite his small stature, Gin, the protagonist, is an Akita Inu pup who displays his worth in the struggle against a wild bear that is threatening the land and the people who live there. After proving his mettle, he eventually takes the reins as the pack’s leader. Gina Legend Weed, a follow-up to Gina Legend in 2005, tells the story of Gin’s kid Weed, a puppy searching for his father and protecting humans in the Ou Mountains of Japan. If you like dogs, you should see these two anime series if you ever get the chance.

But if you’re interested in watching this anime, the best option is to get dubbed Japanese episodes, as American fans were denied access to critical plot events and character deaths because the American version was edited for violent scenes.

Another anime with a canine protagonist, but one that is much more recent, is Dog and Scissors, also known by its fans as InuHasa. The main character, Kazuhito Harumi, was originally a human high school student who loved books. Kazuhito sacrifices his life to save the life of a girl named Kirihime Natsuno while reading at a cafe one day.

Even though he died before completing his favorite book series, Kazuhito had not yet finished it! As a result of this, he reincarnates himself as a dachshund dog, known as Kuro by the people in his area. He gets adopted by the girl he saved, the only one who can comprehend him as a dog, and it turns out she is a sadist who enjoys tormenting him with scissors.

The anime is a comedy, and a very popular one at that. If you’re looking for a good laugh, or if you’re a dog lover or a book lover, Dog and Scissors is a great choice. 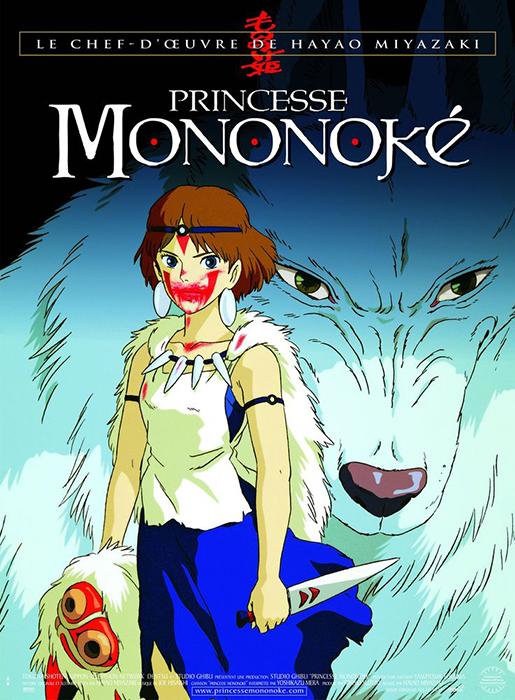 If you haven’t heard of Hayao Miyazaki and his studio, Studio Ghibli, you need to start renting movies. One of his best works is Princess Mononoke, which is revered among anime enthusiasts as a classic.

Hayao Miyazaki became a household name in the United States after the release of this film. Ashitaka, a Japanese warrior, fights and destroys a demon, but only after being cursed by it. While his combat powers are bolstered by the curse, they will eventually lead to his death if the curse is not extinguished.

He meets a wolf clan led by a wolf goddess named Moro and a human girl named San on his quest to find a forest spirit to aid him. Forest spirits are being devoured by the humans’ avarice as they wage a war against humanity. Nature-lovers and those with an interest in Japanese history and mythology will like this animated film, which has well-done creatures and vicious wolves.

Cowboy Bebop, another famous anime, doesn’t feature a dog as prominently as some of the other shows on this list, but it does include a dog in the primary cast, along with his psychotic master. Hacker girl Ed and her genetically-enhanced Welsh dog Ein live together in a little apartment.

Despite the fact that Ed’s dog has the IQ of a human and can theoretically be considered to be more clever than the rest of the human characters in the show, he is rarely given the credit he deserves for saving the main group. Bebop is the name of a spacecraft that houses a crew of bounty hunters that are on a mission to capture criminals around the cosmos and bring them to justice.

Anime fans often refer to Cowboy Bebop as a “gateway” series since it attracts newcomers to the genre and encourages them to watch more. Bounty hunters, rivals, action, and humor abound in this sci-fi anime, making it ideal for viewers of all ages. Anyone who claims to be a lover of anime should definitely check this one out. Lieutenant Riza Hawkeye’s dog, Black Hayate, is as devoted to her as she is to her superior commander. Even though he’s still a pup, the anime’s Black Hayate proves his worth as a military canine. When Den was injured, he was given a new leg by the main character’s engineer, a young girl named Winry, who is an expert in robotic limbs. Winry’s family and friends rely on him as a personal bodyguard and perfect pet.

Finally, there’s a dog named Alexander, who can’t be talked about too much without revealing a plot spoiler. To put it another way, Alexander will swiftly make you feel so devoted to him that you will want to cry. It’s possible that you’ll need tissues when you get to his episode.

Naruto follows the life of a youngster who is said to have the spirit of a demon inside of him, and he does so with great care. While growing up, this young ninja intends to prove the people in his village incorrect by becoming the strongest and most feared ninja in the area. Akamaru’s coolest quality is that he can impersonate his master, Kiba, when he uses a specific jutsu. The two can even merge into a two-headed wolf monster if necessary.

Kiba Inuzuka’s ninja dog Akamaru is his closest companion and greatest friend. At the start of the series, Kiba can carry him around on his head or inside his jacket, but by Part II of the Naruto storyline, he is large enough for Kiba to ride on his back. When it comes to scent, hearing, and chakra level detection, Akamaru is on another level. Kiba uses him as a useful asset in dangerous situations.

Akamaru pees on opponents and tracks them to aid Kiba in keeping track of opponents.

There are pups among the variety of animals that live at the home of Kiba and Tamaki in this season’s epilogue.

Aliens known as Amanto have invaded Earth, overthrown the Japanese government, and prohibited the samurai’s right to carry swords. As a result, the Japanese are being treated like slaves in what amounts to little more than a factory.

In the odd jobs shop Yoruzuya Gin-chan Gintoki Sakata, Shinpachi Shimura, and Kagura are a trio of self-employed misfits. Their services range from finding lost kittens to saving the planet for the right price. They work with a huge white dog named Sadaharu.

Even though Sadaharu doesn’t appear to be much from the front, the camera zooms out to reveal his immense size. Also, Sadaharu is an inugami, which is a dog-god. Among his many intriguing abilities is the ability to grow even bigger by consuming strawberries and milk. One oddity in the story is that the main character Sadaharu enjoys biting the heads of other characters in the show.

Yatterman is a must-watch if you’re looking for the finest anime with dogs. Skull Stone, a mystery stone that appears in this series, is spread over the world. It has the potential to identify the location of the world’s greatest gold trove. There are three villains on the hunt for the stone, but they are being thwarted by the team of Gan-chan, Ai-chan, and their giant mechanical dog Yatter-Wan.

Iron pellets fired out of his nose, fire extinguishers strapped to his back, and an army of mini-robot allies assist Yatter-Wan fight off the baddies. Gan-chan, a mechanic and the son of a famous toy designer, constructed the dog-shaped prototype robot.With Yatter-help, Wan’s Gan-chan and his sweetheart Ai-chan go up against the nefarious Dorombo Gang and their goons. The Yatterman are a ragtag group of decent samaritans. Dog anime Casshern is one of the best, and follows an assassin named Casshern. The robot society that rules the planet begins to rust and decay after Casshern murders Luna. Everything and everyone was engulfed in a blanket of death and sadness.

The only person who is unaffected by the affliction, which becomes known as “The Ruin,” is Casshern. In an attempt to figure out how the plague came to affect the entire mechanical civilization, he starts on a quest to find out if he was the one who set off this horrific chain of events.

While on a mission to rescue a group of robots, Casshern discovers that they are all living peacefully in a community of robots that have opted to accept their inevitable demise. To keep Casshern from doing more damage, Friender, who hasn’t yet shown signs of his own demise, decides to follow him.

Excel Saga completes my list of the best dog-themed anime. It’s a great show for the whole family to watch. To please Ilpalazzo, Excel would do anything and everything she can. Casshern Sins, on the other hand, has a darker tone.

He plans to conquer the world. Excel’s misadventures take her and her partner, Hyatt, who always seems to be dying, all around the world. In the course of their journey, they encounter a number of weird characters and find themselves in a number of strange situations. Everything is goofy and bizarre, as any kind of anime or entertainment genre gets mocked and spoofed frequently.

Although Menchi doesn’t have as many superpowers as some of the other dogs on this list, she is a highly clever and independent pup who excels in her role as Excel’s companion. On more than one occasion, Excel refers to Menchi as “emergency rations.” Despite this, Menchi manages to get out from Excel’s grasps and go on adventures with other dogs and even a third party human!